To support the launch of Intel's latest 12th generation 'Alder Lake' processors, Intel has also pulled the trigger on its latest Z690 motherboard chipset. Using a new LGA1700 socket, some of the most significant advancements with Alder Lake and Z690 include PCIe 5.0 support from the processor, as well as a PCIe 4.0 x8 link from the processor to the chipset. In this article, we're taking a closer look at over 30+ different DDR4 enabled motherboards designed to not only use the processing power of Alder Lake but offer users a myriad of high-class and premium features.

As we typically do with a new platform launch, we reached out to every motherboard vendor for all the information on its Z690 models, including images, specifications, power delivery information, and features. With new chipset launches, vendors usually have its 'launch day' models and models that come later on. In this overview, we've compiled all the information we have into a single article with information we've received at the time of writing.

For users looking for our overview of DDR5 supported Z690 models, the link can be found below:

With the introduction of Intel's 12th generation Core processors, one of the most significant advancements from the previous generation is that Alder Lake built on the 'Intel 7' manufacturing process, includes a hybrid PCIe lane layout. This consists of a total of x16 PCIe 5.0 lanes from the CPU set aside for graphics in either an x16 or x8/x8 configuration, and 4x PCIe 4.0 lanes dedicated to storage devices. Another significant improvement over the previous generation is a new PCIe 4.0 x8 DMI link between the CPU and the Z690 chipset. Previously with 11th gen (Rocket Lake), Intel upheaved it from a PCIe 3.0 x4 uplink on Z490 to a PCIe 3.0 x4 uplink on Z590. With Z690, the uplink is now fully-fledged PCIe 4.0 x8 lanes to interconnect things. 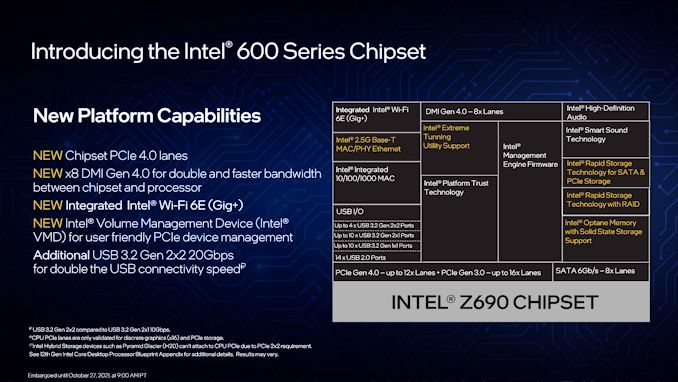 One of the most exciting and perhaps specific improvements is Intel's first DDR5 supported desktop platform. Intel's Alder Lake and Z690 combined actually offer support for both DDR5 and DDR4 memory. This means that those motherboard vendors either have to build their motherboards for one or the other, so it's Z690 with DDR5 or Z690 with DDR4, and no in-between. This article focuses purely on the DDR4 motherboards.

Other features with Z690 include native support for USB 3.2 Gen2x2 (20 Gbps) Type-C connectivity, with the vast majority of Z690 models now opting to include this support at a base level. Intel has also upgraded its networking support at the chipset level, with an integrated Wi-Fi 6E PHY and RF for vendors. However, the majority of the cost and implementation still rely on vendors using Intel solutions through the proprietary CNVi connection. This is why some models include varying levels of Wi-Fi 6/6E CNVi at its disposal as either a feature-boosting move or cost-cutting measure to reduce it.

Compared with previous generations of Intel's chipsets, the Intel Z690 is based on its 14nm manufacturing process, so it's similar to previous designs such as Z590 and Z490. Intel retains the same dual-channel memory support as previous and other brand's desktop platforms. In contrast, native SATA support has been upped to eight SATA slots instead of six of the prior generation.

Focusing on networking, Intel has upgraded to an integrated Wi-Fi 6E MAC over Wi-Fi 6 in the last two previous generations. While Intel states that it includes an integrated 2.5 GbE MAC/PHY, this is a little nonsensical, as wired ethernet still requires a MAC/PHY as an attached PCIe controller. This means regardless of whether a vendor is using a Gigabit, 2.5 GbE, or even 10 GbE, it connects the exact same way to the PCIe interface. 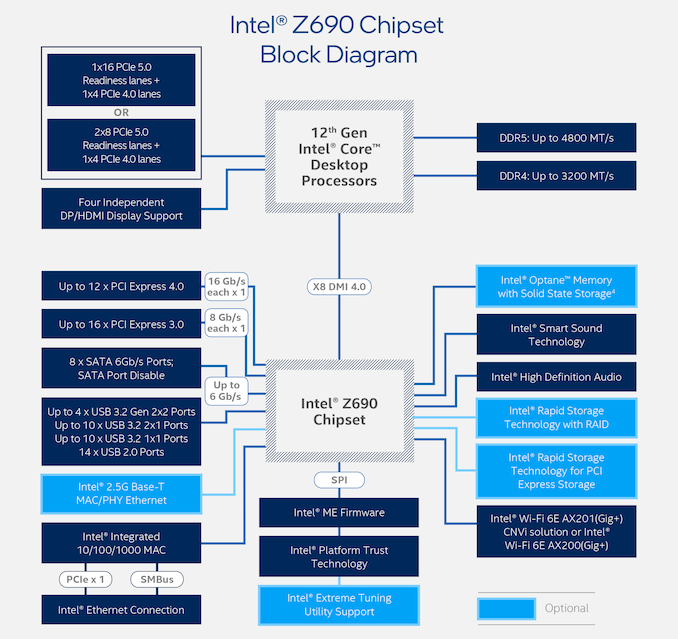 Looking at the above Intel Z690 chipset block diagram, we can see the PCIe 4.0 x8 DMI interconnecting the processor with the chipset, with 16 x PCIe 5.0 lanes to either one full-length slot (x16) or two full-length slots (x8/x8), with 4 x PCIe 4.0 lanes designated to storage devices such as NVMe M.2 slots. (Ian has confirmed that storage on the main x16 slot is possible if desired.)

Intel is also offering an enhanced overclocking model available with Alder Lake, which takes Processor Base Power (Base) and Maximum Turbo Power (Turbo) into account. The Base is the guaranteed peak power at base frequency which for the Intel Core i9-12900K is set at 125 W, whereas the maximum available Turbo Power is 241 W. Users with a basic understanding of Intel's former PL1 and PL2 methodology will note that it still exist under the hood - the base power is PL1, whereas Turbo is PL2. Tau, the time for turbo, is practically infinite for the unlocked K processors.

When it comes to overclocking in the current day and age, the main factors in play are still the same: cooling, capability, and power. As we saw with overclocking on numerous Z590 motherboards throughout the year, it was possible to pull nearly 500 W from the wall from the system when testing them. Using figures from our MSI MEG Z590 Ace motherboard review as an example, we were pulling 321 W peak power from the wall at default with CPU load only. In contrast, at 5.2 GHz all-cores with 1.425 V on the CPU VCore, we pulled 485 W. Overclocking with any platform, Intel or even AMD, adequate cooling needs to be considered for the designed core frequency and CPU VCore voltage combination, as well as equally sufficient power headroom from the power supply.

Through our contact with vendors, more than 30+ models are available Z690 using the existing DDR4 type memory. Most of these have currently been announced and detailed, with a small number waiting to be revealed or without specifications to date. While there are more DDR5 enabled models on Z690 at present, there is still a wide variety of DDR4 enabled models available to select from. The main advantage that DDR4 has over DDR5 at present is pricing, with DDR4 seemingly more affordable at present.

At present, there are no E-ATX sized Z690 models with support for DDR4 memory, and we don't expect this to change either. We do however expect there to be more announcements on other sized models, but we will keep this overview (DDR4), and the DDR5 version which we will update at least weekly with new models and information.

Let's take a look at the current Z690 product stack with support for DDR4 (at the time of writing):

ASRock's product stack for DDR4 on Z690 is one of the largest of the 'major' vendors at launch, with a total of nine. This is more than ASRock's DDR5 offering, surprisingly. Choice is a big factor here though with ASRock offering ATX, mATX, and mini-ITX models . The most premium of the DDR4 options is perhaps the ASRock Z690 Extreme WIFI 6E and Z690 Steel Legend WIFI 6E models with the latest Wi-Fi 6E CNVi, three PCIe 4.0 x4 M.2, and eight SATA ports.

While it remains to be seen if ASRock releases more Z690 models with DDR4 support, there's plenty of entry-level models to choose from. One that catches our interest is the ASRock Z690M-ITX/ax which is a mini-ITX sized option, but with a Wi-Fi 6E CNVi, and even includes a BIOS Flashback button for users looking for an easy way to flash the board to the latest BIOS version. The ASRock Z690 PG Riptide is on a similar level to the Extreme and Steel Legend models, with eight SATA ports, but without any wireless connectivity. The ASRock Phantom Gaming 4 (ATX) and Z690M Phantom Gaming 4 (mATX) offer a solid and affordable entry point to the Alder Lake platform.

It's clear that ASUS has put most of the focus on users planning to buy DDR5 memory for Alder Lake, but it does have a small selection of DDR4 supported Z690 models. The most premium of these is the ASUS ROG Strix Z690-A Gaming WIFI D4 with a Wi-Fi 6 CNVi, USB 3.2 G2x2 Type-C support, four PCIe 4.0 x4 M.2 slots, as well as a premium SupremeFX ALC4080 HD audio codec and Savitech amplifier pairing for the onboard audio. Its TUF Gaming series occupies the mid-range with a model with WIFI and without, but with four PCIe 4.0 x4 M.2, and dual Type-C connectivity on the rear panel (3.2 G2x2 & G2).

Operating as mid-range and entry-level models is the Prime series, with the Z690-P WIFI D4 offering Wi-Fi 6, or without this for a slightly cheaper price. ASUS doesn't have any DDR4 enabled Z690 models in mini-ITX, but for users looking to build a smaller system with Alder Lake and DDR4, the ASUS Prime Z690M Plus D4 offers three PCIe 4.0 x4 M.2 slots, four SATA, and support for DDR4-5333 memory out of the box.

Like in our DDR5 based Z690 overview, GIGABYTE also has the largest stack of DDR4 models with a total of 11 present at the launch of Alder Lake. A lot of GIGABYTE's DDR4 offerings are essentially duplicates of its DDR5 models, with exception of the GIGABYTE Z690M Elite AX and Elite DDR4 models which are bespoke to DDR4. The AX model has a Wi-Fi 6 CNVi, while the non-WIFI version is a little bit cheaper. GIGABYTE has also made one mini-ITX model available, the GIGABYTE Z690I Aorus Ultra DDR4, with Wi-Fi 6, dual PCIe 4.0 x4 M.2 ports, and an advertised 13-phase power delivery.

Looking at the mid-range of GIGABYTE's DDR4 offerings for Alder Lake, the Z690 Aorus Pro DDR4 and the Z690 Aero G DDR4 offer competitive and similar features, but the latter is more targeted towards content creators over gamers. Occupying the entry-level segment of its models is the Ultra Durable (UD) series. Offering three models but with different levels of wireless CNVi support, or without, they all feature three PCIe 4.0 x4 M.2 slots, USB 3.2 G2x2 Type-C connectivity, and a Realtek RTL8125 GbE controller.

Despite offering a pretty comprehensive stack for DDR5 memory, its DDR4 range of Z690 models is limited to just five at the time of writing. The most premium of these represents its 'Performance Gaming' series - the MPG Z690 Edge WIFI DDR4 with an advertised 18-phase power delivery, four PCIe 4.0 x4 M.2 slots, as well as eight SATA ports and an Intel Wi-Fi 6 CNVi. Another mainstay that is available in both DDR5 and DDR4 formats is the Z690 Tomahawk WIFI, which actually drops integrated RGB LEDs in favor of a svelte all-black aesthetic. It's a solid-looking model with Wi-Fi 6, three PCIe 4.0 x4 M.2, and six SATA which offers an affordable mid-range platform for those upgrading to Alder Lake.

Looking further down the stack is the MSI Pro Z690-A WIFI which offers both Wi-Fi 6E and 2.5 gigabit Ethernet, as well as three PCIe 4.0 x4 M.2 and six SATA ports. All of MSI's options include rear-panel USB 3.2 G2x2 Type-C connectivity, from the top to the bottom on its DDR4 models, and is a big benefit of the Z690 chipset. The entry-level MSI Pro Z690-P DDR4 offers an affordable entry point onto Alder Lake for those looking to use DDR4 memory, with a solid feature set for a designated price of $220.

There are also a small number of Z690 models to consider outside of the major players.

Biostar has two DDR4 enabled Z690 motherboards for the launch of Alder Lake with the Z690A Valkyrie. It has plenty of premium features and a different aesthetic from those outside of the major vendors. Colorful to date has also announced one Z690 model for those looking to use DDR4 memory, the Colorful iGame Z690 Ultra, which targets entry-level users.

Each subsequent page is a brief analysis and rundown of each model announced, culminating with a conclusion of board features versus other models.