Sitting at the entry-level of the Z690 models from ASUS for the launch of Intel's 12th generation of desktop processors are the ASUS Prime Z690-P WIFI D4 and Prime Z690-P D4. Both of these models share an identical PCB and aesthetic, with all the same features except one. The Z690-P WIFI includes an Intel Wi-Fi 6 CNVi, while the Z690-P does not. Focusing on the design, the Prime Z690-P WIFI and Z690-P include a black and white patterned PCB, with simplistic silver heatsinks with diagonal lines that fit and match with the rest of the PCB. There is no fancy RGB LED lighting integrated into any section of the board, but ASUS does include three addressable RGB headers and two Aura RGB headers for users to add their own. 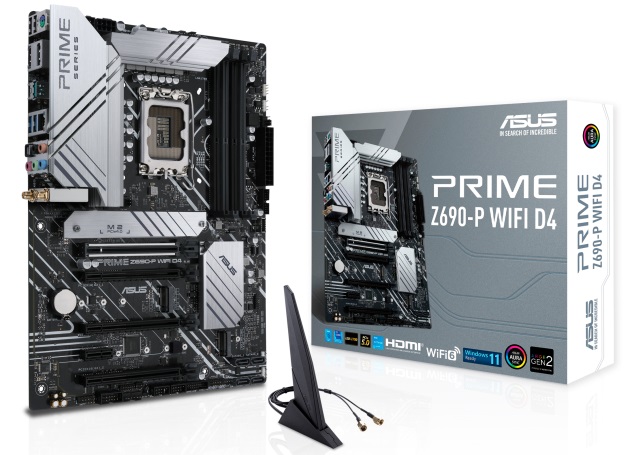 Included for PCIe support is a total of five slots that consists of one full-length PCIe 5.0 x16 slot, one full-length PCIe 4.0 x4 slot, two full-length PCIe 3.0 x4 slots, and one smaller PCIe 3.0 x1 slot. For storage, there's three PCIe 4.0 x4 M.2 slots, with one of these supporting SATA drives too. Both the ASUS Prime Z690-P WIFI and Z690-P also include four straight-angled SATA ports that can support RAID 0, 1, 5, and 10 arrays. ASUS has also provided four memory slots that are capable of supporting up to DDR4-5333, with a combined capacity of up to 128 GB.