The Pro RS series is a completely new model from ASRock which is debuting on Intel's Z690 platform. It is one of its simplest models in terms of aesthetics and features and targets users on a budget looking to make the most of Alder Lakes big P and little E cores. Focusing on the aesthetic, the ASRock Z690 Pro RS has a black and grey patterned PCB, with black heatsinks, and an RGB enabled chipset heatsink. 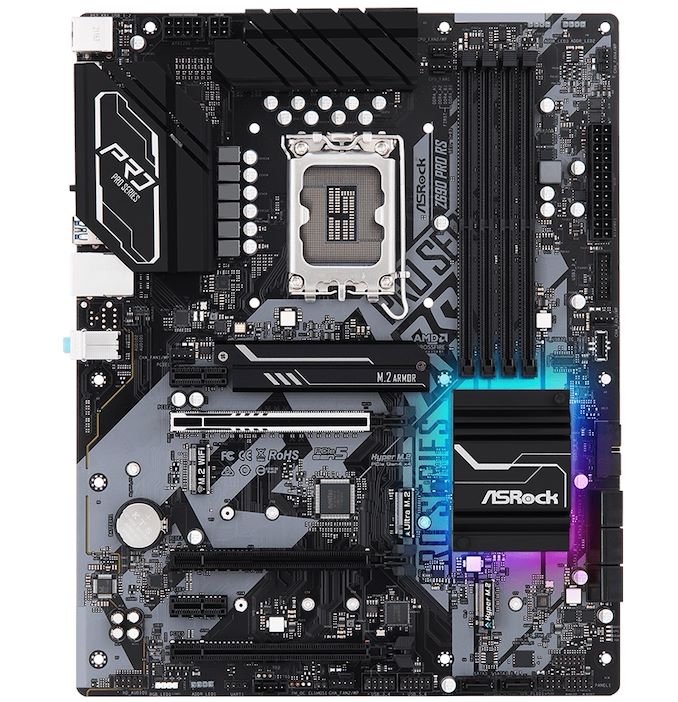 The ASRock Z690 Pro RS has three full-length slots, including one operating at PCIe 5.0 x16, one at PCIe 4.0 x4, and one at PCIe 3.0 x4, with one smaller PCIe 3.0 x1 slot. The Pro RS, the Steel Legend, and Extreme Z690 DDR4 models share pretty much the same feature set, with eight SATA ports, and three M.2 slots. The M.2 slot array includes two with support for PCIe 4.0 x4 drives, with one operating at PCIe 3.0 x4 with support for SATA too. For memory, there are four memory slots capable of supporting DDR4-5000, with a combined capacity of up to 128 GB.

The rear panel has no Type-C connectivity, but ASRock does include a front panel USB 3.2 G2x2 Type-C header. In terms of what is on the rear panel, there are two USB 3.2 G2 Type-A, two USB 3.2 G1 Type-A, and two USB 2.0 ports. ASRock includes a pair of video outputs for integrated graphics users including an HDMI 2.1 and DisplayPort 1.4 output, with a Realtek ALC897 HD audio codec powering three 3.5 mm audio jacks. Networking is handled by a single Realtek RTL8125BG 2.5 GbE controller, while the Z690 Pro RS also includes a PS/2 combo port and a small BIOS Flashback button.