The MSI Pro series of motherboards represent a more modest pathway to the Z690 chipset, with a lower entry-level price, more modest features when compared to the MPG series, but on a similar level to its MAG gaming-focused series. Both the MSI Pro Z690-A WIFI DDR4 and the Pro Z690-A DDR4 share the same aesthetic and core feature set, which includes a primarily black color theme with a professional-looking silver strip going along the rear panel cover. As the Pro series is aimed at professional users and functionality over style, MSI hasn't included integrated RGB LED lighting. The only difference between both models is the WIFI model includes a networking CNVi, while the standard Z690-A does not. 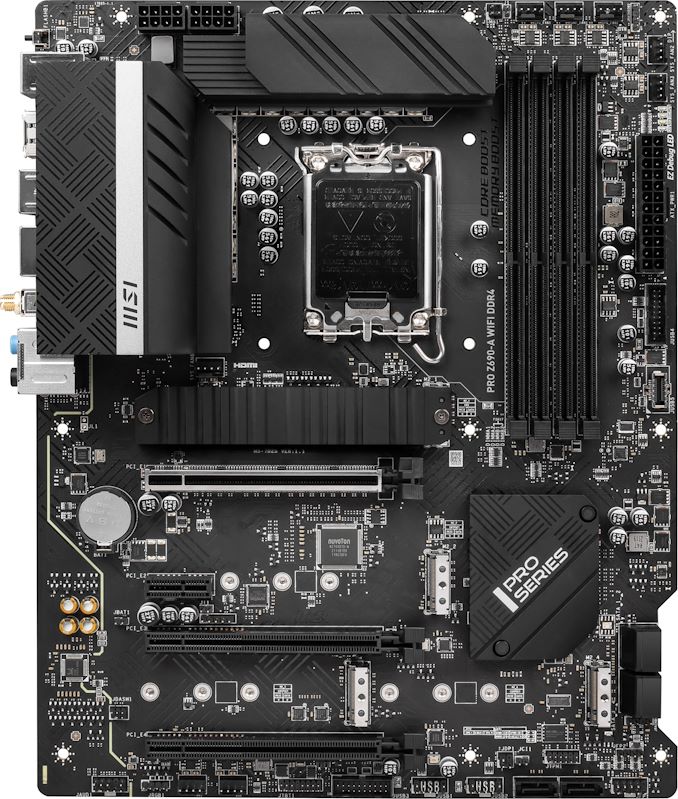 Looking at PCIe support, both models include one full-length PCIe 5.0 x16 slot, two full-length PCIe 3.0 slots but MSI hasn't shared the configuration, and a smaller PCIe 3.0 x1 slot. Storage options include three PCIe 4.0 x4 M.2 slots, with one PCIe 3.0 x4 M.2 slot and six SATA ports, which support RAID 0, 1, 5, and 10 arrays. In the top right-hand corner of the board are four memory slots that are capable of supporting up to DDR5-6400, with a maximum combined capacity of 128 GB.

Most of the input and output on the Pro Z690-A WIFI DDR4 and Pro Z690-A DDR4 is the same including one Intel I225-V 2.5 GbE controller, and the WIFI model does include an Intel AX210 Wi-Fi 6E CNVi. The rest includes one USB 3.2 G2x2 Type-C, one USB 3.2 G2 Type-A, two USB 3.2 G1 Type-A, and four USB 2.0 ports. For integrated graphics, there's one HDMI 2.1 and one DisplayPort 1.4 video output pairing, while an unspecified HD audio codec controls six 3.5 mm audio jacks. Finishing off the rear panel is a PS/2 combo port for legacy peripherals and a small BIOS Flashback button.