The ASUS Prime Z690M Plus D4 is essentially a micro-ATX sized version of the ASUS Prime Z690-P D4 model. It shares a very similar design, with silver heatsinks, a black and light grey patterned PCB, and it uses a small silver heatsink to keep the chipset cool. The Prime Z690M Plus D4 uses a modest feature set, with all the benefits of the 12th generation processors and the Z690 chipset, including PCIe 5.0 support, USB 3.2 G2x2 Type-C, but in a modestly affordable micro-ATX sized package. 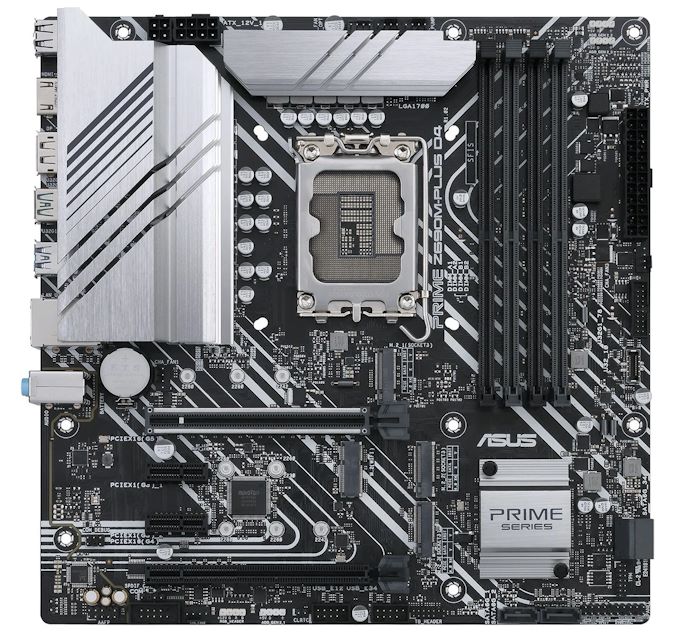 Looking at PCIe support, ASUS includes one full-length PCIe 5.0 x16 slot, one full-length PCIe 4.0 x4 slot, and two smaller PCIe 3.0 x1 slots. In the top right-hand corner are four memory slots that have support for DDR4-5333, with a maximum combined capacity of 128 GB. Focusing on storage options, there are a total of three M.2 slots, with all three supporting PCIe 4.0 x4 M.2 drives, while one of these also allows SATA-based M.2 drives to be used. For conventional SATA devices, ASUS includes four SATA ports, with two featuring right-angled connectors and two with straight angled connectors.

On the rear panel of the ASUS Prime Z690M Plus D4 is a variety of input and output. This includes one USB 3.2 G2x2 Type-C, one USB 3.2 G2 Type-A, four USB 3.2 G1 Type-A, and two USB 2.0 ports. ASUS includes an HDMI 2.1 and DisplayPort 1.4 video output pairing, with three 3.5 mm audio jacks powered by an unspecified Realtek HD audio codec. Last but not least is the board's networking connectivity, which consists of a single Intel I229-V Gigabit Ethernet controller.