Despite not having a large stack at the moment, Biostar has launched three Z690 models for Intel's Alder Lake desktop platform. Representing one of two premium Z690 models at launch is the Biostar Z690A Valkyrie, which shares the same PCB and primary specifications as the non-A variant. The Biostar Z690A Valkyrie has an 'anime' look of sorts, with a primarily black theme and colorful elements with RGB enabled backlighting in the rear panel cover and chipset heatsink. The Z690A Valkyrie combines a decent controller set, along with all the typical Z690 and 12th gen features such as PCIe 5.0, and opts for DDR4 memory support over the DDR5 supported non-A Valkyrie model. 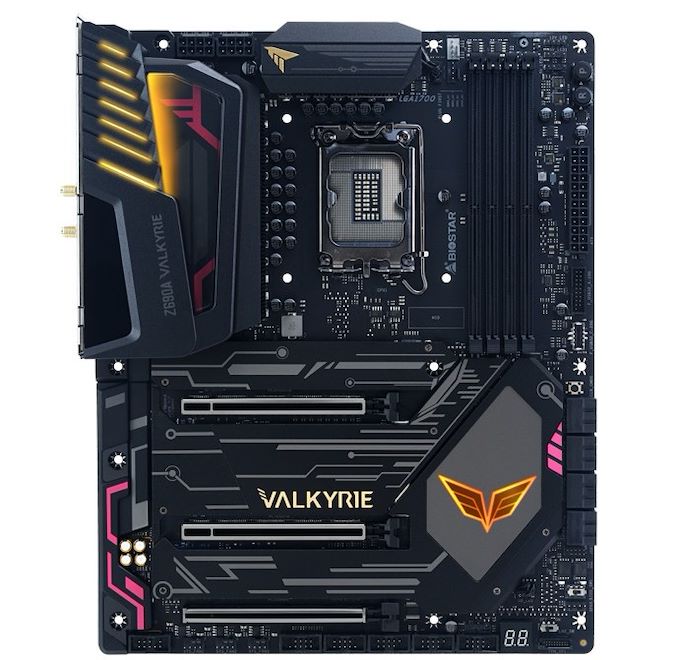 The Biostar Z690 Valkyrie has plenty of PCIe slot expansion slot real estate, including two full-length PCIe 5.0 slots that can operate at x16 and x8/x8, with a third full-length PCIe 4.0 x4 slot. Storage options include a total of four PCIe M.2 slots, including three PCIe 4.0 x4 M.2 slots, one PCIe 3.0 x4 M.2 slot, and eight SATA ports. Biostar also includes four memory slots which can be found in the top right-hand corner, with support for DDR4-5000 and a maximum capacity of up to 128 GB.

On the rear panel is a high-speed USB 3.2 G2x2 Type-C port and a total of seven USB 3.2 G2 Type-A, with plenty of options for integrated graphics. For those users, Biostar includes two DisplayPort 1.4 and two HDMI 2.0 video outputs which shows lots of potential integrated GPU support. On the networking front, there's one Intel I225-V 2.5 GbE port, and although it has the connectors for a Wi-Fi 6E CNVi, Biostar isn't clear on whether the Z690A Valkyrie actually includes the CNVi; the rear panel says yes, but the specifications say no Wi-Fi 6E card is included. Finishing off the rear panel are five 3.5 mm audio jacks and S/PDIF optical output powered by a Realtek ALC1220 HD audio codec, as well as a PS/2 combo port.