Out of all the vendor's mini-ITX sized options, ASRock is typically hot off the press on providing a varied selection of small form factor offerings at the launch of a new chipset. While the ASRock Z690 Phantom Gaming-ITX/TB4 caters primarily to the higher end of what's available on Z690, the ASRock Z690M-ITX/ax offers incredible value, specifications, and features for users looking to use DDR4 over DDR5 memory. Focusing on the design, the Z690M-ITX/ax follows a black and silver theme, with a black PCB and silver heatsinks, with the power delivery heatsink doubling up as a rear panel cover. 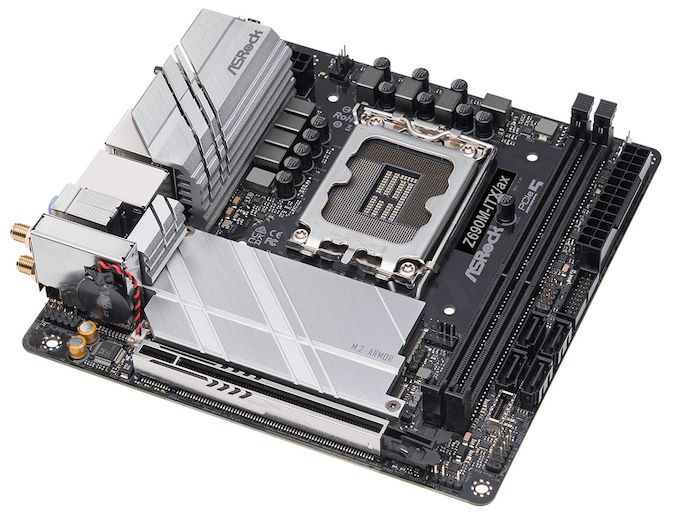 As it's a mini-ITX sized motherboard, it has just one full-length PCIe 5.0 x16 slot, but it does include two M.2 slots. One of the M.2 slots operates at PCIe 4.0 x4, while the second slot supports both PCIe 4.0 x4 and SATA drives. For conventional SATA-based storage and devices such as optical media, ASRock includes four SATA ports which include support for RAID 0, 1, 5, and 10 arrays. There are just two memory slots available for users, with support for up to DDR4-5000 and a combined capacity of up to 64 GB.

On the rear panel is a single USB 3.2 G2x2 Type-C port, with a second G2x2 Type-C available via a front panel header. Also featured are four USB 3.2 G2 Type-A and two USB 2.0 ports. Networking support consists of two Ethernet ports, one powered by a Realtek RTL8125BG 2.5 GbE controller and a second by an Intel I229-V Gigabit controller. ASRock also includes a Wi-Fi 6E CNVi which offers support for both wireless and BT 5.2 devices. For users looking to use integrated graphics, there is an HDMI 2.1 and DisplayPort 1.4 video output pairing, while three 3.5 mm audio jacks are powered by a Realtek ALC897 HD audio codec. Finishing off the rear panel is a small BIOS Flashback button.