Colorful which primarily targets the Asian market also have a model ready for the launch of Alder Lake. Typically Colorful's options are limited but very funky in design and the latest Colorful iGame Z690 Ultra (DDR4) is no exception to this. Equipped with a very modest range of features and controllers, it's aimed at the entry-level, but it has plenty of pizazz. On the design side, Colorful has gone with a white, silver, and grey aesthetic, with multiple areas of integrated RGB LED lighting. The iGame Z690 Ultra (DDR4) features a wave-themed design on its power delivery heatsinks, with a U-shaped M.2 and chipset heatsink combined. Colorful is also advertising a 19-phase (18+1) power delivery, with dual 8-pin 12 V ATX CPU power inputs.

The only difference between the iGame Z690 Ultra D5 and the Z690 Ultra is the latter has support for DDR4 memory, while the D5 model signifies that it supports DDR5 memory. Other than memory support, both models share the same feature, controller set, and aesthetics throughout. 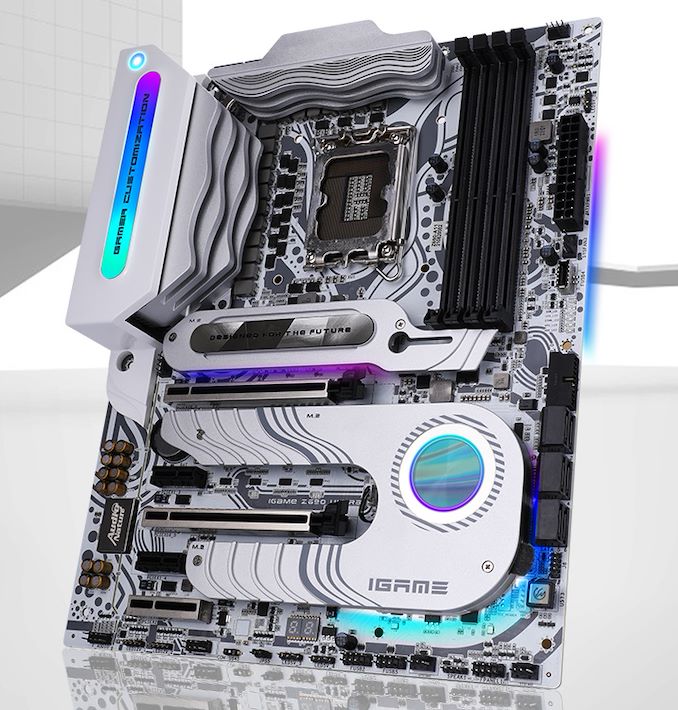 Looking at the feature set, Colorful isn't clear here on the expansion slots, as they sent us details with PCIe 4.0 and PCIe 3.0 slots, despite Alder Lake and the Z690 chipset offering PCIe 5.0 support. The top two full-length slots (PCIe 5.0/4.0) can operate at x16 and x8/x8, while the board also includes a half-length PCIe 3.0 x4 and two PCIe 3.0 x1 slots. Storage options include three PCIe 4.0 x4 M.2 slots, with six SATA ports capable of supporting RAID 0, 1, 5, and 10 arrays. Looking at memory support, Colorful has only given us compatibility of speeds of DDR4-3200, which could mean it has yet to QVL list various memory kits, but we do know the four memory slots can accommodate 128 GB of capacity.

While we don't currently have a rear panel image for the Colorful iGame Z690 Ultra (DDR4), we know that it includes one USB 3.2 G2x2 Type-C, four USB 3.2 G2 Type-A, and two USB 2.0 ports. Networking is handled by an Intel I225-V 2.5 GbE controller and unspecified Wi-Fi 6 CNVi, while Colorful lists an 8-channel HD audio codec for the onboard audio.

We will update this page when we receive more information.