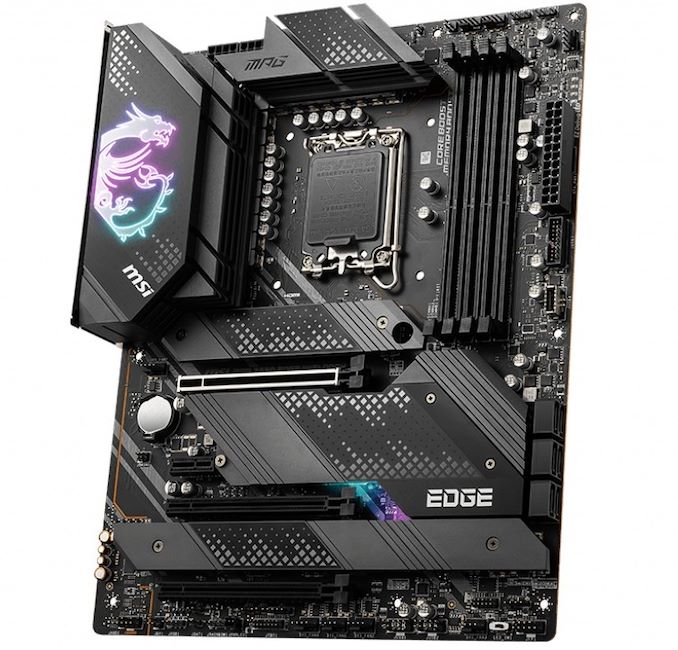 Dominating the lower portion of the board are the PCIe slots. MSI includes one full-length PCIe 5.0 x16 slot, two full-length PCIe 3.0 slots electronically locked down to x4, while MSI also includes one smaller PCIe 3.0 x1 slot. For storage, MSI includes four PCIe 4.0 x4 M.2 slots, each with M.2 heatsink coverage, as well as eight SATA ports, Six of these support RAID 0, 1, 5, and 10 arrays, while the other two are powered by an ASMedia ASM1061 SATA controller. Located in the top right-hand corner of the board are four memory slots, which can support up to DDR4-5200 with a maximum capacity of up to 128 GB.

On the rear panel are one USB 3.2 G2x2 Type-C, five USB 3.2 G2 Type-A, and two USB 2.0 ports. Powering the onboard audio which consists of five 3.5 mm audio jacks and S/PDIF optical output is a Realtek ALC4080 HD audio codec while networking options consist of an Intel Wi-Fi 6 CNVi and Intel I225-V 2.5 GbE controller. MSI also includes a pair of video outputs consisting of an HDMI 2.1 and DisplayPort 1.4, while a small BIOS Flashback button finishes off the rest of what's on the rear panel.