From all of ASRock's offerings supporting the launch of Intel's 12th generation of Alder Lake processors, the Z690 PG Riptide is perhaps the most premium of its Phantom Gaming series that uses DDR4 memory. Looking at the design of the ASRock Z690 PG Riptide, it has a cool RGB-enabled logo built into the chipset heatsink. It's using a pair of black power delivery heatsinks, with one of these doubling up as the board's rear panel cover. As with all of ASRock's Z690 models, it is including its patent-pending GPU holder, which is designed to reduce sag when used with heavy and long graphics cards. 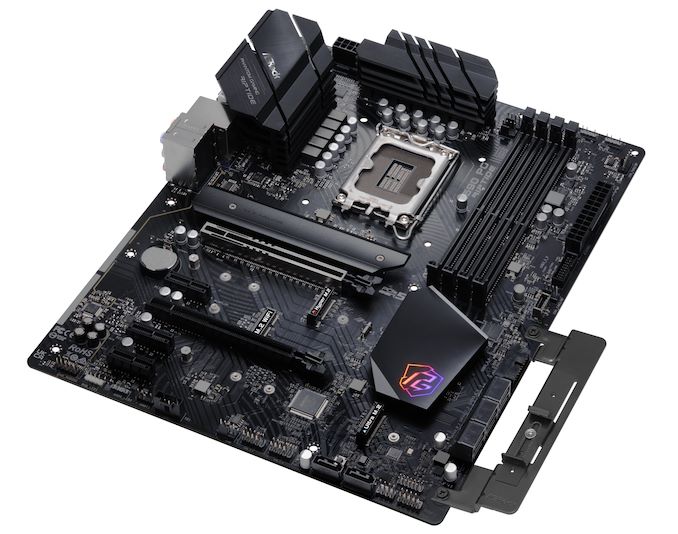 For PCIe devices, ASRock includes one full-length PCIe 5.0 x16 slot, with a second full-length PCIe 4.0 x4, and three smaller PCIe 3.0 x1 slots. Exploring the board's storage options, there's a total of three M.2 slots, with two supporting PCIe 4.0 x4 M.2 drives, and one with support for PCIe 3.0 x4 and SATA varieties. There are also eight SATA ports with support for Intel RAID 0, 1, 5, and 10 arrays. Located in the top right-hand corner are four memory slots, with support for DDR4-4800, and a combined capacity of 128 GB.