One of ASRock's more modest and entry-level gaming-focused Z690 models comes via the Z690 Phantom Gaming 4 DDR4. Equipped with an entry-level feature set, and an equally entry-level price point to boot, the ASRock Z690 Phantom Gaming 4 DDR4 has one of the more basic looks of all its Z690 models. It uses a primarily black theme with a black and dark grey printed PCB, with separate black metal power delivery heatsinks, with a small RGB enabled chipset heatsinks which users can customize with ASRock's Polychrome RGB software. There are two versions of this model, one with support for DDR5 memory, and one with support for DDR4 memory; this one supports DDR4 memory only. 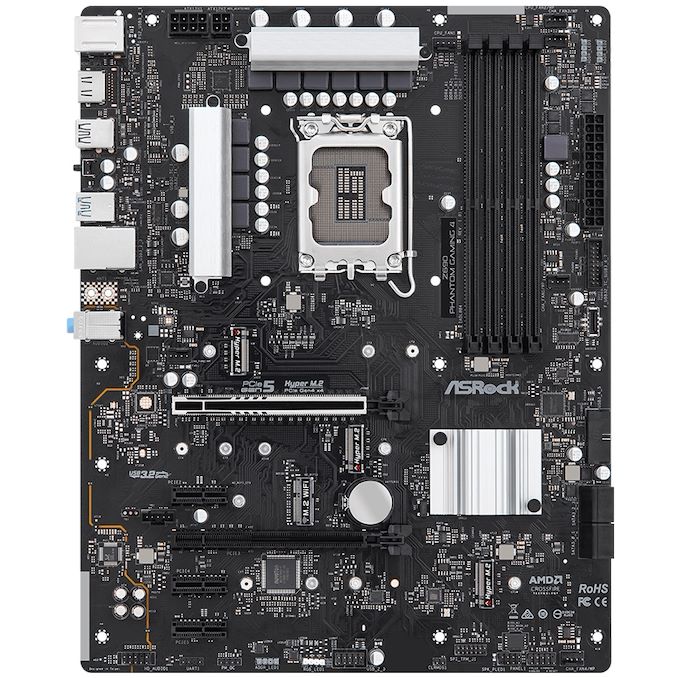 Looking at the board's specifications, there are two full-length PCIe slots, with one full-length PCIe 5.0 x16 slot, one full-length PCIe 4.0 x4 slot, and three smaller PCIe 3.0 x1 slots. Located in the top right-hand corner is the board's memory slots, with four in total offering support for DDR4-5000, and a combined total of 128 GB. Storage options are relatively basic as expected for a board of this pedigree, with three PCIe 4.0 x4 M.2 slots, with one of these also supporting SATA-based drives. The ASRock Z690 Phantom Gaming 4 DDR4 also includes just four SATA ports with support for RAID 0, 1, 5, and 10 arrays.

On the rear panel is a modest selection of input and output, including one USB 3.2 G2 Type-C, one USB 3.2 G2 Type-A, four USB 3.2 G1 Type-A, and two USB 2.0 ports. An Intel I219-V Gigabit Ethernet controller is the board's only source of networking support, while a Realtek ALC897 powers three 3.5 mm audio jacks. Finishing off the rear panel is a single HDMI port, with a small BIOS Flashback button and a PS/2 combo port for users preferring to use legacy peripherals.