The odd-one out from today’s announcement is a processor at the other end of the portfolio. To put it into context, if a user wants to jump on board the 7nm and Zen 2 bandwagon, the entry price point is $199 for the Ryzen 5 3600. Below that we have older hardware based on Zen 1, and AMD’s APU line of processors featuring integrated graphics. The new Athlon 3000G sits firmly in this category, and aims to be a very interesting processor indeed.

The Athlon 3000G is a 35W dual core Zen+ processor with 3 compute units of Vega graphics, built on 12nm and falls in the Picasso family of hardware. It doesn’t have any turbo, but does have a nominal frequency of 3.5 GHz on the CPU and 1100 MHz on the GPU. Supported memory speeds are DDR4-2933 and it can support up to 64 GB. It will come bundled with AMD’s 65W near-silent stock cooler, which is absolutely overkill for this product. 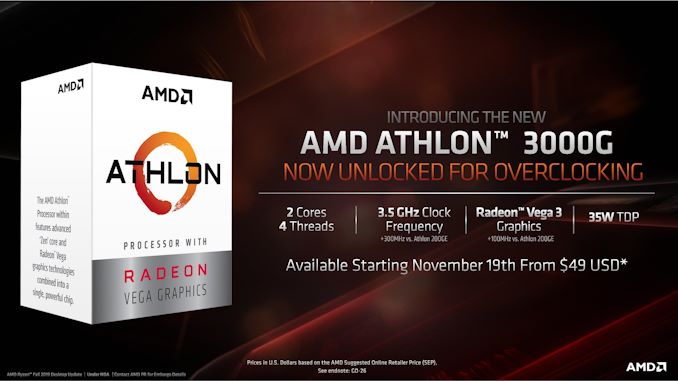 If a dual core Zen+ Picasso APU sounds familiar, it’s because AMD already has a processor that fits the bill: the AMD Athlon 300GE. Following previous convention, I would have expected AMD to call this new processor the 320GE, as it has +100 MHz more on the CPU. However, AMD are changing the naming for two reasons.

First, to align it more with the Ryzen family. With the Ryzen 3000 series starting with the Ryzen 3 3200G for the 65W Zen+ APUs, moving into the Ryzen 5 3600 for the 65 W desktop Zen 2 CPUs, each of these are four digits plus a letter. By moving to 3000G, it allows AMD to equate the two families together (even if there’s still an APU/desktop CPU microarchitecture mismatch).

The other aspect is that the Athlon 3000G is also unlocked. AMD touts the 3000G as the first AM4 Athlon that is fully unlocked for overclocking, allowing users to adjust the CPU multiplier as high as their dreams desire (or to the limits of the silicon). As AMD is pairing the CPU with its 65W cooler, that means a lot of users, as long as the motherboard supports overclocking, should be able to push their CPU a bit higher. AMD stated that the +400 MHz in the slide deck for our briefing would represent a ‘typical’ overclock for an end-user, but then clarified they did use a high-end cooler to achieve that value. Nonetheless, an unlocked $49 chip with a cooler than can handle double the TDP could be exciting for users wanting to test their overclocking skills.

The other feather in AMD’s cap for this new chip is that it competes against Intel’s Celeron and Pentium desktop processors. Given the high demand for Intel's high-end 14nm products, the Pentium and Celeron parts have been available in relatively low in volumes as they don’t make as much money, especially when high-end demand is high. In that instance, AMD has the advantage as the company stated that there will be plenty of Athlon silicon to go around.