In a courageous marketing twist, the next two boards from ASUS for launch hail from its TUF range of boards. The twist comes in the styling, with the brand feeding off of the yellow U in TUF and making that one of the style elements. Interesting it seems like the usual 5-year warranty from TUF boards is down to three years, although this may also be region dependent. Another change from previous TUF models is their segmentation in the market - normally these boards would command a price premium due to the higher warranty and thermal armor protection, but on these models ASUS has ditched this and changed focus to the budget and the gaming side of the market. Apparently, everything has to say 'Gaming'.

The TUF Z370-PRO Gaming and Z370-PLUS Gaming are almost identical, with minor technical and visual tweaks. On the visual side, while the Z370-PRO Gaming has a minor glowing LED strip on the right of the board, the Z370-PLUS Gaming offers RGB lighting in the same area. on the right-hand side of the motherboard, but that’s as far as it goes. An additional RGB strip header is featured on the TUF Z370-PLUS allowing for use with ASUS AURA SYNC compatible strips currently on the market. Both boards feature a black and yellow/orange contrast throughout the PCB. 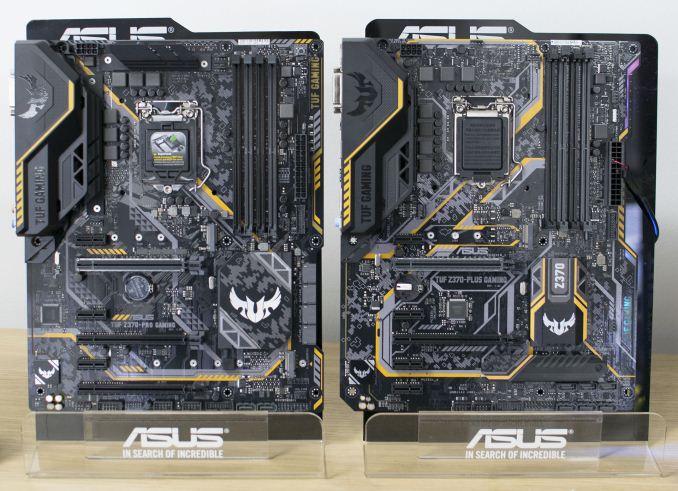 A technical difference comes in the way of PCIe slots; the PRO-Gaming has a total of three full-length PCIe x16 with the top slot featuring SafeSlot metal reinforcement, but the bottom slot runs takes its lanes directly from the chipset, as opposed to the CPU. The Z370-PLUS Gaming has the same SafeSlot protection on the top slot, but omits the third and bottom full-length PCIe x16 slot, instead offering four PCIe x1 slots rather than three. Both boards have support for SLI and Crossfire setups. Storage wise, both boards have six SATA ports as well dual M.2 ports capable of powering PCIe 3.0 x4 SSDs.

Neither board comes with any Wi-Fi capabilities, but they do follow suit with the entirety of the Strix Z370 range and offer a single LAN port via an Intel I219-V gigabit network chip. For audio, ASUS is using the Realtek ALC887 codec rather than the ALC1220 found on the other boards, likely due to pricing. Both boards include a full complement of memory slots, support for DDR4-3866, and support for up to 64GB of UDIMMs - values typical for ATX boards in this end of the stack.

Two USB 3.1 10Gbps ports are featured on both of the models, along with four USB 3.1 5 Gbps and two USB 2.0 ports. The rear I/O on the TUF Z370-PLUS Gaming includes a single USB 3.1 5 Gbps Type-C port, in exchange for two of the Type-A ports. Both boards have additional USB real estate via two USB 3.1 5 Gbps headers and two USB 2.0 headers. Both of the budget gaming targeted models omit DisplayPort in favor of a single DVI-D port, but HDMI is also present on both boards. Rounding off the rear I/O of both boards are a set of Realtek ALC887 controlled 3.5mm audio jacks and a single digital S/PDIF output, as well as the network port and combo PS/2 ports.

Dotted around the boards are fan headers, with the Pro Gaming having four headers total with a single AIO CPU cooling header, while the Plus Gaming only has three but one of them is a dedicated water cooling pump header.