The ASUS Prime Z370-A has some of ASUS' classic mainstream look without offering some of the exotic PCB stylings that other products have. The Prime boards are typically a driving platform for the subtle inclusion of customizable RGB lighting, starting with the top right-hand side of the motherboard area with additional RGB headers, but users looking for something black and white (literally) can turn this off via the BIOS or the ASUS AURA SYNC software utility. 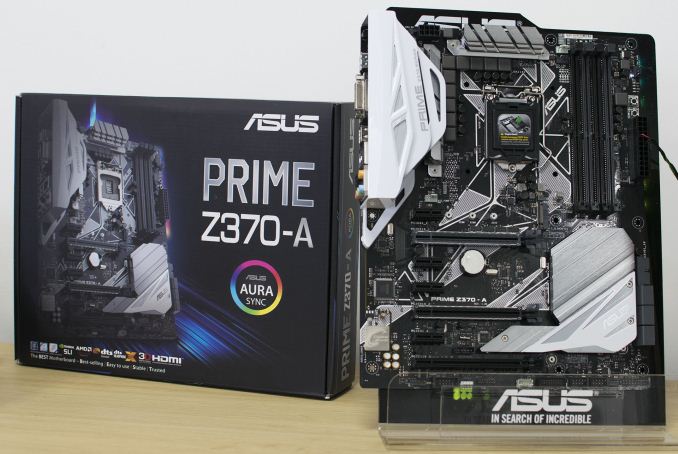 The Prime Z370-A uses three full-length PCIe 3.0 x16 slots, with the top two having SafeSlot reinforcement and run at x16 or x8/x8 with two GPUs. The final bottom full-length slot, as well as the four PCIe 3.0 x1 slots, take their lanes directly from the chipset. Both SLI and Crossfire configurations are supported. The board supports two memory modules per channel, with an on-box rated speed up to DDR4-4000 (depending on the performance of the memory controller on the processor). ASUS likes to promote its T-Topology technology for their high-speed memory support.

The black PCB features plenty of triangle shaped white imprints on the PCB (which I believe detracts from the cleanness of the build), but the Prime Z370-A does drop most of the gaming-related specifics such as SupremeFX audio that the Strix and Maximus X boards use. The audio is the same Realtek ALC1220 codec, except this time the Crystal Sound 3 branding is present.

On the rear IO panel we find a pair of USB 3.1 10Gbps ports (one Type-A and one Type-C) with a further two Type-A USB 3.1 5Gbps and two USB 2.0 ports on the back. The front panel headers on this board allow for an additional four USB 3.1 5Gbps ports and four USB 2.0 ports in total. The Prime Z370-A is another adopter of the Intel I219-V gigabit Ethernet controller and Realtek ALC1220 codec, with an EMI shielded codec using gold Nichon audio capacitors. For the rear IO this means 3.5mm audio jacks and a single S/PDIF output. Video outputs come from a DisplayPort, HDMI and DVI-D port.

For storage, the chipset heatsink hides one of the M.2 slots underneath which also aids in high-performance storage cooling. The top M.2 slot is placed alongside the top PCIe x1, and just above the most northerly placed full-length PCIe 3.0 x16 slot. The Prime Z370-A has a total of six SATA ports as well. 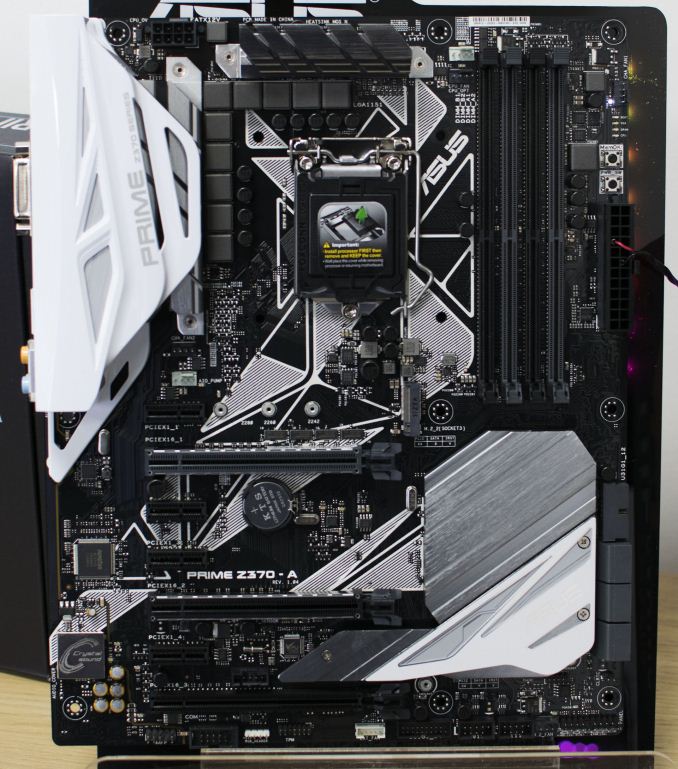 The Prime Z370-A offers ones of the most loaded cooling option header clusters from any ASUS boards in the sub $200 price point. On top of the AIO and thermal sensor headers, there are five 4-pin PWM headers.

The focus on the Prime Z370-A is for consumers that want a clean and clear board with the option of subtle RGB lighting thanks to a single RGB strip header, or a simple white and black contrasting theme is possible. It keeps a lot of the top features and components of the Strix range, but with a lower emphasis on gaming and more focus on traditional use.