The ASRock Z590 Pro 4 is another entry-level series for users, specifically focusing on basic features and aesthetics. For those that don't care too much for gaming-specific features, the Z590 Pro 4 still has plenty going for it. It uses a black and silver printed PCB, with a pair of silver heatsinks cooling an advertised 14-phase power delivery, and an RGB enabled chipset heatsink. 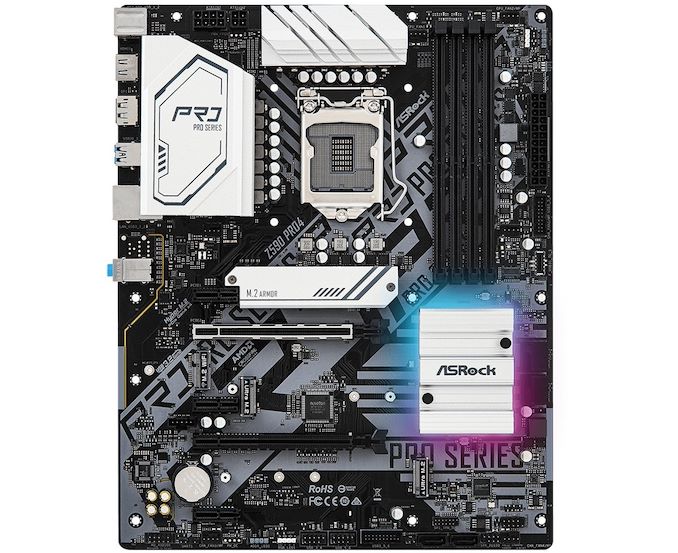 The feature set is a pair of full-length PCIe slots, with the top slot operating at PCIe 4.0 x16 and the second slot electronically locked to PCIe 3.0 x4, with three additional PCIe 3.0 x1 slots. Memory support includes DDR4-4800, with a maximum capacity of up to 128 GB across four available memory slots. There are three M.2 slots in total for storage, including one PCIe 4.0 x4 M.2 and two PCIe 3.0 x4/SATA M.2 slots, with six SATA ports for more conventional SATA based drives. The SATA slots are split up into two sections, with four right-angled ports and two straight angled ports, with all of them including support for RAID 0, 1, 5, and 10 arrays.

The ASRock Z590 Pro4 omits any Wi-Fi connectivity, but it does include an unspecified 2.5 GbE controller powering one RJ45 port. It also lacks Type-C connectivity, with just two USB 3.2 G2 Type-A, two USB 3.2 G1 Type-A, and two USB 2.0 ports. It includes a pair of video outputs for integrated graphics, including DisplayPort 1.4 and HDMI, with an older Realtek ALC897 HD audio codec powering three 3.5 mm audio jacks. Finishing off the rear panel is a PS/2 keyboard and mouse combo port.