One of ASRock's more recent ranges comes via the Steel Legend series, represented by the ASRock Z590 Steel Legend Wi-Fi 6E. It marks a much different design from its other Z590 models with an urban camouflaged PCB and silver and white accented heatsinks. It includes an illuminated Steel Legend logo in the rear panel cover and chipset heatsink, with more RGB LEDs, integrated on the right-hand side. ASRock also has a non-Wi-Fi 6E variant, the same board, but without the CNVi. 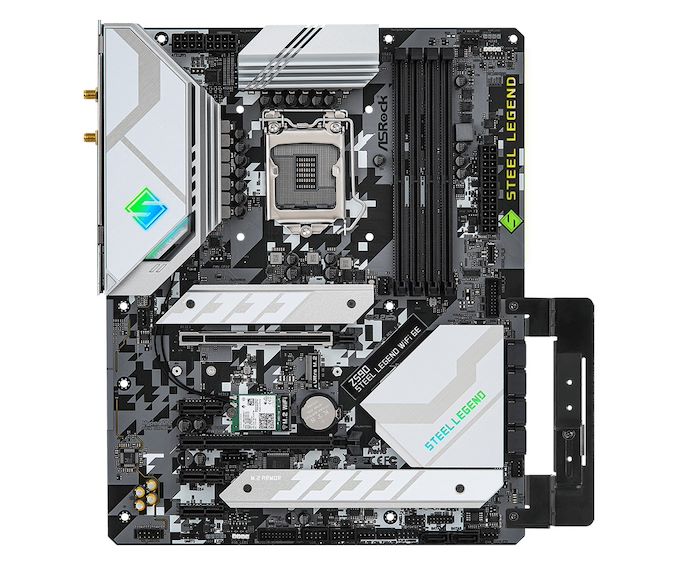 The ASRock Z590 Steel Legend WiFi 6E includes two full-length PCIe slots, including a PCIe 4.0 x16 slot up top, while the second slot is locked down at PCIe 3.0 x4, with three PCIe 3.0 x1 slots. There are four memory slots with support for DDR4-4800 memory and the capability for users to install up to 128 GB. Storage options include three M.2 slots, one operating at PCIe 4.0 x4, and the other two restricted to PCIe 3.0 x4/SATA. ASRock includes six SATA ports with support for RAID 0, 1, 5, and 10 arrays for more conventional storage. ASRock also advertises a large 14-phase power delivery with DR. MOS power stages.

ASRock includes one USB 3.2 G2 Type-C on the rear panel, one USB 3.2 G2 Type-A, two USB 3.2 G1 Type-A, and two USB 2.0 ports. There's a pair of video outputs, including one HDMI and one DisplayPort, with the board's five 3.5 mm audio jacks and S/PDIF optical output driven by an older Realtek ALC897 HD audio codec. The networking array includes one Realtek RTL8125 2.5 GbE controller, with an undisclosed Wi-Fi 6E CNVi providing both wireless and BT 5.2 connectivity. The ASRock Z590 Steel Legend omits the Wi-Fi 6E, but everything else is the same.