The ASRock Z590 Extreme WiFi 6E benefits from an Intel Killer Wi-Fi 6E CNVi and looks a more clean-cut offering design-wise than the Phantom Gaming series. It uses an ATX PCB with an X-shaped cutout to provide better access to some of the SATA ports for improved cable management. It follows a black design throughout, with blue accents on the rear panel cover and chipset heatsinks, with some lighting in the rear panel. There is also a version without Intel's Wi-Fi 6E variant, which will be slightly cheaper. 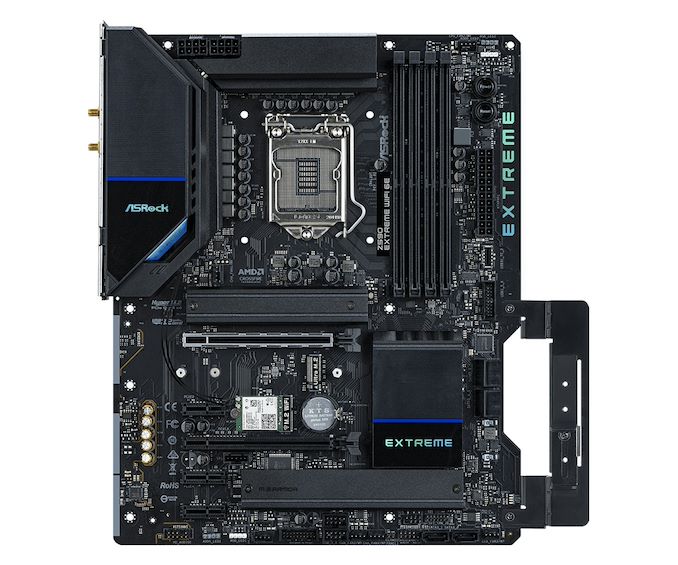 Dominating the lower portion of the board are two full-length PCIe slots, including one PCIe 4.0 x16 slot with ASRock's Steel Slot Armor reinforcement, while the second operates at PCIe 3.0 x4. There is also three PCIe 3.0 x1 slots. The board includes three M.2 slots, with the top one supporting PCIe 4.0 x4 and the other two supporting PCIe 3.0 x4/SATA drives. A cut-out provides better access to four SATA ports, with two straight-angled ports for a combined total of six, including support for RAID 0, 1, 5, and 10 arrays. ASRock is also advertising the Z590 Extreme WiFi 6E to include a 14-phase power delivery.

In terms of connectivity, the ASRock Z590 Extreme WiFi 6E includes one USB 3.2 G2 Type-C, one USB 3.2 G2 Type-A, two USB 3.2 G1 Type-A, and two USB 2.0 ports. It uses dual RJ45 ports with a Realtek RTL8125 2.5 GbE and undisclosed Intel Gigabit controller pairing. It uses an undisclosed Wi-Fi 6E interface for wireless connectivity with support for BT 5.2 devices on the Wi-Fi enabled version, while the regular Z590 Extreme omits this. The onboard audio includes five 3.5 mm jacks and S/PDIF optical output powered by a Realtek ALC1220 HD audio codec. Finishing off the rear panel is a pair of video outputs, including a DisplayPort and HDMI, with a PS/2 combo keyboard and mouse port.