A mainstay from the MPG performance gaming series, the MSI MPG Z590 Gaming Carbon WiFi is using a carbon fiber inspired design throughout. Opting for a more aggressive and futuristic look compared to its Z490 Gaming Carbon WiFi model. From the black PCB to the black and slightly dark grey heatsinks throughout its design, MSI looks to stamp a new style to its motherboard range. Notably, the heatsink fan array on the power delivery heatsink is very striking, with an RGB-enabled rear panel cover, and more RGB LEDs integrated into the chipset heatsink. 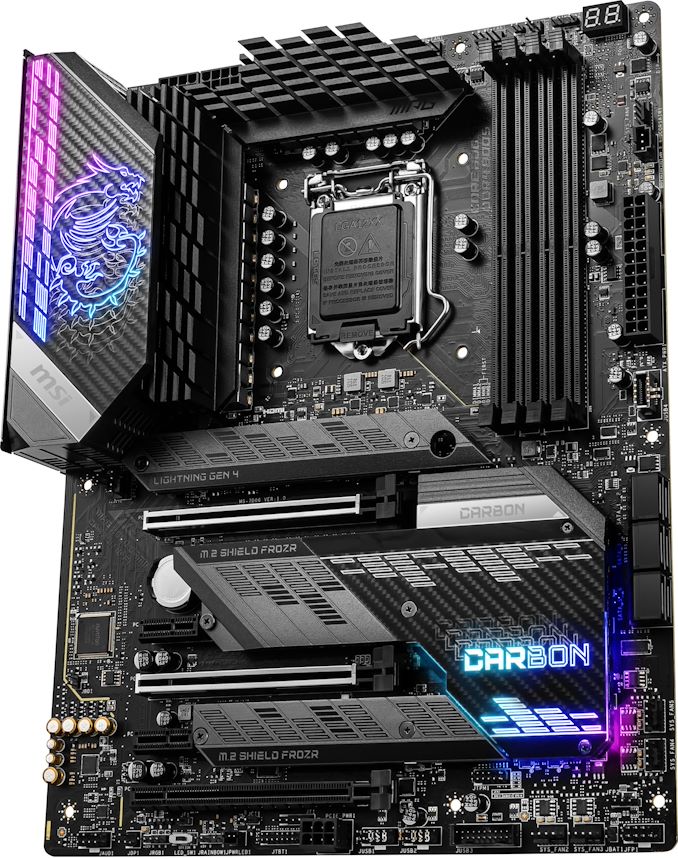 The MSI MPG Z590 Gaming Carbon WiFi doesn't just look fresh, but it has some very impressive features. This includes three full-length PCIe slots, with two operating at PCIe 4.0 x16 and x8/x8, with the other operating at PCIe 3.0 x4. There is also one PCIe 3.0 x1 slot, with a trio of M.2 slot heatsinks flanking the PCIe slot area. MSI includes one PCIe 4.0 x4 M.2 slot, with two PCIe 3.0 x4/SATA slots, with six SATA ports offering support for RAID 0, 1, 5, and 10 arrays. There is also support for up to DDR4-5200 memory, with a total combined capacity of up to 128 GB available across four memory slots.

Representing the mid-range, the MSI MPG Z590 Gaming Carbon WiFi has an MSRP of $324. The MPG series is catered towards the mid-range of the Z590 market, and it has plenty of features to make it a solid option, including USB 3.2 G2x2 Type-C, 2.5 GbE, and Wi-Fi 6E.