A new addition to its MPG series, MSI has unveiled the MPG Z590 Gaming Force. As aggressive in nature, as it sounds, it is using a very unorthodox color scheme with metallic purple and gold heatsinks on a black PCB. Resembling something out of Gundam, MSI is advertising a premium 16-phase power delivery for the CPU, with a pair of 8-pin 12 V ATX CPU power inputs, with a two-digit LED debugger located in the top-right corner. 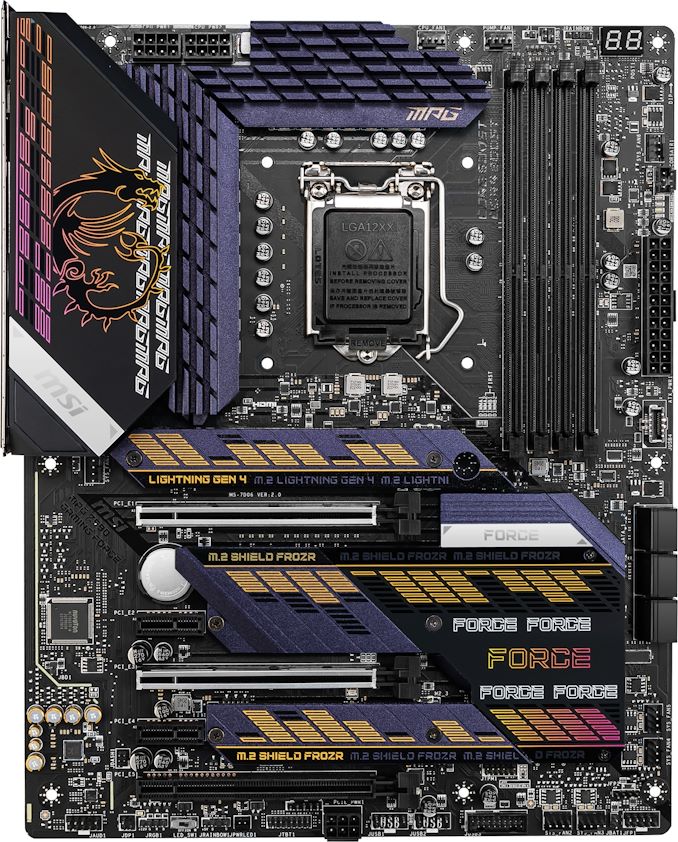 The MSI MPG Z590 Gaming Force uses three full-length PCIe slots, with the top two operating at PCIe 4.0 x16 and x8/x8, and the third one operating at PCIe 3.0 x4, with two additional PCIe 3.0 x1 slots. Looking at storage options, it includes one PCIe 4.0 x4 M.2 slot, with two PCIe 3.0 x4/SATA M.2 slots, each of them covered by its own fancy purple and yellow accented heatsink. The board also includes six SATA ports with support for RAID 0, 1, 5, and 10. Located along the bottom of the PCB is a 6-pin 12 V GPU power input, which is designed to provide more power to the PCIe slots, although this is a very niche inclusion and is not entirely necessary.

On the rear panel is one USB 3.2 G2x2 Type-C, three USB 3.2 G2 Type-A, two USB 3.2 G1 Type-A, and four USB 2.0 ports. For networking, it includes an Intel I225-V 2.5 GbE controller. The onboard audio configuration consists of five 3.5 mm audio jacks and S/PDIF optical output, which is powered by an unspecified Realtek HD audio codec. A small BIOS Flashback button is located on the left-hand side, while users looking to utilize Intel HD graphics can the DisplayPort 1.4 and HDMI 2.0 video output pairing.

The MPG Z590 Gaming Force is a new MSI model and looks to be inspired by the legendary Gundam with its purple and gold color scheme. It has a solid mid-range controller set, with a reasonable MSRP price of $314.