One of MSI's premium ranges is the Unify, with subtle and classic all-black aesthetics that omit integrated RGB lighting. The smallest of its trio of Unify boards is the MSI MEG Z590I Unify with its mini-ITX form factor, with plenty of premium features, including a 10-layer PCB. It uses all-black heatsinks, with a black dragon embossed onto the rear panel cover, and has a combination M.2 and chipset heatsink. 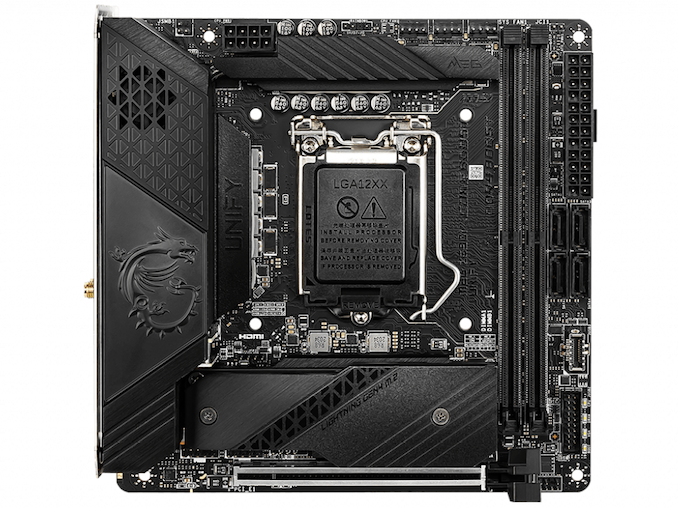 Due to its mini-ITX form factor, the board has a single full-length PCIe 4.0 x16 slot, but it is also equipped with two M.2 slots, one operating at PCIe 4.0 x4 and another with support for PCIe 3.0 x4 and SATA drives. Along the right-hand side is four straight-angled SATA ports, which sit next to two memory slots with support for up to DDR4-5600 memory and up to 64 GB of capacity. MSI is advertising a direct 8+1 phase power delivery, with premium 90 A power stages throughout, with a single 8-pin 12 V ATX CPU power input delivering power to the CPU.

On the rear panel, the MSI MEG Z590I Unify includes two Thunderbolt 4 Type-C ports with two mini-DisplayPort video inputs, two USB 3.2 G2 Type-A, two USB 3.2 G1 Type-A, and two USB 2.0 ports. Powering the networking side is an Intel I225-V 2.5 GbE controller and Intel AX210 Wi-Fi 6E CNVi, while the three 3.5 mm audio jacks are driven by a Realtek ALC1220P HD audio codec. Finishing off the rear panel is a clear CMOS button and a pair of video outputs, including one HDMI 2.0b and one DisplayPort 1.4. output.