The next model down from the Aorus Xtreme is the GIGABYTE Z590 Aorus Master. It is an ATX board with a premium feature set including Aquantia 10 GbE, Wi-Fi 6E, and three PCIe M.2 slots. The design is similar to the previous Z490 version, with black and gray heatsinks covering most of the board's PCB. It features integrated RGB into the etchings on the rear panel cover that resembles claw marks, with an RGB enabled Aorus Falcon logo on the chipset heatsink. 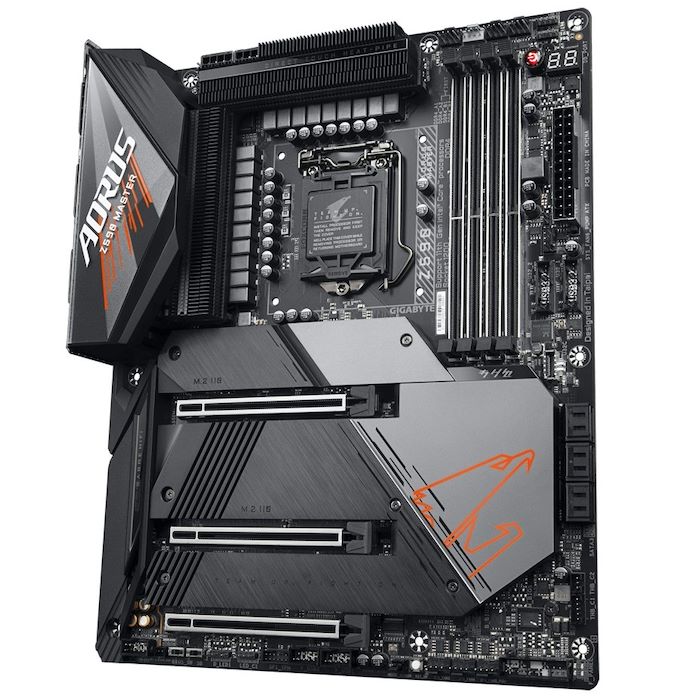 Towards the board's center are three full-length PCIe slots, with two operating at PCIe 4.0 x16 and x8/x8, with the last one locked to PCIe 3.0 x4. GIGABYTE includes plenty of storage options, including three M.2 slots, one supporting PCIe 4.0 x4, with the other two limited to PCIe 3.0 x4 and SATA drives. Six SATA ports allow for RAID 0, 1, 5, and 10 arrays. GIGABYTE is currently supporting DDR4-5000, while users can install up to 128 GB across four available memory slots.

On the rear panel, GIGABYTE includes one USB 3.2 G2x2 Type-C, five USB 3.2 G2 Type-A, and four USB 3.2 G1 Type-A ports. A single Ethernet port is powered by an Aquantia 10 GbE controller with an Intel AX210 Wi-Fi 6E CNVi. Simultaneously, the five 3.5 mm audio jacks and S/PDIF optical output are driven by a Realtek ALC1220-VB HD audio codec and ESS Sabre ES9118 DAC. There is a pair of buttons, one for Q-Flash Plus and another for clearing the CMOS, while a single DisplayPort 1.2 video output offers users access to Intel's HD integrated graphics.