GIGABYTE's flagship for Z590 is the Aorus Xtreme, with an Xtreme WaterForce model for users with custom water cooling. GIGABYTE has gone for a darker look for Z590 when compared to the Z490 Aorus Xtreme, with an all-black aesthetic that looks clean and stylish. The Z590 Aorus Xtreme WaterForce uses a large custom monoblock, which provides cooling to the CPU and the board's large 20+1 phase power delivery. The general design includes RGB LED lighting, which is installed into the rear panel cover and chipset heatsink. 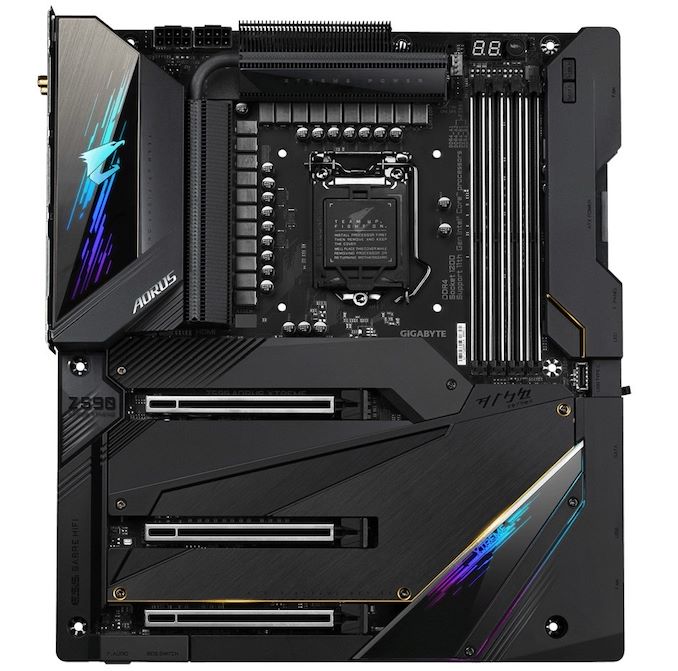 At the top right-hand corner is a two-digit LED debugger, with a power and reset button embedded within a panel covering a right-angled 24-pin 12 V ATX power input. Covering the rest of the PCB is a plethora of black PCIe armor, which blends the M.2 heatsinks into the design. Coated with armor reinforcement, the Z590 Aorus Xtreme includes three full-length slots with two PCIe 4.0 that can operate at x16 or x8/x8, with a third slot electronically locked down to PCIe 3.0 x4. GIGABYTE includes four memory slots capable of supporting up to DDR4-5000, with a total capacity of up to 128 GB across four memory slots. For storage, GIGABYTE includes three M.2 slots, with one operating at PCIe 4.0 x4, two at PCIe 3.0 x4, with six SATA ports offering support for RAID 0, 1, 5, and 10 arrays.

On the rear panel of both the Z590 Aorus Xtreme and Xtreme WaterForce is dual Thunderbolt 4 Type-C, with eight USB 3.2 G2 Type-A ports and one HDMI video output. A Realtek ALC1220-VB HD audio codec and ESS Sabre ES9018K2M DAC power the five 3.5 mm audio jacks and S/PDIF optical output, while at the left-hand side, GIGABYTE has included a Clear CMOS and Q-Flash Plus button. Finishing off the rear panel is a pair of Ethernet ports, one through an Aquantia 10 GbE controller and the other by an Intel I225-V 2.5 GbE controller, with antenna ports for Intel's AX210 Wi-Fi 6E CNVi.