Another from its new Biostar's Valkyrie series is a premium mini-ITX model. The Biostar Z590I Valkyrie follows a similar design to its larger ATX-sized counterpart with gold and pink accents on black heatsinks. The Z590I Valkyrie includes support for DDR4-5000 memory, 2.5 GbE networking, as well as dual M.2 slots, and four SATA ports. 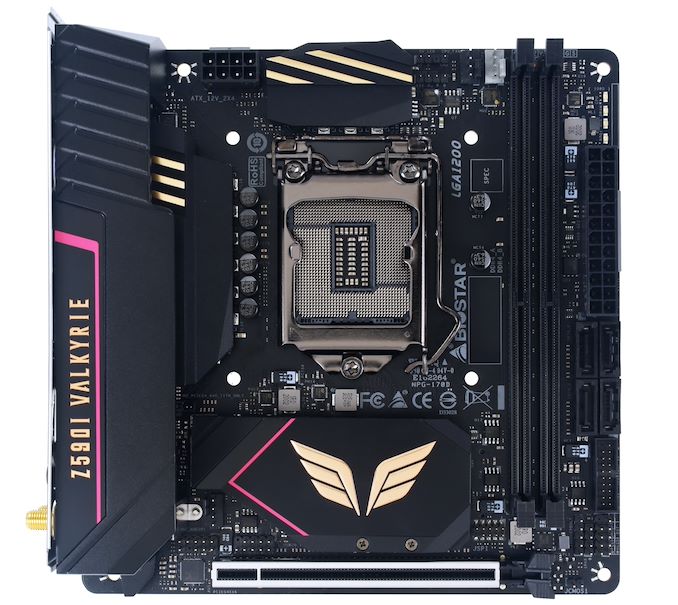 Located along the bottom of the Z590 Valkyrie is a single full-length PCIe 4.0 x16 slot, with two M.2 slots, one operating at PCIe 4.0 x4 and a second PCIe 3.0 x4/SATA slot. The Valkyrie has four SATA ports with support for RAID 0, 1, 5, and 10 arrays. When using a SATA based drive in the second M.2 slot, it does share bandwidth with the SATA slots. Biostar also includes a Key-E M.2 slot, which is populated with an Intel CNVi wireless interface, although there is no telling which CNVi it is based on the specifications we have. The board includes two memory slots that can hold up to 64 GB, with supported speeds up to DDR4-5000.

On the rear panel, the Biostar Z590I Valkyrie includes one USB 3.2 G2x2 Type-C, two USB 3.2 G2 Type-A, three USB 3.2 G1 Type-A, and two USB 2.0 ports. To the far-left hand side are a DisplayPort and HDMI 2.0 video output pairing, with a PS/2 combo keyboard and mouse port. For networking, there's a single Ethernet port driven by a Realtek RTL8125B 2.5 Gb controller, with two unspecified Wi-Fi antenna ports at the right. Finishing off the rear panel is three 3.5 mm audio jacks powered by a Realtek ALC1220 HD audio codec, while it also includes a pre-attached I/O shield.

At the time of writing, Biostar hasn't given us any indication on pricing.