Typically one of the most affordable brands in motherboards is Biostar, with its Racing inspired designs and mid-range controller sets at a competitive price point. For Intel's Z590 chipset launch, Biostar has prepared a premium model, the Z590 Valkyrie. Deriving from the Old Norse language for 'chooser of the slain,' the Z590 Valkyrie includes visually appealing pink and gold accents across the PCIe slot armor, chipset heatsink, and rear panel cover, which also includes integrated LED lighting. 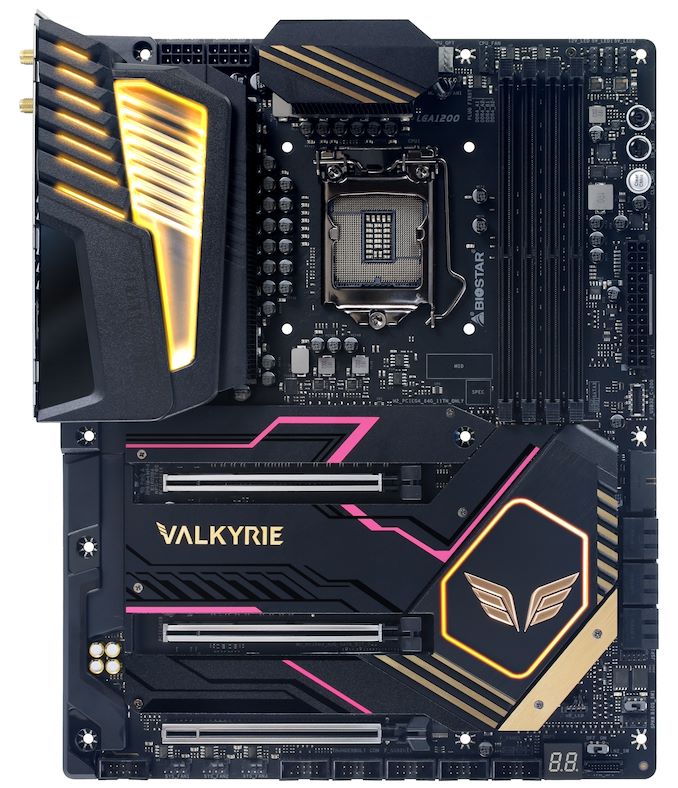 Surrounded by a black, pink, and gold accented set of M.2 heatsinks and armor are three full-length PCIe slots, with two operating at PCIe 4.0 x16 and x8/x8, with a PCIe 3.0 x4 slot along the bottom. Touching more on the storage capabilities of the Z590 Valkyrie, it includes three PCIe M.2 slots, with the top slot operating at PCIe 4.0 x4, with the other two slots supporting both PCIe 3.0 x4 and SATA drives, but using SATA drives in the M.2 slot will make some of the SATA ports unavailable as they share bandwidth. Six SATA ports include support for RAID 0, 1, 5, and 10 arrays.

Biostar also includes support for up to DDR4-5000 memory, with a total capacity of up to 128 GB across four memory slots. To provide power to the CPU, Biostar is using a pair of 8-pin 12 V ATX CPU power inputs, with a handy two-digit LED debugger located in the bottom left-hand corner.

On the rear panel is a variety of input and output, with one USB 3.2 G2x2 Type-C, five USB 3.2 G2 Type-A, and two USB 3.2 G1 Type-A ports. There's a pair of video outputs, including DisplayPort 1.4 and HDMI 2.0, with five 3.5 mm audio jacks and S/PDIF optical output powered by a Realtek ALC1220 HD audio codec. Networking on the Z590 Valkyrie consists of a Realtek RTL8125B 2.5 GbE and an unspecific Wi-Fi interface. Finishing off the rear panel is a PS/2 keyboard and mouse combo port, with a preattached rear I/O shield.

Biostar hasn't provided us any information on pricing at the time of writing.