The last of the trio of motherboards from Biostar is the Racing Z590GTA. Based on its competitive racing themed series, Biostar has opted for a premium controller set on the ATX Z590GTA, with features including support for DDR4-5000 memory, a Realtek 2.5 GbE controller, and three PCIe M.2 slots. 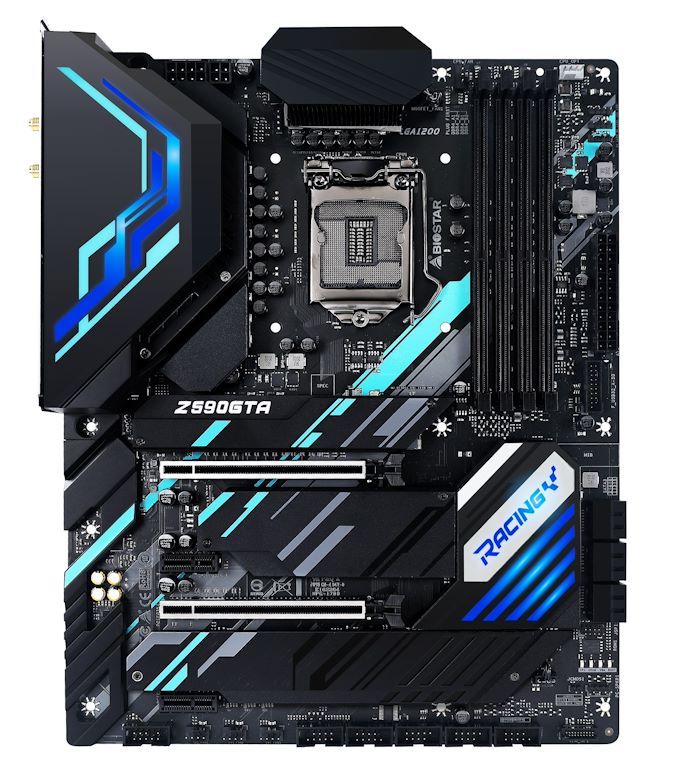 Adopting a modern and interesting aesthetic, the Biostar Racing Z590GTA has diagonally imprinted blue and gray accents across the rear panel cover and M.2 heatsinks. The rear panel and chipset heatsink looks like it includes integrated RGB LEDs. For storage, the Biostar Racing Z590GTA uses a trio of M.2 slots, including one PCIe 4.0 x4 and two PCIe 3.0 x4/SATA slots. When using SATA drives in the supported M.2 slots, these will share bandwidth with the SATA ports, with six in total that can accommodate RAID 0, 1, 5, and 10 arrays.

Providing power to the CPU is an 8-pin and 4-pin 12 V ATX CPU power input pairing, with a 24-pin 12 V ATX motherboard power input on the right-hand side. Above this is four memory slots capable of DDR4-5000 memory, with a maximum supported capacity of up to 128 GB. Towards the board's center is a full-length PCIe 4.0 x16 slot, with a second full-length PCIe 3.0 x4 slot and two PCIe 3.0 x1 slots.

Biostar hasn't shared any information on pricing at the time of writing.