The ASUS ROG Strix Z590-A Gaming WIFI is a four-letter distinguished Strix Z590 model, with a very subtle silver and white aesthetic on a black PCB. Some of the A's primary features include support for up to DDR4-5333 memory, three PCIe M.2 slots, six SATA ports, and an Intel 2.5 Gb Ethernet controller. Design-wise, the board uses silver, and white heatsinks, with ASUS Strix branding on the chipset heatsink and an RGB-enabled ROG logo on the rear panel cover. 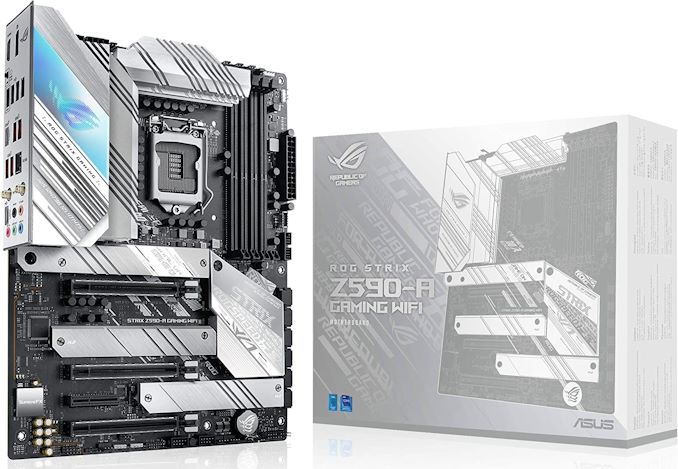 On the rear panel are a single USB 3.2 G2x2 Type-C, four USB 3.2 G2 Type-A, and five USB 2.0 ports. Included for users planning on using Intel's UHD integrated graphics are a DisplayPort and HDMI video output combination, with a single RJ45 port powered by an Intel I225-V 2.5 GbE controller. The five 3.5 mm audio jacks are powered by a ROG SupremeFX ALC4080 HD audio codec, with a USB Type-C audio port which is quite rare. ASUS doesn't specify which Wi-Fi 6 interface it is using, but it's likely an Intel AX200 or AX201. Finishing off the rear panel is a small BIOS Flashback button.