The ASUS ROG Strix F series is typically one of its most well-positioned models when factoring in both price and performance. It is a competitive alternative to the slightly higher-end Strix Z590-E Gaming WIFI, with plenty of features, including four M.2 slots, 2.5 GbE, and the latest Realtek HD audio codec. Its design follows a primarily black color scheme, with silver accents on the rear panel cover, including an RGB enabled Republic of Gamers logo. ASUS is advertising a 14+2 phase power delivery, with an 8-pin and 4-pin 12 V ATX power input pairing. 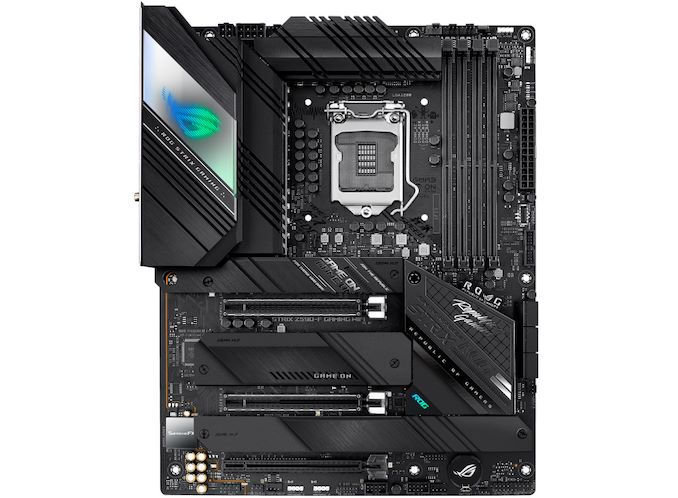 Looking at expansion support, ASUS includes three full-length PCIe slots, including two full-length slots operating at PCIe 4.0 x16 and x8/x8, while the third full-length slot is electronically locked to PCIe 3.0 x4. For storage, ASUS includes four PCIe M.2 slots, including two operating at PCIe 4.0 x4, with one supporting PCIe 3.0 x4 and another at PCIe 3.0 x4/SATA. There are six SATA ports, with support for RAID 0, 1, 5, and 10 arrays. The ASUS ROG Strix Z590-F Gaming Wi-Fi also has four memory slots, with supported speeds of up to DDR4-5333 and a maximum capacity of up to 128 GB.