Starting off with our SPEC2006 analysis for Tiger Lake, given that we’re extremely familiar with the microarchitectural characteristics of these workloads: 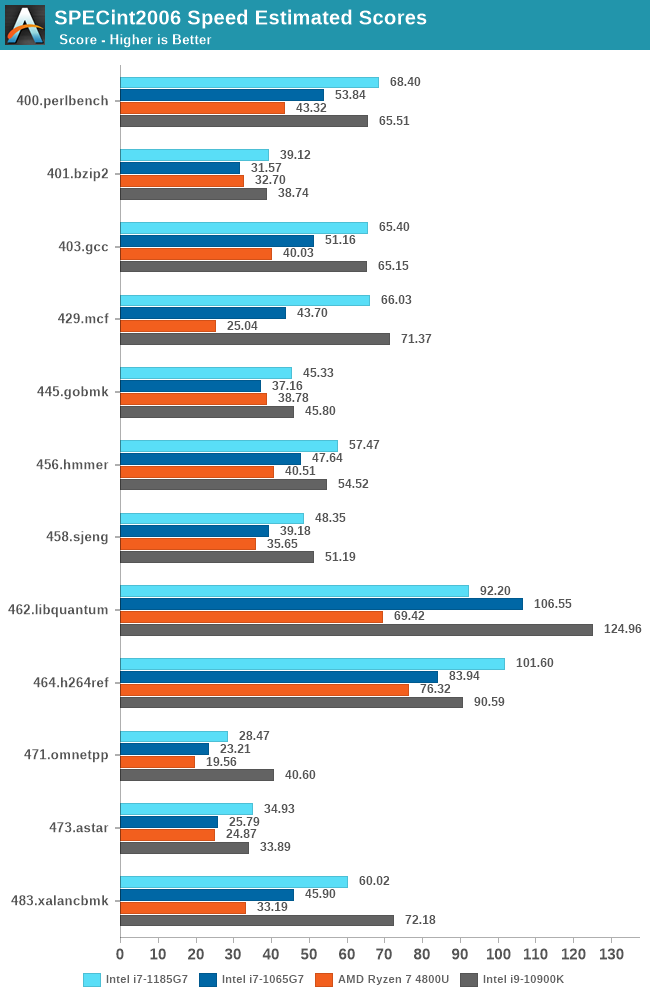 As a note, the Tiger Lake figures published in the detailed sub-scores represent the 28W TDP configuration option of the platform, with the core mostly clocking to 4800MHz and all other aspects the device allowing for maximum speed. This allows us for a pure microarchitectural analysis.

The generational improvements of the new Sunny Cove design here is showing very much its advertised characteristics of the microarchitecture.

Starting off with high-IPC and backend execution-bound workloads such as 456.hmmer we’re seeing a near linear performance increase with clock frequency. Sunny Cove here had larger IPC improvements but the Ice Lake design was rather limited in its clock frequency, most of the time still losing out to higher-clocked Skylake designs.

This time around with the major frequency boost, the Tiger Lake chip is able to even outperform the desktop i7-10900K at 5.3GHz as long as memory doesn’t become a bottleneck.

IPC/performance-per-clock wise, things are mostly flat between generation at +-2% depending on workloads, but 473.astar does seem to like the Willow Cove architecture as we’re seeing a +10% boost. 403.gcc’s 4% IPC improvement also likely takes advantage of the larger L2 cache of the design, whilst 429.mcf’s very latency sensitive nature sees a huge 23% IPC boost thanks to the strong memory controllers of Tiger Lake.

462.libquantum doesn’t fare well at all as we’re not only seeing a 30% reduction in IPC, but absolute performance is actually outright worse than Ice Lake. This workload is bandwidth hungry. The theory is that if it has a mostly cache-resident workload footprint, then it would generally make sense to see such a perf degradation due to the L3’s overall degraded generational performance. It’s an interesting aspect we’ll also see in 470.lbm. 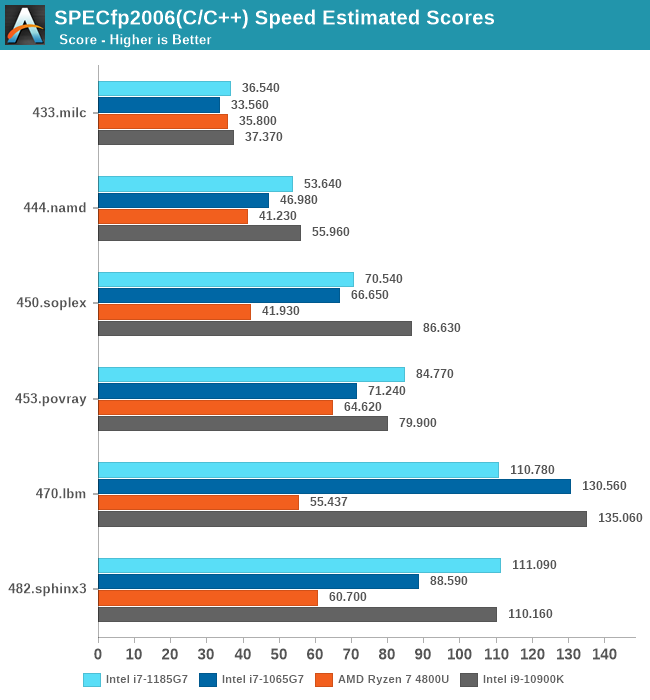 In the floating-point workloads, we again see the Tiger Lake chip doing extremely well, but there are some outliers. As mentioned 470.lbm is which is also extremely bandwidth hungry sees a generational degradation, which again could be L3 related, or something more specific to the memory subsystem.

There’s actually a wider IPC degradation in this set, with 482.sphinx being the only positive workload with a +2% boost, while the rest fall in a -12%, -7%, -14%, -3% and that massive -31% degradation for 470.lbm. Essentially, all workload which have stronger memory pressure characteristics. 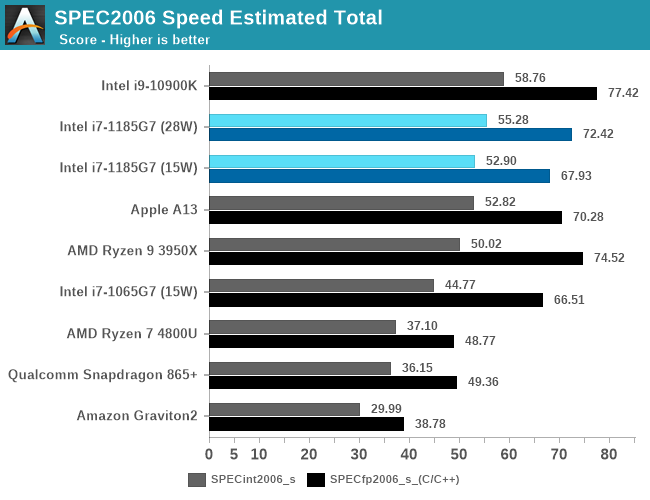 Overall SPEC2006 score performance for Tiger Lake is extremely good. Here we also present the 15W vs 28W configuration figures for the single-threaded workloads, which do see a jump in performance by going to the higher TDP configuration, meaning the design is thermally constrained at 15W even in ST workloads. By the way, this is a core power consumption limitation, as even small memory footprint workloads see a performance jump.

Against the x86 competition, Tiger Lake leaves AMD’s Zen2-based Renoir in the dust when it comes to single-threaded performance. Comparing it against Apple’s A13, things aren’t looking so rosy as the Intel CPU barely outmatches it even though it uses several times more power, which doesn’t bode well for Intel once Apple releases its “Apple Silicon” Macbooks.

Even against Arm’s Cortex-A77 things aren’t looking rosy, as the x86 crowd just all that much ahead considering the Arm design only uses 2W. 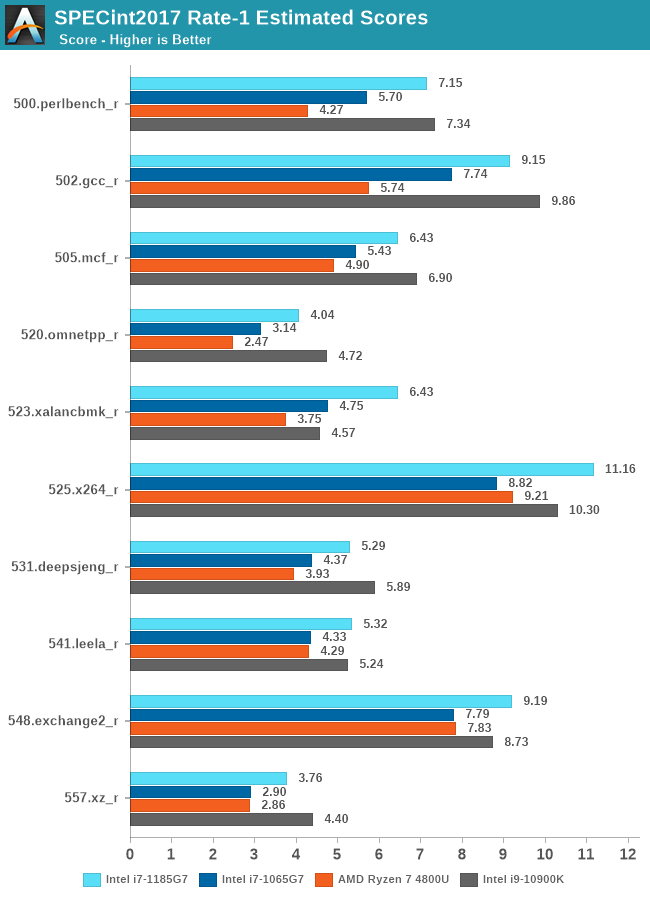 Moving onto the newer SPEC2017 suite, we’re seeing a quite similar story across the scaling between the platforms. Tiger Lake and its Willow Cove cores are showcasing outstanding performance as long as things are execution-bound, however do fall behind a bit to the desktop system when memory comes into play. There are two sets of results here, workloads which have high bandwidth or latency requirements, or those which have large memory footprint requirements.

523.xalancbmk_r seems to be of the latter as it’s posting a quite nice 10% IPC jump for Willow Cove while the rest generally in-between -4% regressions or +3-5% improvements. 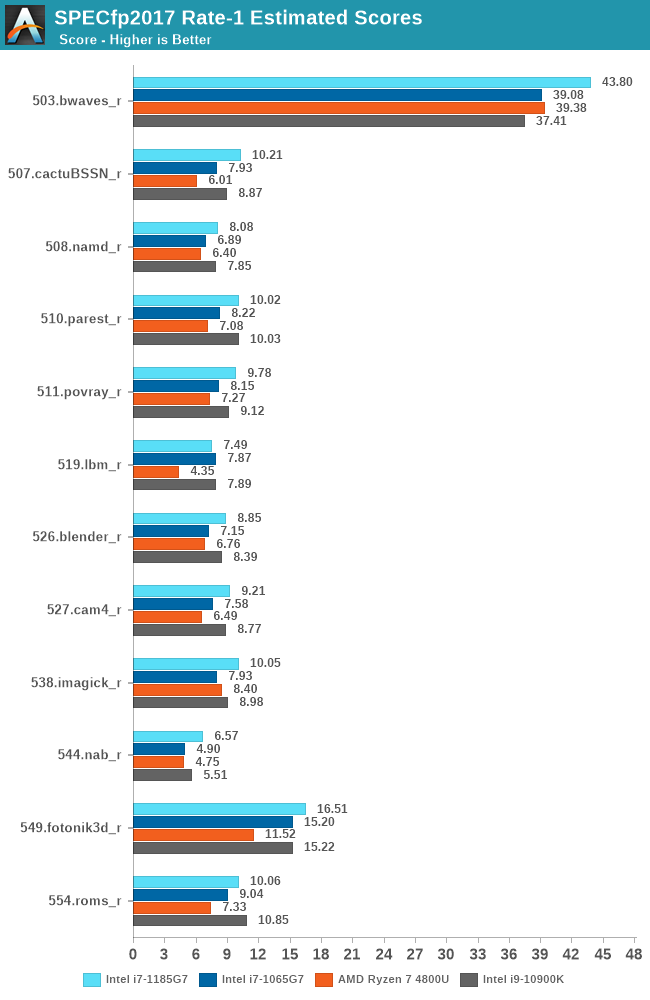 In the FP suite, we mostly see again the same kind of characteristics, with performance most of the time scaling in line with the clock frequency of Tiger Lake, with a few outliers here and there in terms of IPC, such as 544.nab_r gaining +9%, or 549.fotonik3d_r regressing by 12%.

Much like in the 2006 suite, the memory bandwidth hungry 519.lbm_r sees a 23% IPC regression, also regressing its absolute performance below that of Ice Lake. 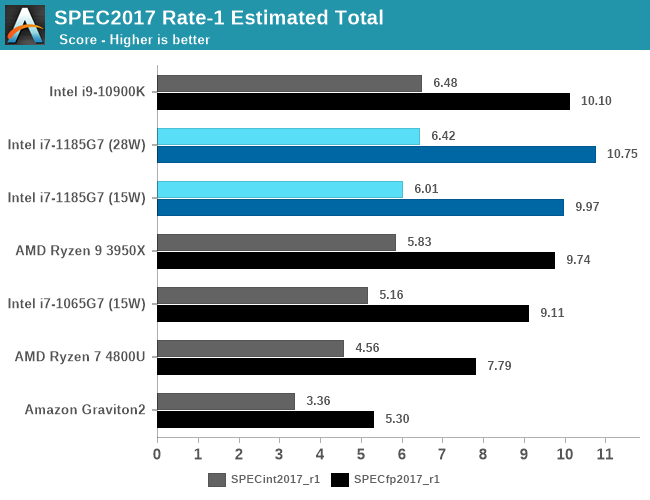 Overall, in the 2017 scores, Tiger Lake actually comes in as the leading CPU microarchitecture if you account both the integer and float-point scores together.

Although the design’s absolute performance here is exemplary, I feel a bit disappointed that in general the majority of the performance gains seen today were due to the higher clock frequencies of the new design.

IPC improvements of Willow Cove are quite mixed. In some rare workloads which can fully take advantage of the cache increases we’re seeing 9-10% improvements, but these are more of an exception rather than the rule. In other workloads we saw some quite odd performance regressions, especially in tests with high memory pressure where the design saw ~5-12% regressions. As a geometric mean across all the SPEC workloads and normalised for frequency, Tiger Lake showed 97% of the performance per clock of Ice Lake.

In a competitive landscape where AMD is set to make regular +15% generational IPC improvements and Arm now has an aggressive roadmap with yearly +30% IPC upgrades, Intel’s Willow Cove, although it does deliver great performance, seems to be a rather uninspiring microarchitecture.