Despite the hullaballoo with the 28 W numbers on Tiger Lake, we suspect that most OEMs will still be positioning the hardware inside chassis built for the 15 W ultraportable market. This is where most of Intel’s OEMs have had success over the last decade, as the lower cooling requirements allow for a more user-friendly design. At 28 W, there is more of a cross-over into laptops that have discrete graphics options, and the main company that has succeeded in offering 28 W laptops without discrete graphics has been Apple - most Intel partners, if they want discrete graphics, end up looking at the 45 W processors with more cores.

So in that respect, our main battle should occur between the products built for 15 W. To that end we have been able to put the three together that will command this holiday season’s offerings: Ice Lake, Tiger Lake, and AMD’s Renoir.

For our 15 W comparisons, we can look again at the same benchmarks as the previous page. First up is y-Cruncher, an AVX2/AVX512 compute workload that tasks the CPU and the memory by calculating 2.5 billion digits of Pi, and requires ~11 GB of DRAM. 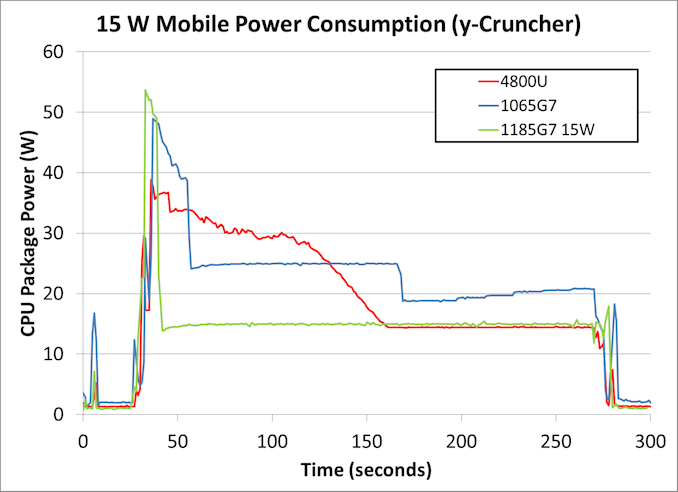 As we saw on the previous page, our Tiger Lake system in green at 15 W turbos up to ~53 watts before very quickly coming down to 15 W for the rest of the test.

The Microsoft Surface Laptop 3, by virtue of an OEM system, has different behavior - it turbos for longer, settles into a short turbo limit of 25 W, and then after about two minutes comes down to 20 W. The system then appears to opportunistically up the power draw until the end of the test, likely due to detecting extra thermal headroom.

The AMD Renoir processor does not turbo as high, peaking at only 38.9 W. Over the course of the next 100 seconds or slow, we see a small ramp down to just under 30 watts, before a more consistent decline over 30 seconds to 15 W, before staying at 15 W for the full test. The Renoir here has eight cores rather that four, but is running AVX2 rather than AVX-512 code.

The results are as follows:

All three systems perform the test in roughly the same amount of time, however the Tiger Lake system is very much ahead for efficiency. Tiger Lake effectively shaves off a third of the power from the previous generation Ice Lake system. We weren’t expecting this much of a jump from Ice Lake to Tiger Lake, but it would appear that Intel has done some work on the AVX-512 unit, and is putting that new high-performance transistor to use.

Moving onto the Agisoft test - as mentioned on the previous page, this is a 2D image to 3D modeling workflow where the algorithm comes in four stages, some of which prefer full multi-thread throughput, while others are more frequency and memory sensitive. 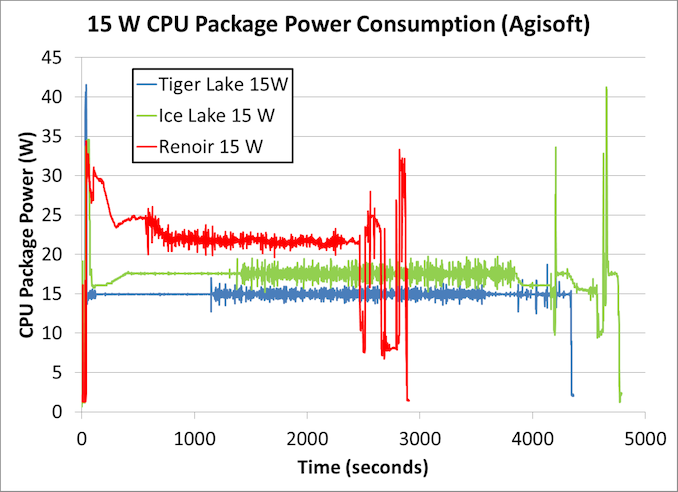 First, the Renoir finishes in almost half the time, mostly due to the fact that it has double the number of cores - there is no AVX-512 codepath in this test, and so all the processors rely on a mix of SSE, AVX, and perhaps some AVX2. That aside, the turbo behavior of Renoir is very interesting - we get almost 10 minutes of higher-than-base performance before the algorithm sets into a routine, hovering around 22 W. Because this test doesn’t attack the vector units as hard as the previous test, it may be a case that the Renoir system can manage the power distribution a bit better between the eight cores, allowing for the higher turbo.

Between the Ice Lake and the Tiger Lake, from the graph it would appear to be a double win for Tiger Lake, finishing in a shorter time but also consuming less power. The results are:

In this case, it’s a win for Renoir - a lot shorter time, and better power to boot, derived from the eight cores built on TSMC 7nm. Tiger Lake still represents a good jump over Ice Lake, offering 10% better performance at only 79% of the power, or a 13% increase in performance efficiency.