On the first page of this review, I covered that our Tiger Lake Reference Design offered three different power modes so that Intel’s customers could get an idea of performance they could expect to see if they built for the different sustained TDP options. The three modes offered to us were:

Intel’s Adaptix is a suite of technologies that includes Dynamic Tuning 2.0, which implements DVFS feedback loops on top of supposedly AI-trained algorithms to help the system deliver power to the parts of the processor that need it most, such as CPU, GPU, interconnect, or accelerators. In reality, what we mostly see is that it reduces frequency in line with memory access stalls, keeping utilization high but reducing power, prolonging turbo modes.

When we put these three modes onto a workload with a mix of heavy AVX-512 compute and memory accesses, the following is observed.

Note that due to time constraints this is the only test we ran with Adaptix enabled. 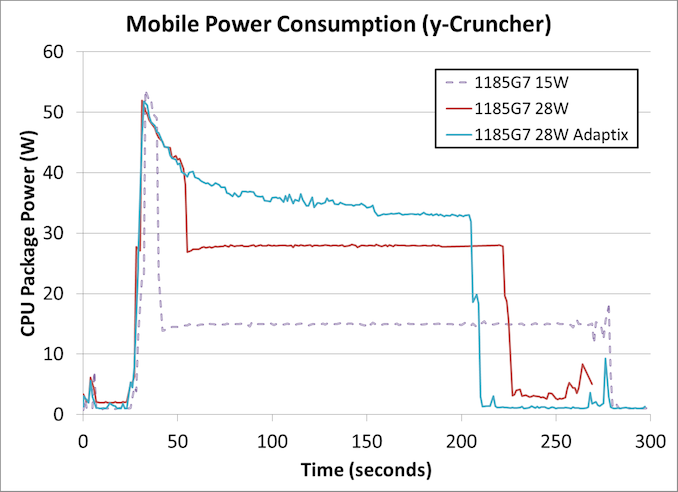 This is a fixed workload to calculate 2.5 billion digits of Pi, which takes around 170-250 seconds, and uses both AVX-512 and 11.2 GB of DRAM to execute. We can already draw conclusions.

In all three power modes, the turbo mode power limit (PL2) is approximately the same at around 52 watts. As the system continues with turbo mode, the power consumed is decreased until the power budget is used up, and the 28 W mode has just over double the power budget of the 15 W mode.

Adaptix clearly works best like this, and although it initially follows the same downward trend as the regular 28 W mode, it levels out without hitting much of a ‘base’ frequency at all. Around about the 150 second mark (120 seconds into the test), there is a big enough drop followed by a flat-line which would probably indicate a thermally-derived sustained power mode, which occurs at 33 watts.

The overall time to complete this test was:

However, this extra speed does come at the cost of total power consumed. With most processors, the peak efficiency point is when the system is at idle, and while these processors do have a good range of high efficiency, when the peak frequencies are requested then we are in a worst case scenario. Because this benchmark measures power over time, we can integrate to get total benchmark power consumed:

This means that for the extra 27% performance, an extra 51% power is used. For Adaptix, that 40% extra performance means 65% more power. This is the trade off with the faster processors, and this is why battery management in mobile systems is so important - if a task is lower priority and can be run in the background, then that is the best way to do it to conserve battery power. This means things like email retrieval, or server synchronization, or thumbnail generation. However, because users demand the start menu to pop up IMMEDIATELY, then user-experience events are always put to the max and then the system goes quickly to idle.

In our second test, we put our power monitoring tools on Agisoft’s Photoscan. This test is somewhat of a compute test, split into four algorithms, however some sections are more scalable than others. Normally in this test we would see some sections rely on single threaded performance, while other sections use AVX2. 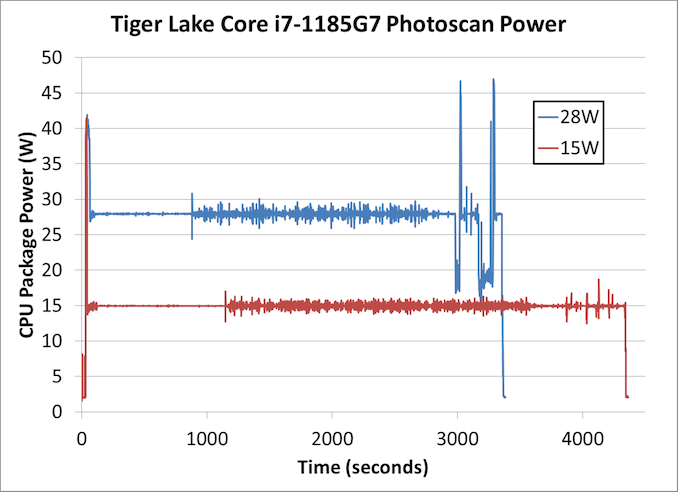 This is a longer test, and so the immediate turbo is less of a leading factor across the whole benchmark. For the first section the system seems content to sit at the respective TDPs, but the second section shows a more variable up and down as power budget is momentarily gained and then used up immediately.

Doing the same maths as before,

For a benchmark that takes about an hour, a +30% performance uplift is quite considerable, however it comes at the expense of +43% power. This is a better ratio than the first compute workload, but still showcases that 28 W is further away from Tiger Lake’s ideal efficiency point.

This leads to the dichotomy of mobile use cases with respect to the marketing that goes on for these products - as part of the Tiger Lake launch, Intel was promoting its use for streaming, professional workflows such as Adobe, video editing and content creation, and AI acceleration. All of these are high-performance workloads, compared to web browsing or basic office work. Partly because Tiger Lake is built on the latest process technology, as well as offering Intel’s best performing CPU and GPU cores, the product is going to be pitched in the premium device market for the professionals and prosumers that can take advantage.