The Intel Lakefield Deep Dive: Everything To Know About the First x86 Hybrid CPU

Performance Numbers: How To Interpret Them

On the previous page, we covered all three of the initial Lakefield designs. All three are very premium products, either offering a super light and thin clamshell with the Samsung, a foldable display with the Lenovo, or dual 9-inch displays in the case of the Microsoft device. Typically we see these sorts of devices paired with the best-in-class performance hardware, which can cost a lot depending on where it is coming from. Add in the device material cost, and we can easily go north of $999, $1499, or even higher when paired with lots of storage, or items like variable refresh displays. Make no mistake, Lakefield will end up in premium high-cost products.

This means that there will be a certain expectation of performance. Users won’t be satisfied if they get an expensive product with mid-range performance – if they’ve paid top dollar, they want it to exceed in all areas. Performance, battery life, and aesthetics all matter to the end-user when we’re dealing with things like flexible displays or new and exciting form factors on top of everything else.

Now don’t get us wrong here, Lakefield certainly fits many of the criterion of a premium product. It was specifically designed to fit into a small footprint by using novel and complex technology. By using the die-to-die bonding techniques and PoP memory, Intel has put in 174 mm2 of silicon into 12mmx12mm dimensions at only 1mm z-height. It leverages both Intel’s leading edge 10+ manufacturing node as well as Intel’s 22FFL high efficiency manufacturing node, and then optimized layout and manufacturing to ensure it has the most appropriate thermal characteristics for the design. There’s also the ultra-low idle power, supposedly measuring 2-3 mW, which has been an important characteristic in laptops that have been using smartphone processors. Offering substantial idle battery life is a key to marketing this type of product.

However, this page is about performance. Ultimately Lakefield can be compared to a number of products on the market. Numbers in brackets indicate big cores and small cores:

One processor I missed out here is the Qualcomm Snapdragon 8cx, which is a 4+4 configuration that Qualcomm has specifically built for these sorts of mobile devices. The 4+4 configuration, on paper, might seem unfair to the 1+4 of Lakefield, whereas the 0+8 configuratrion of the Snapdragon 7c is more in line with what we might expect. However, the Snapdragon 7c isn’t actually inside any retail devices right now, having only been on display at Qualcomm’s own event in December.

The thing is, the Snapdragon 7c is set to be in devices competing at the $500 level against entry-level Intel Celeron devices. The 8cx is the premium chip, that ends up in the premium devices. This is where Intel will have difficulty.

On Intel’s own slides, the company performs two main comparisons.

For the first point, Intel promotes the following against Amber Lake:

For each of these workloads, there’s something very obvious to pick at.

The first one is SPEC2006, not SPEC2017, and it’s comparing an Amber Lake core to a Sunny Cove core, which as we discussed should have +18% IPC. The frequency difference (assuming both were allowed to turbo to max) is 40% in the favor of Amber Lake, however the Lakefield has a 40% TDP advantage.

On the graphics performance, it’s a substantial mashup – Gen 9 vs Gen 11, 24 EUs vs 64 EUs, 1.05 GHz vs 500 MHz, LPDDR3-1866 vs LPDDR4X-4267. We know that Intel is going wide and slow with Lakefield, and the fact that Lakefield has an additional 40% TDP to help the graphics and CPU cores, I suspect that each chip was battling to find the right balance of power to the CPU or power to the GPU.

On the AI workload, this benchmark has been hand-picked. Intel has done an offline Resnet-50, and run the CPUs in batches. With the GPU being wide and slow, there is the question as to whether the GPU would be competitive in batch-1 type scenarios. Again, there’s also a TDP difference here, as well as a memory difference that explains the raw performance change.

Benchmarks Against Lakefield in 1+4 Mode against 0+4 Mode

For the second set of benchmarks, Intel promotes +33% higher web performance and 17% better power efficiency by adding a big core to a quartet of small cores – essentially comparing a full fat Lakefield against a quad-core Atom design.

What this means is that Lakefield, by and large, will perform the same as a quad-core Atom in almost all tasks, especially heavy tasks. Given that we haven’t had a new Atom platform since 2017, and it’s been even longer since we saw Atom notebooks in a big way, I can guarantee that a lot of users will look at Lakefield and compare it to big-core designs. Intel has also tripped over its own feet in not comparing the performance to any of Qualcomm’s designs. The cost would seem to put it square against the Snapdragon 8cx, however the core layout suggests the 7c would be a fairer fight. Putting Intel’s AI test against Qualcomm’s hardware would also make for an interesting comparison.

Another thing to note, which Intel glossed over, that most people are going to be really concerned about.

What The Big Core Is Actually For

I’ve mentioned a few times in this piece that the big Sunny Cove core is more for end-user latency driven interactions, such as tapping on the screen, typing on the keyboard. When it comes to loading a web page, this blurs the line between response and workload, depending on the browser and how it manages threads.

Now, if we take a traditional high load single threaded workload, such as say, rendering. Which core will it run on? A lot of Intel’s marketing materials, as well as considering the layout of the chip, might get a reasonable end-user to expect that it would run on the high-performance single core. However, consider two things: firstly, rendering a frame is not a latency-driven interaction. Secondly, how many processes are running in the background? Both of these elements would point to the operating system pushing the workload, despite being single threaded, onto the Tremont Atom cores.

At the time of writing, Notebookcheck is the only outlet to publish data from an early look on Samsung’s Galaxy Book S. If we take a single threaded rendering workload, like Cinebench R15, then Lakefield scores 88 points, while the Amber Lake that Intel used in its slides scores 129, a +46% performance uplift to the older Amber Lake system. What in the world is going on? It’s running on the Atom cores.

Our recommendation, for anyone wanting to test the performance of that single Sunny Cove core, is to implement an affinity mask on the software being used. If the software only knows that one core exists, then it can only run on that core. This is how we suspect that Intel achieved the single core performance gains in benchmarks like SPEC2006. However Intel has more tools at its disposal – there’s a chance that the scheduler for these systems might ignore affinity masks in order to maintain a thermal balance in the design. We must wait until we get a sample in for ourselves.

To a certain extent we see this in the Cinebench R15 multi-threaded test. With a standard 5 thread processor, if you run a standard nT test, we expect it to fill all the cores to give the best performance. In Notebookcheck’s article, we can see that the scheduler has evicted the workload from the big core. This is likely due to power/thermal hotspot reasons. 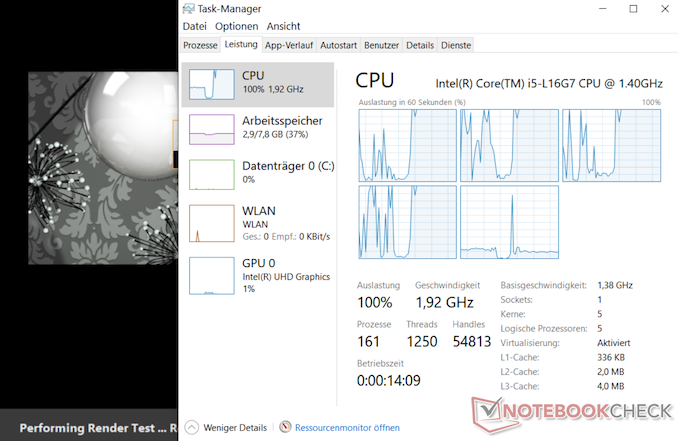 In the task manager on the right, we see the first four Atom cores running at 100% while in the multi-threaded test, while the large Sunny Cove core is relatively idle. Note that the CPU is running at 1.9 GHz, and not the 2.8 GHz that Intel has promoted is the all-core turbo for this product.

But the bottom line is that in most cases, expect Lakefield to perform similar to four Atom cores, just above Goldmont Plus, and not like any of the Skylake/Ice Lake Core products and its derivatives.