Once standing for a unique rugged range of thermal armor clad models designed for endurance, the TUF Sabertooth was a sought after bit of kit. Since after the Intel Z270 days, the TUF or The Ultimate Force brand took a bit of a transformation. These days the TUF brand signifies its entry-level gaming range and the ASUS TUF Z490-Plus Wi-Fi and non-wireless enabled model adds some exciting features for gamers. These include support for up to 128 GB of DDR4-4600 memory, two PCIe 3.0 x4 M.2 slots, and two full-length PCIe 3.0 slots with support for AMD Crossfire multi-graphics card setups. 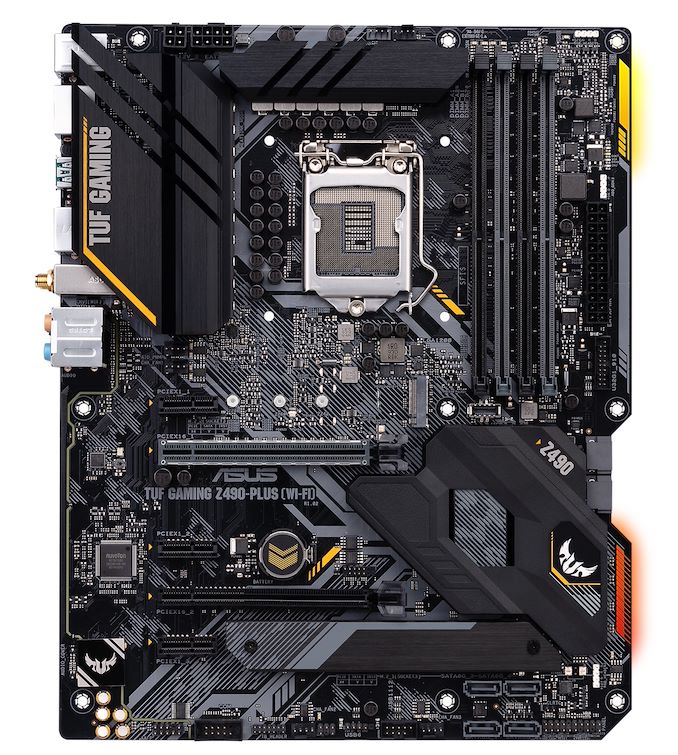 The ASUS TUF Z490-Plus Wi-Fi and the Z490-Plus have, but one minor difference; the Wi-Fi version comes with an Intel AX201 Wi-Fi 6 wireless interface with support for BT 5.1 devices. Outside of this, the specifications are the same with two full-length PCI 3.0 slots which operate at x16/+4 and includes two PCIe 3.0 x4 M.2 slots. With a slight cut-out at the right-hand side of the board for more straightforward installation of SATA cables, there is six in total with two right-angled and four straight-angled SATA ports. The power delivery consists of a 12+2 design, which uses teamed DrMOS power stages, as opposed to high and low side MOSFETs from its previous iterations. Also interesting is ASUS has included a Thunderbolt 3 header to allow users to use TB3 add-on cards, even on its cheaper models.

Not the most explicit rear panel shot, but we will update as more images come in

On the rear panel is a single USB 3.2 G2 Type-C, one USB 3.2 G2 Type-A, and four USB 3.2 G1 Type-A ports. A pair of video outputs consisting of an HDMI 1.4b, and DisplayPort 1.4 allow users to use Intel's integrated graphics. In contrast, five 3.5 mm audio jacks and S/PDIF optical output are powered by a Realtek S1200A HD audio codec. For networking, there is a single Intel I219-V Gigabit Ethernet port, with the Wi-Fi model coming with an Intel AX201 Wi-Fi 6 wireless interface, while a PS/2 combo port sits to the left-hand side.

The ASUS TUF Z490-Plus Wi-Fi is a robust looking entry-level model onto Intel's 10th generation, with plenty of support including a Thunderbolt 3 header, two PCIe 3.0 x4 M.2 slots, and comes with an Intel Wi-Fi 6 wireless adapter. Some of the controller set to keep the TUF series within the budget remit had to be cut back on, which looks to be in the Ethernet and onboard audio, but both are still plenty for users to get to grips with. The ASUS TUF Z490-Plus Wi-Fi has an MSRP of $200 while the non-WiFi TUF Z490 Plus currently hasn't been given a price as of yet.