ASUS has announced just one mini-ITX model for Z490 so far, the ROG Strix Z490-I Gaming. While not clear when it will be released, it includes an actively cooled power delivery heatsink. This is designed to keep the 8+2 power delivery cool with a single 8-pin 12 V ATX CPU power input. This includes a large aluminium rear panel cover, heat pipe connected heatsinks, and comes with two PCIe 3.0 x4 M.2 slots. 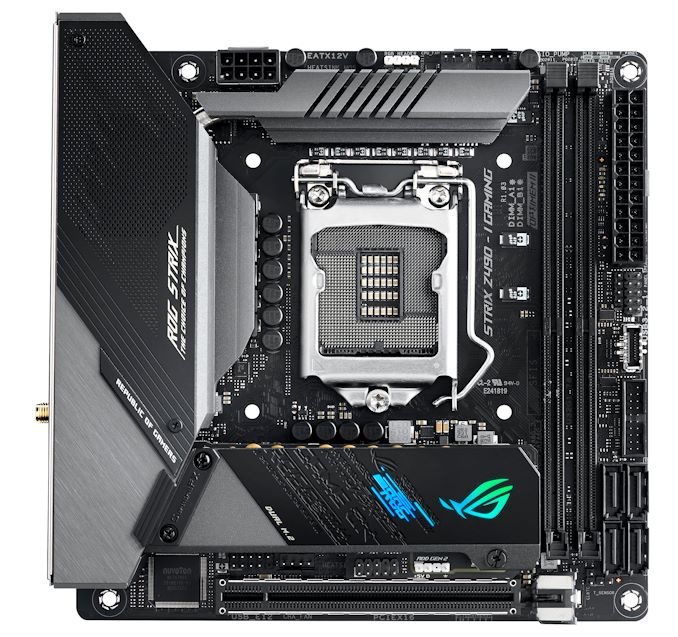 Looking at a rendering of the ASUS ROG Strix Z490-I, it follows a black and silver theme, with a lot of focus on its cooling capabilities. On the power delivery heatsink integrated into the rear panel cover is a small cooling fan, with a U-shaped heatsink design that stretches around the LGA1200 CPU socket. At the bottom is a single full-length PCIe 3.0 x16 slot, with two PCIe 3.0 x4 M.2 slots which are both located on the front of the board underneath a beefy M.2 heatsink. The ROG Strix Z490-I also has four SATA ports with support for RAID 0, 1, 5, and 10 arrays. Due to its small size, it has two memory slots with support for up to 64 GB of DDR4-4800 memory.

While we don't currently have rear panel specs, we do know the ASUS ROG Strix Z490-I has support for up to 13 USB ports when combining front panel headers and what's on the rear panel. From what we can make out, it has three USB 3.2 G2 Type-A, two USB 3.2 G1 Type-A, and two USB 2.0 ports. Included is an Intel AX201 Wi-Fi 6 wireless interface with BT 5.1 device support, as well as a single Intel I225-V 2.5 G Ethernet controller powering the single Ethernet port. A pair of video outputs with a higher-spec HDMI 2.0a, and DisplayPort 1.4 video output. A SupremeFX S1220A HD audio codec powers the three 3.5 mm audio jacks.

Even though we won't see the ASUS ROG Strix Z490-I Gaming at launch, it will come with an MSRP of $300 which is considerably higher than mini-ITX Intel-based desktop boards have been in the past.