As per our processor testing policy, we take a premium category motherboard suitable for the socket, and equip the system with a suitable amount of memory running at the manufacturer's maximum supported frequency. This is also typically run at JEDEC subtimings where possible.

It is noted that some users are not keen on this policy, stating that sometimes the maximum supported frequency is quite low, or faster memory is available at a similar price, or that the JEDEC speeds can be prohibitive for performance. While these comments make sense, ultimately very few users apply memory profiles (either XMP or other) as they require interaction with the BIOS, and most users will fall back on JEDEC supported speeds - this includes home users as well as industry who might want to shave off a cent or two from the cost or stay within the margins set by the manufacturer. Where possible, we will extend out testing to include faster memory modules either at the same time as the review or a later date.

The systems have applied the latest Spectre and Meltdown mitigation patches where applicable. Meanwhile we should note that while the ZombieLoad exploit was announced earlier this year as well, the patches for that have not been released yet. We'll be looking at those later on once they hit.

We ran our original review numbers with the latest available firmware for the MSI MEG X570 ACE motherboard last week (Version  7C35v11). On Saturday the 6th MSI had shared with us a notice about a new version coming out, which became available to download to us on Sunday the 7th, the launch day and date of publication of the review.

We’ve had more time to investigate the new firmware, and have discovered extremely large changes in the behaviour of the frequency boosting algorithm. The new firmware (Version 7C35v12) for the motherboard contains AMD’s new ComboPI1.0.0.3.a (AGESA) firmware.

We discovered the following direct measurable effects between the two firmware versions: 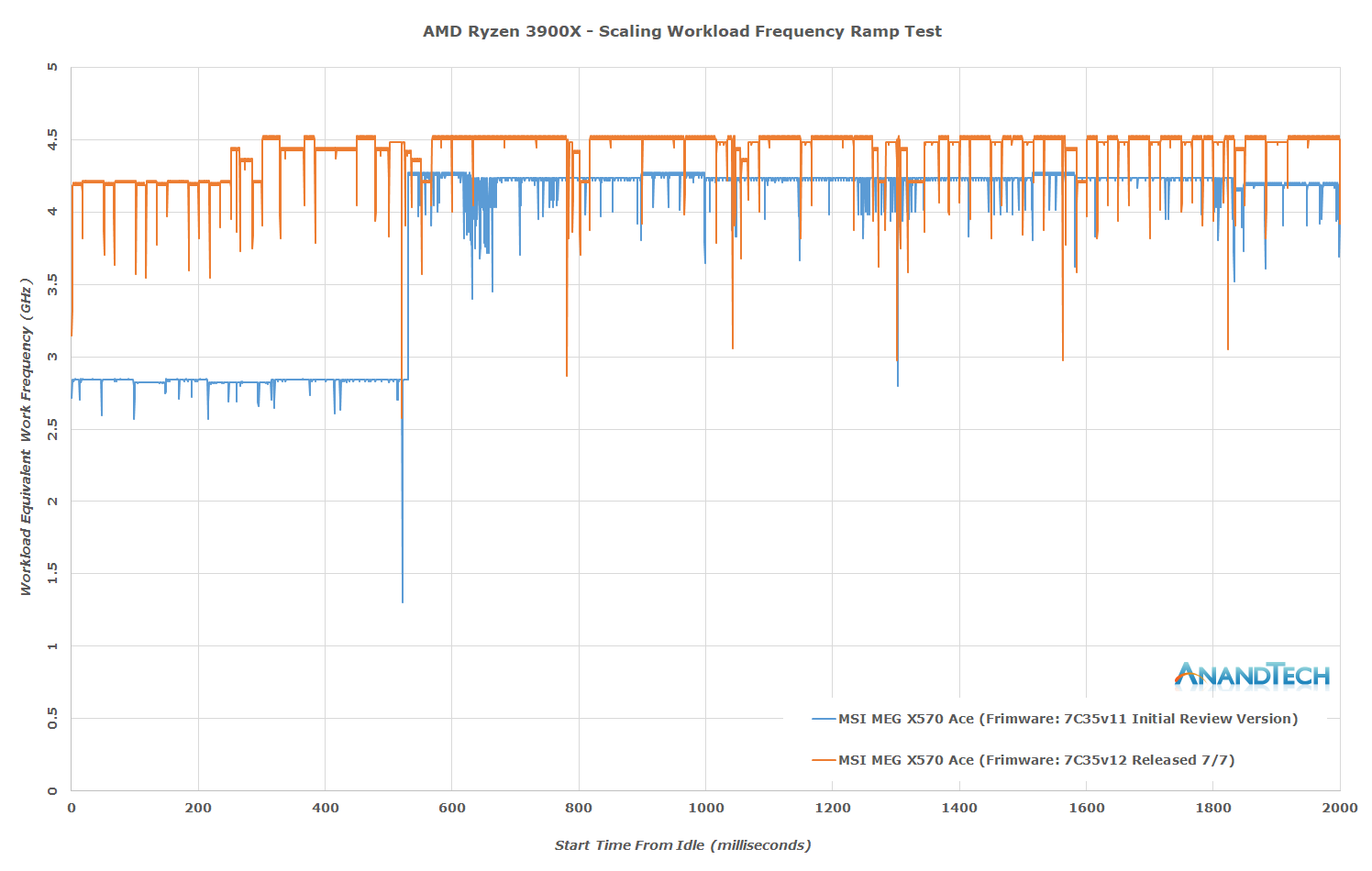 (Note: This is a custom test that uses a fine-grained looping timed fixed instruction chain to derive frequency; it showcases single-core frequency)

We notice a significant change in the CPU’s boosting behaviour, now boosting to higher frequencies, and particularly at a faster rate from idle, more correctly matching AMD’s described intended boost behaviour and latency.

We’re currently in the process of re-running all our suite numbers and updating the article where necessary to reflect the new frequency behaviour.

We've updated the article benchmark numbers on the Ryzen 9 3900X. We've seen 3-9% improvements in exclusive ST workloads. MT workloads have remained unchanged, Gaming had both benefits and negatives. We continue to work on getting updated 3700X numbers and filling out the missing pieces.

Original BIOS results are as of first publication are marked with ** in the graphs.

We've also updated our Ryzen 7 3700X results now. Ultimately our conclusions haven't changed, but AMD does narrow the gap a bit more. For a full summary of our findings, please check out this article.