One of the items that Intel is keen to promote with this launch is an update to its Intel RST algorithm when dealing with ‘Optane Memory’, Intel’s brand for Optane whereby a small amount of storage is placed in front of a larger drive to act as a fast cache. Up to this point, Intel platforms that supported Optane Memory in this configuration could only do so on the drive that was used to boot into the operating system. While this worked well for low-cost users that relied on a single rotational hard-disk drive of rust for their needs, with most enthusiasts using a fast SSD (SATA or PCIe) as their first drive that loads the OS, putting Optane Memory in front of this as a cache was relatively pointless – any gains would be intangible at best. With the new generation of products, Intel has expanded the capabilities of Optane Memory such that it can act as a cache for a non-OS drive. This means that a user can have a fast SSD boot drive, a large spinning drive for storage, and then place Optane in front of that storage drive to potentially get much better performance from the drive. 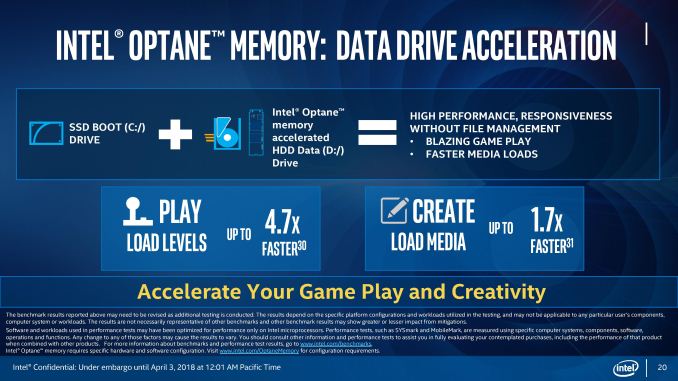 The main idea here is that the large rotational drive is where users store games and large files used in content creation, which often have a long loading time. With the right caching algorithm, and a decent sized Optane Memory drive, Intel likes to promote that loading games and loading media for creative purposes are several factors faster than an equivalent system without an Optane Memory drive.

Part of the news around Optane is that Intel is now creating new processor branding for OEMs that have configurations with Optane. The new brands and logos are similar to the standard Core i5/i7 style that we are used to, however the logos are now a dark blue with white text, and exhibit a plus after the Core i5/i7 name. 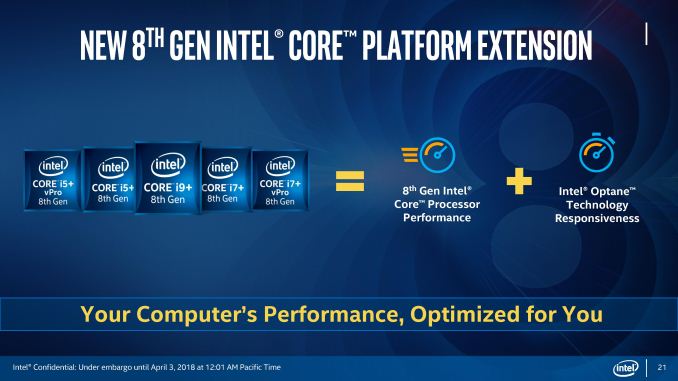 So just to be clear, this is not a new line of processors. We will not have to suddenly deal with a Core i9+-8950HK being different to the non-plus counterpart. This is purely a branding exercise, and one that only covers the i5 and higher at that. However, to complicate things, this means that specification sheets can (and will) list the processors as Core i5+ and Core i7+ and even vPro models. This makes looking for particular processor versions in search engines a lot more difficult for almost no obvious benefit. I mean sure, Intel wants to promote the use of its Optane drives, but we already have the Optane branding and the Optane logos to do that for us. This ends up being another logo put onto the box.

Ultimately, Intel is still marketing Optane, its high-cost R&D product, with low capacities at low cost systems with relatively little margin. While it might seem like a noble goal, to bring extra caching performance down to the lower cost segment, it could very easily be done with SATA or PCIe M.2 drives using regular NAND flash. A lot of users would like to see high-capacity, high-endurance Optane drives moving more into the mainstream, instead of more attempts at funneling in a product like Optane into caching.