The final part of the launch is focused around filling out the processor line-up for the desktop. Intel launched six Coffee Lake-based desktop processors back in October, so we have had almost a five month wait for the rest of the line to see the light of day. In this batch of processors we see the regular and low powered processors that normally sit in Intel’s strategy, as well as a number of Pentium and Celeron parts.

For the Core i7 family, the new entrant is the Core i7-8700T. This will be the only six-core processor, with hyperthreading, to fall into the 35W bracket. It features the full L3 cache support, dual channel memory up to DDR4-2666, and is eligible for vPro support. It is worth noting that the 35W TDP value is only valid when the CPU is at its base frequency, which in this case is 2.4 GHz. At the peak turbo of 4.0 GHz, or for all-cores somewhere in the middle (again, Intel won’t specify), the power will obviously be higher.

In the Core i5, most of the parts are new. As with the Core i5 desktop parts that are already launched, these have six-cores but do not have multithreading. They have a reduced L3 cache per core compared to the Core i7, and it is worth noting that the base frequency for the processors does not actually get that high – only 3.1 GHz for the Core i5-8600. All of the parts support dual channel DDR4-2666, and all but one processor supports vPro.

There are only three new members of the Core i3 section, all of which are quad-core processors. The two Core i3-8300/T parts have the peak 2MB L3 per core, while the Core i3-8100T only has 1.5 MB L3 per core. These parts are all reduced in memory frequency as well, supporting dual-channel DDR4-2400. Intel has no vPro parts in the Core i3 line, but all the Core i3 SKUs will support Optane.

The Pentium Gold processors fit in where the older Core i3 processors once stood: dual core with hyperthreading. Intel rates the ‘full speed’ models at 54W, while the lower-power T-models are at 35W. One of the bigger disadvantages of these parts is the lack of Optane support, plus also the DDR4-2400 memory support, however they do fill up the lower cost market. Intel differentiates the Pentium Gold as having the latest Core microarchitecture compared to Pentium Silver which uses the Atom core design.

No real fancy words for Celeron here: these are Intel’s dual core designs for the cheapest Intel-based PCs. Just pair one up with a H310 motherboard, a single stick of memory, and a cheap HDD, and there’s a PC. What is different is that Intel has dropped the 'G' in the SKU name in the document they gave us (such as G4920). We have seen other documents from Intel that have the G, so we need see why there is a discrepancy.

Update: ARK confirms that all the Celerons have 'G' in the name.

Due to some sleuthing, and despite Intel's insistence these are proprietary information, we have all the official per-core turbo ratios for this processors. 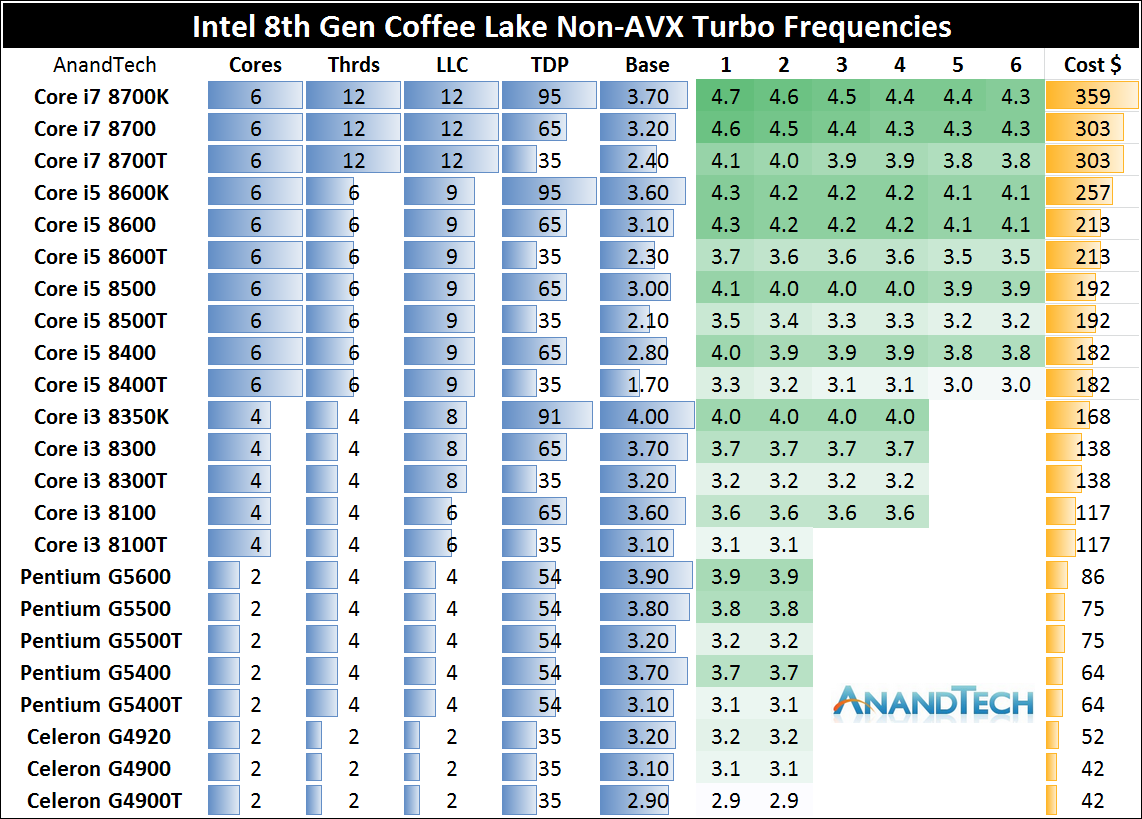