The last two ASRock boards left in their current Z370 lineup are the Z370M-ITX/ac and the Z370 Gaming-ITX/ac. While their pedigree is a bit different, with the latter coming from the Gaming line, they are both mini-ITX sized boards intended to fit in small form factor cases. Due to the size, neither SLI nor Crossfire support is possible due to only one PCIe slot in place, but the idea for this size is to have a small powerhouse. The Gaming-ITX/ac will have more or higher-end features and will come in at a higher price point out of the two, because it also has an onboard Thunderbolt 3 chip. 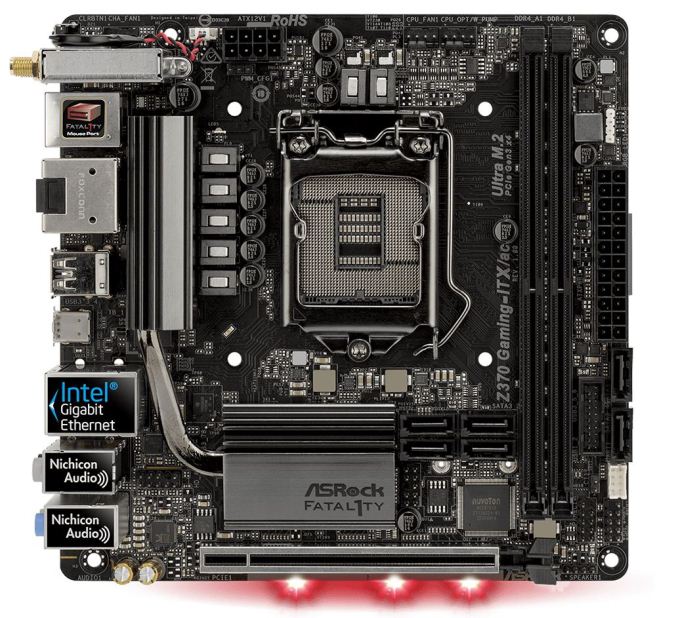 The Gaming-ITX board, as all mITX sized boards seem to, look pretty cramped as there is very little free space on the board. This board uses a heatpipe to connect the power delivery heatsink to the chipset heatsink, with the Thunderbolt controller also taking advantage. Only the Gaming-ITX has a reinforced PCIe slot at the bottom of the board, which is rated to PCIe 3.0 x16 from the processor. As far as overall looks, there isn’t really a theme so much as it is a black PCB with a lot going on in a small space. The board does have red LEDs on the bottom by the PCIe slot and does and an RGB header for adding additional flare. 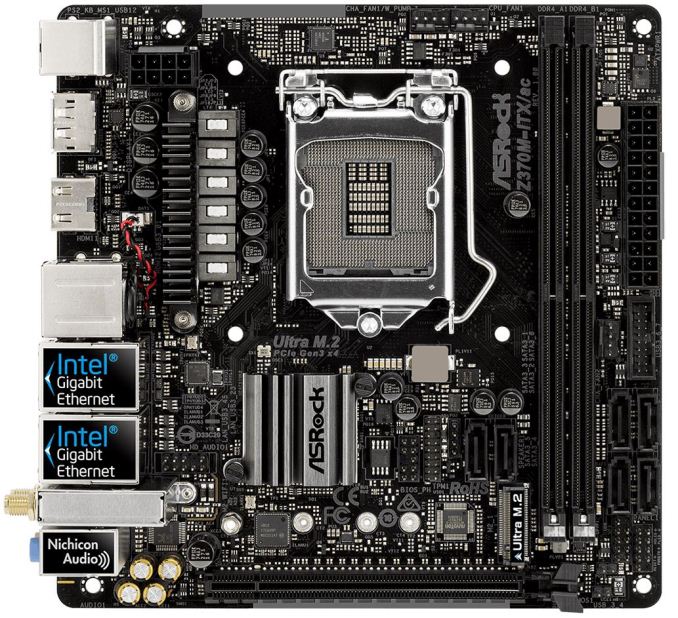 The Z370M-ITX also doesn’t have much in the way of beautification going either. On this board all six of its power delivery phases have a heatsink, but it is noticeably smaller than the one in the Gaming-ITX and is not connected via a heatpipe to the chipset heatsink (which is also slimmed down). Due to the smaller chipset heatsink, the M.2 slot on the Z370M-ITX is located on the front of the board, just above the non-reinforced PCIe slot, rather on the rear. 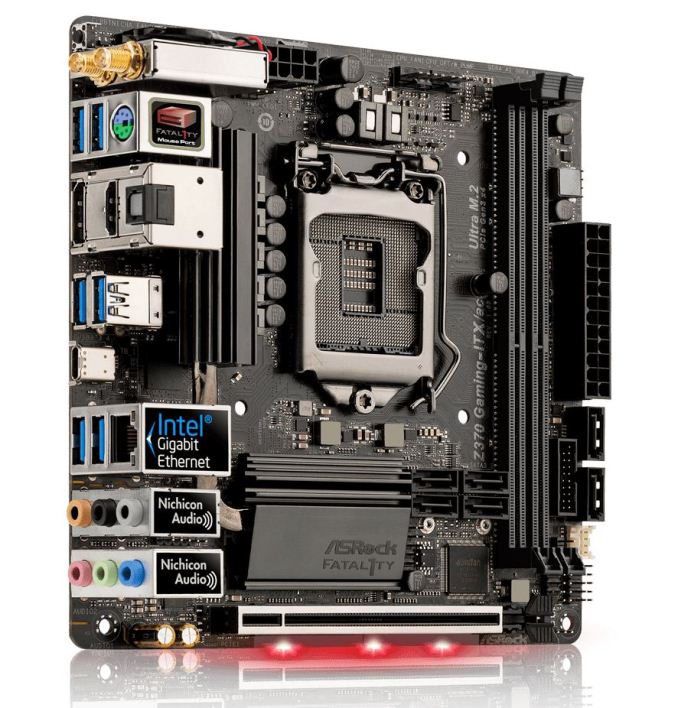 Memory capacity is limited to one module per channel, due to having two slots instead of four because of the size. Similar to the other ASRock boards, the quoted speeds for these two boards are higher than the other vendors, with the Gaming version supporting DDR4-4333 and the standard Z370M-ITX going for DDR4-4000. Interestingly for the PCIe slot, the Gaming-ITX/ac specifications does mention support for PCIe riser cards to extend one x16 slot to two x8 slots, should users have access to an appropriate riser card. That being said, the system does not ship with SLI certification, and thus support may be limited to Crossfire in this scenario. 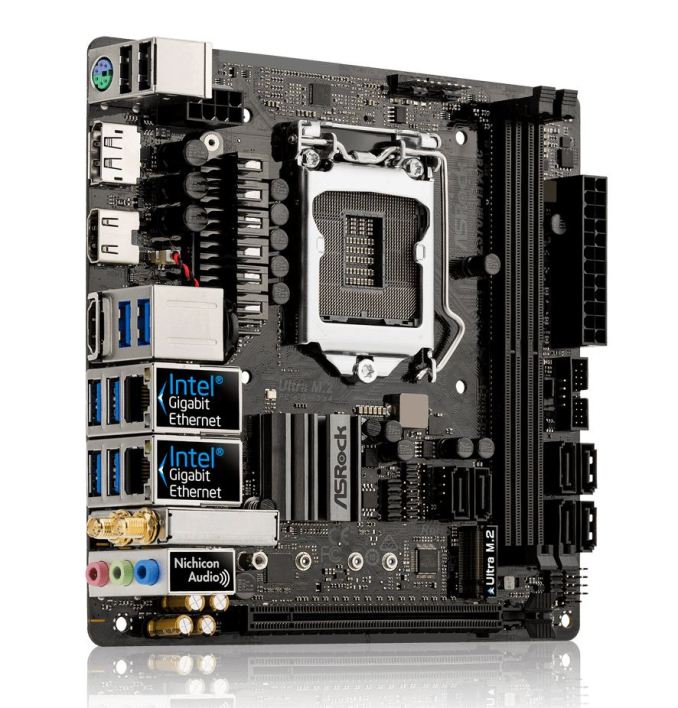 Both boards have a single PCIe 3.0 x4 based M.2 slot, with the Z370M-ITX having it on the front and the Z370 Gaming-ITX on the rear. Despite some of the larger boards from other vendors having only four SATA ports, ASRock goes for all six on both of the mini-ITX boards, and placed such that interlocking cables should not interfere with each other if drives need to be removed.

For fan headers, they each have three, with ASRock's 'CPU Optional/Water Pump' fan header able to output 1.5A/18W. Both of them also have Wi-Fi modules, although the one in the Gaming uses the Intel AC8265 while the Z370M-ITX uses the AC3165. The boards differ in audio, with Gaming-ITX/ac using the Realtek ALC1220 and adding all the bells and whistles from the Gaming line (Nichicon Gold Series audio caps, T.I NE5532 headset amplifier), compared to the Z370M-ITX which uses a Realtek ALC892. The boards also differ on networking in favor of the Z370M-ITX which has dual Intel (I219-V, I211-AT) whereas the Gaming-ITX only has one (I219-V). 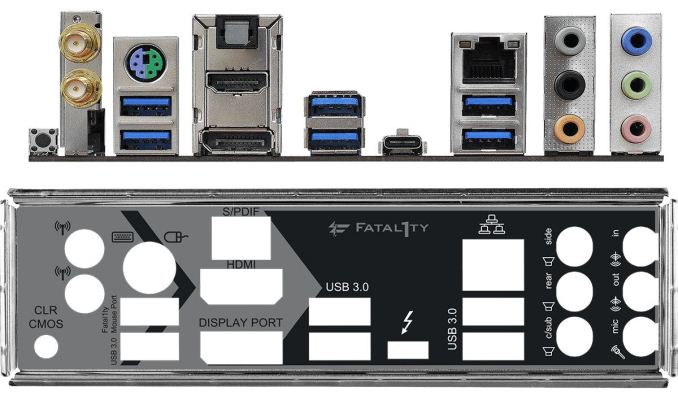 The key difference in the support between the two boards is going to be the Thunderbolt 3 port on the Gaming-ITX. This port supports video outputs and USB 3.1. Other USB support on the back panel of the Gaming-ITX/ac is provided by the six USB 3.1 (5 Gbps) ports. Elsewhere on the panel is a combination PS/2 port, a clear CMOS button, the antenna connectors, HDMI video output, DisplayPort video output, the ethernet connection, the audio jacks, and SPDIF.

For the Z370M-ITX/ac, there is no Thunderbolt port, but in its place are two HDMI ports. This comes with the DisplayPort to round out the video outputs. USB connectivity comes from two USB 2.0 ports and six USB 3.1 (5 Gbps) ports. The two network ports look fairly ominous, but are paired with the Wi-Fi module just next door. The audio supplies three jacks, with no SPDIF here.