The last few boards from ASRock will be of the small form factor variety. We normally do not see too many options in this space, especially close to the chipset launch. ASRock got a head start with shrinking the ATX sized Pro4 to the micro-ATX format and calls it the Z370M Pro4. The Z370M Pro4 uses the same power delivery setup as the full-sized twin, albeit on a shorter board. Even though its smaller in size, there are two full-length PCIe slots as well as two M.2 slots. It looks to have very similar features, just in a smaller package.

For aesthetics, a gray color runs across the board from the top of the audio section through the PCIe area and past the chipset to the edge of the board. The chipset heatsink gets much smaller on the micro-ATX version due to the less free real estate on the smaller board. Outside of that, we get the same single VRM heatsink, the same capacitors, and the same vanilla appearance. Users will not find an RGB LED on the board, nor a header to add one. 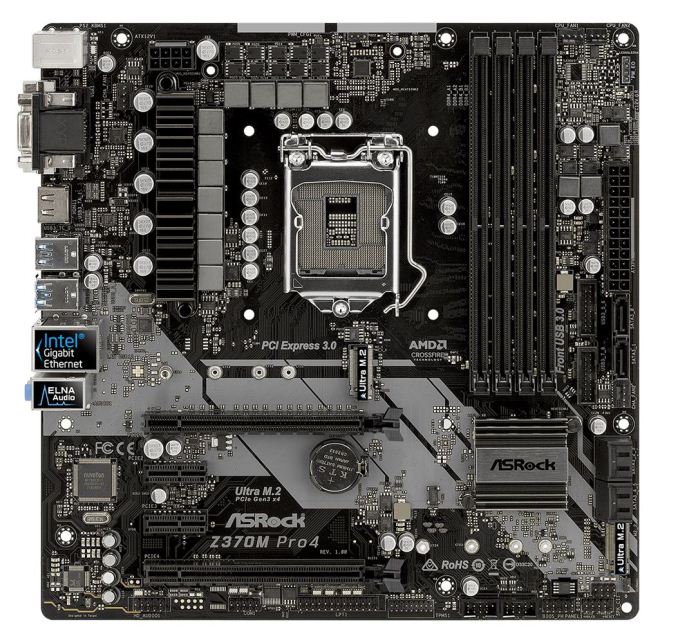 Even in mATX form, we get four memory slots which handle up to 64GB, with a rated supported speed up to DDR4-4300. There are two full-length PCIe slots, the first from the CPU at x16 and the second from the chipset at x4, and two open-ended x1 slots to round out PCIe connections.

Six SATA ports can be found on the board, with four mounted horizontally and two vertically a bit further up the board. All the SATA ports support RAID 0, 1, 5, and 10. The Z370M Pro4 also has two M.2 slots, with both able to fit an 80mm module. The first M.2 slot is SATA only while the second supports PCIe. Due to lane sharing, if the first M.2 socket is occupied by a SATA type M.2 device, SATA 0 will be disabled.

The board has four fan headers, two for the CPU (1 x 3-pin, 1 x 4-pin) and two 4-pin chassis fan connectors that auto-detect if a three or four pin fan is in use. Audio duties are taken care of by the Realtek ALC892 codec and uses ELNA audio caps. Network support is handled by a single Intel I219-V GbE. Thunderbolt support is not found on the Z370M Pro4. 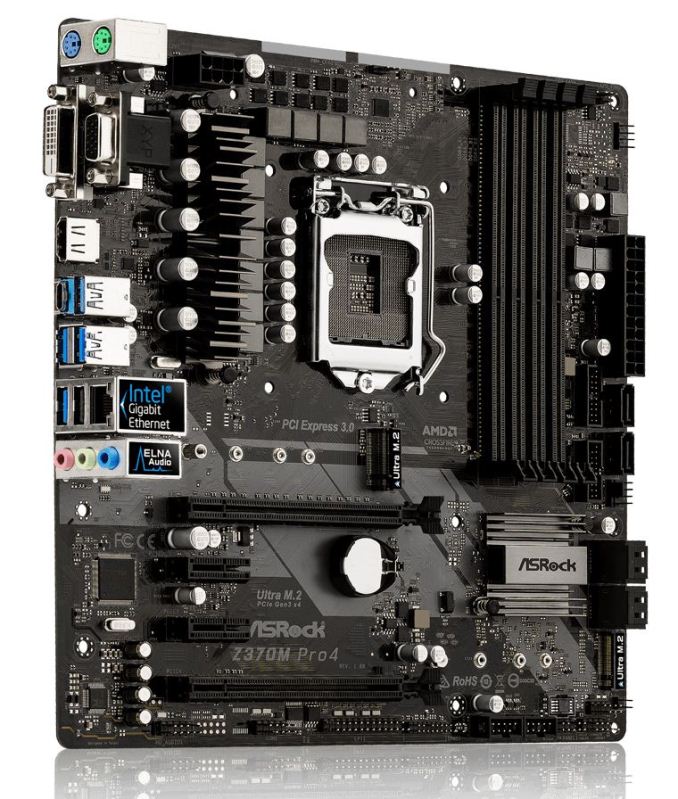 USB support on the back panel consists of four USB 3.1 (5 Gbps) Type-A ports and one Type-C port. Additionally, there is one USB 2.0 port. The rest of the back panel IO contains separate PS/2 ports for mouse and keyboard, D-Sub/DVI-D/HDMI video outputs, Intel gigabit Ethernet, and the three-jack audio stack.