The MSI Z370 Tomahawk positions itself as a mid-range gaming board from the 'Arsenal Gaming' lineup (boards that have weapon-based names). The Arsenal lineup, like the Performance and the Enthusiast lines, is aimed towards hardcore gamers, including eSports participants. As such, the boards in this category are tested to go through 24 hours of testing both offline and online gaming by eSports players. Obviously, not all boards are tested in this way, but likely a few were before mass production (though to be honest, if they fail that test, there are serious issues wrong).

The look of the Tomahawk differs from the Enthusiast gaming series boards from MSI. Both use a black PCB, but the VRM heatsinks on the Tomahawk are redesigned and looks to be a bit smaller. The shroud for the back panel looks different as well, going for a more military look. The PCH heatsink is styled differently, similar to an SLI HB bridge even though this board does not support SLI, and has the MSI name in the middle with an LED illuminating the heatsink. The remaining RGB LEDs are on the audio separation line and the back of the board, giving it more of a backlit glow when inside of a case. There is also some gray stenciling on the board. If more RGB LEDs are in the future, the Tomahawk does have one additional RGB LED connector. Of the three PCIe slots, the first one for graphics cards is steel reinforced. 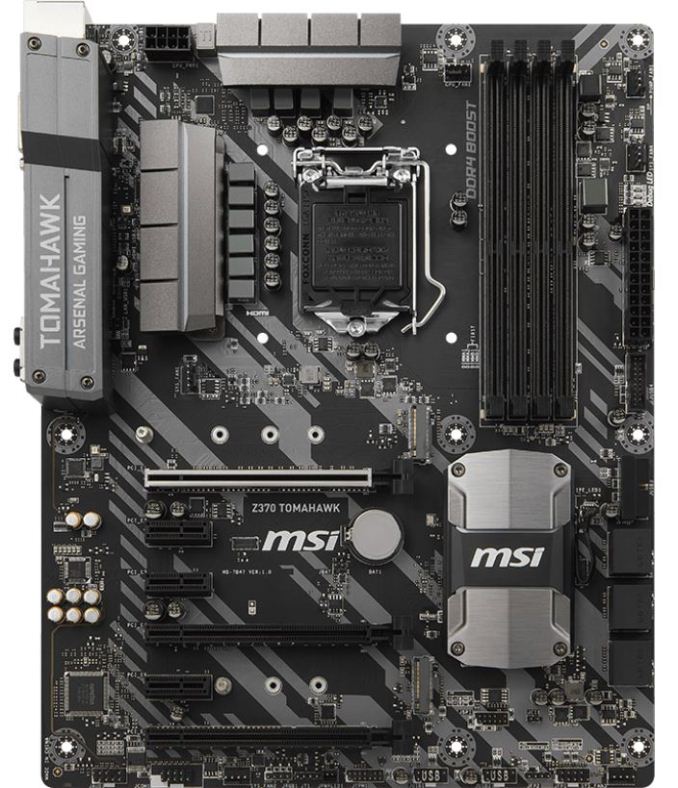 The memory capacity across the four memory slots sits at 64GB, while speeds on the Tomahawk are rated up to DDR4-4000 through MSI’s DDR4 Boost. There are a total of three full-length PCIe slots, with the first one being fortified by MSI’s Steel Armor and coming from the processor. The other two are x4 and x1 slots from the chipset, and between the three full-length slots are another three PCIe x1 slots powered by the chipset.

The Tomahawk includes six SATA ports supporting RAID 0, 1, 5, and 10. The ports are all located to the right of the chipset and face the edge of the board. The board has two M.2 slots, with the first above the top PCIe slot and able to hold up to a 110mm drive. The 2nd M.2 slot is mounted between the two full-length black PCIe slots and holds up to an 80mm drive. A total of six fan connectors can be found on the board around the CPU socket, two in the upper right-hand corner, a couple on the bottom of the board, and another below the VRM heatsink on the left side. Audio duties are handled by the older Realtek ALC9892 codec, which uses Chemicon audio capacitors. The audio chipset itself does not appear to be EMI shielded, however there is board separation between the analog and digital parts of the system. A single Intel I219-V gigabit Ethernet controller is also present. 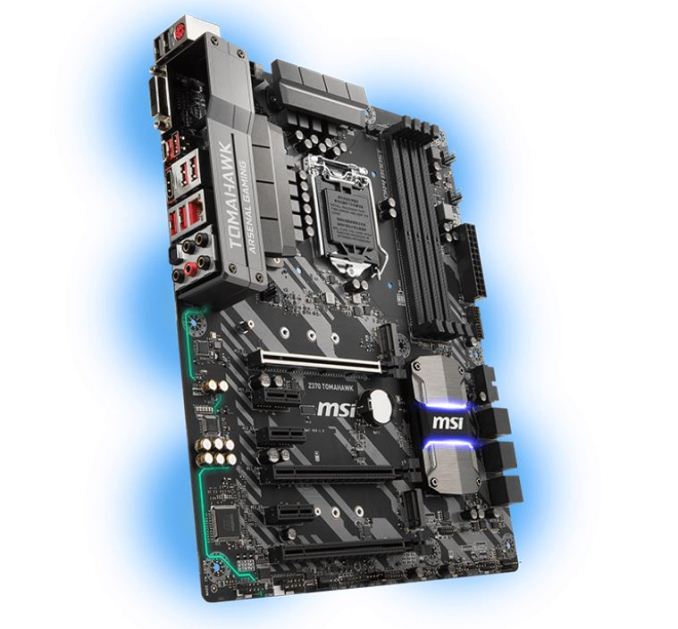 Support for USB 3.1 (10 Gbps) comes from the ASMedia ASM3142 controller and gives one Type-C port and one Type-A port, both located on the back panel. Four USB 3.1 (5 Gbps) ports and two USB 2.0 ports are also on the back panel, with two headers of each type on the board. The remainder of the back panel consists of a PS/2 port, DVI-D and HDMI video outputs, the Intel network controller, and an audio jacks plus SPDIF.