The next board in the Performance Gaming line is the Z370 Krait Gaming. What immediately jumps out to me is the difference in style compared to the previous boards: gone are the more flashy shrouds and heatsinks, replaced with a basic rectangle shaped shroud and more simple chipset heatsink, albeit with dragon scale motifs on the board and heatsinks.

The Z370 Krait gaming motherboard uses an all-black PCB, with black aluminum VRM heatsinks, two reinforced PCIe slots along with two of the four memory slots in white. The motherboard has white stenciling around the board for styling accents which touch the VRM heatsinks, back panel shroud, and across the bottom of the board, mirroring one of the features of Krait Gaming boards in the past: a pure black and white base design. The PCH heatsink is the first to display the MSI Gaming Dragon, and moves the RGB LEDs to the base of the heatsink, which defaults to a white color. The remaining RGB LEDs are on the back of the board and the audio separation strip, and users are able to add an RGB strip using the RGB LED connector on board. 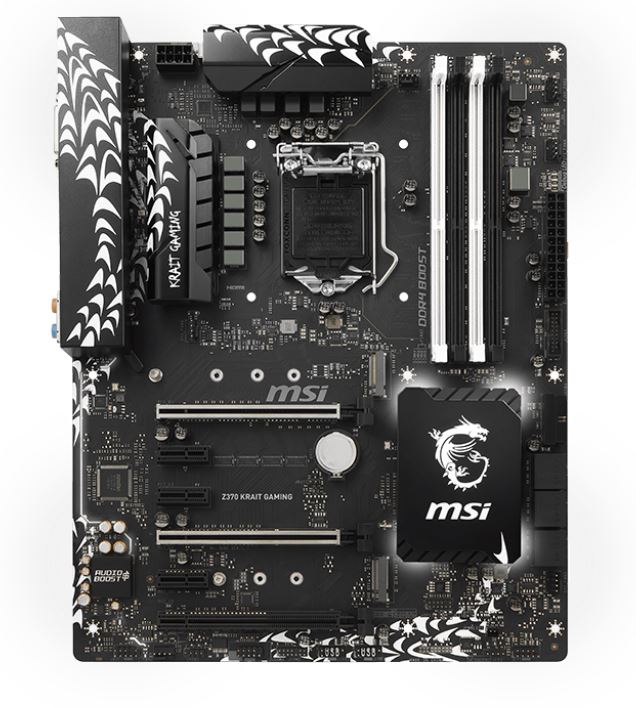 The memory support is up to 64 GB, with memory speeds up to DDR4-4000. The Krait Gaming uses double-sided memory slots to aid in securing the memory, and based on the cost of the board, do not use any enhanced reinforcement.

The same PCIe configuration, both physical and electrical, on the Gaming Pro Carbon AC is found here with three full-length slots (two using the Steel Armor), and three PCIe x1 slots. The lane breakdown is the same with x16 and x8 speeds from the CPU in the first two slots while the third PCIe slot runs at x4 and gets its lanes from the chipset. The board supports 2-way SLI from NVIDIA and 3-way Crossfire from AMD.

For storage connectivity, the Krait Gaming uses the six SATA ports from the chipset. Two M.2 slots, both supporting PCIe 3.0 x4 and SATA, are found above the first and third PCIe slots but forgo any additional M.2 cooling. The top M.2 slot holds up to a 110mm module while the bottom can hold up to 80mm. This board also comes bundled with a U.2 Host Card, allowing for a U.2 SSD to be used connected to one of the M.2 slots.

For cooling, the board has six 4-pin fan headers, which allow for voltage or PWM control, scattered around the board. Audio is handled by the EMI shielded Realtek ALC1220 codec with Chemicon audio capacitors and has a dedicated headphone amplifier. MSI’s Nahimic2+ software, as part of MSI's audio software licensing strategy, is able to manipulate the sound to user preferences. The Intel I219-V network controller is in play here, with software-based bandwidth management. 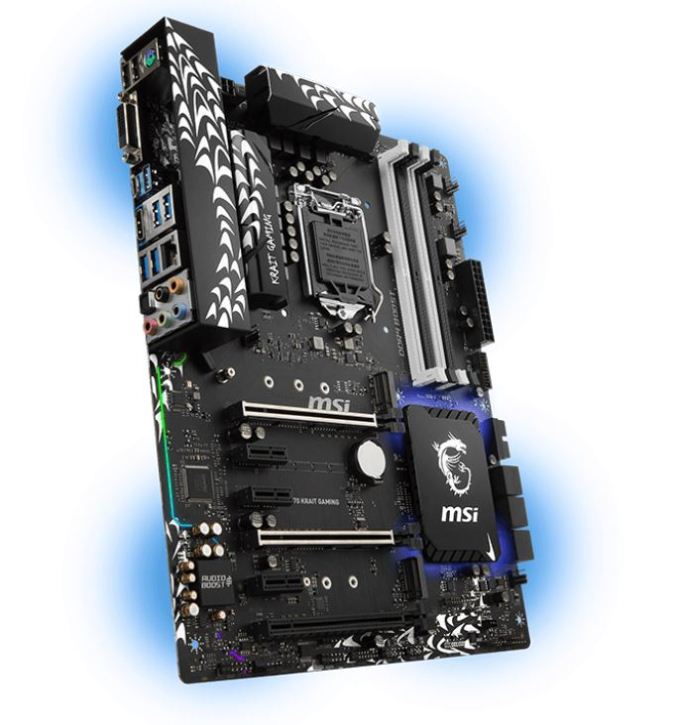 USB 3.1 (10 Gbps) comes from the ASMedia 3142 controller with one Type-C and one Type-A on the rear panel. Four USB 3.1 (5 Gbps) ports and two USB 2.0 ports are the back panel, with two headers for each on the board. The back panel also contains a combination PS/2 port, DVI-D and HDMI for video output, and the audio jacks with SPDIF.