In a very brief teaser, AMD this afternoon has released a picture of their first Radeon RX 6000 video card. No further details about the card are given, but based on the sizable triple fan design and dual 8-pin PCIe power connectors, it stands to reason that we’re looking at one of AMD’s high-end card designs. Overall the design looks reminicant of the Radeon VII, which is not terribly surprising since that is the last high-end (high-powered) video card released by AMD. Don’t be surprised if we see more teasers over the coming weeks, as AMD gears up for its October CPU and GPU presentations. AMD will be holding its “Next Generation Radeon Graphics” keynote on October 28th at noon Eastern. 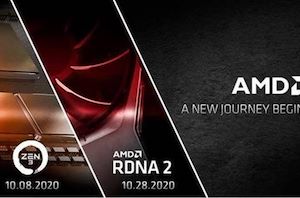 AMD today has announced that they will be making a pair of consumer product presentations in October. The chipmaker, who has been fairly quiet since the spring, will be...