Moving on from our look at gaming performance, we have our customary look at compute performance, bundled with a look at theoretical tessellation performance. Unlike our gaming benchmarks where NVIDIA’s architectural enhancements could have an impact, everything here should be dictated by the core clock and SMs, with the GTX 570’s slight core clock advantage over the GTX 480 defining most of these tests. 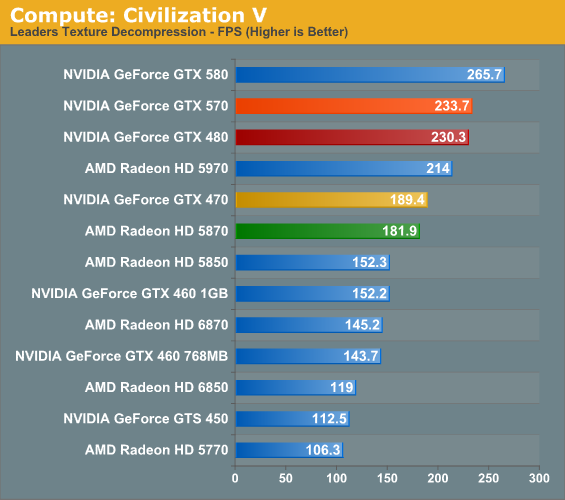 The core clock advantage for the GTX 570 here is 4.5%; in practice it leads to a difference of less than 2% for Civilization V’s texture decompression test. Even the lead over the GTX 470 is a bit less than usual, at 23%. Nor should the lack of a competitive placement from an AMD product be a surprise, as NVIDIA’s cards consistently do well at this test, lending credit to the idea that it’s a compute application better suited for NVIDIA’s scalar processor design. 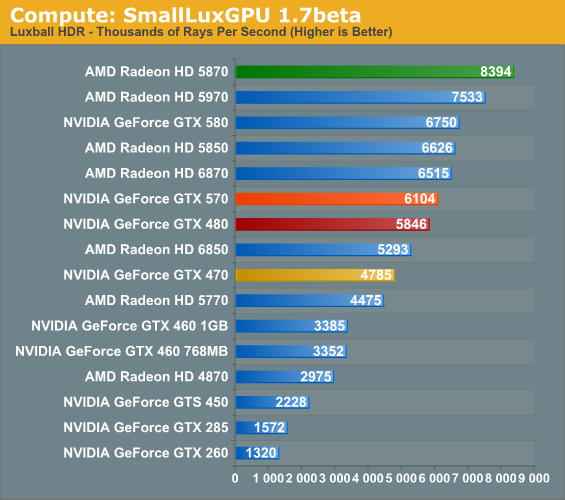 SmallLuxGPU is rather straightforward in its requirements: compute and lots of it. The GTX 570’s core clock advantage over the GTX 480 drives a fairly straightforward 4% performance improvement, roughly in line with the theoretical maximum. The reduction in memory bandwidth and L2 cache does not seem to impact SmallLuxGPU. Meanwhile the advantage over the GTX 470 doesn’t quite reach its theoretical maximum, but the GTX 570 is still 27% faster.

However as was the case with the GTX 580, all of the NVIDIA cards fall to AMD’s faster cards here; the GTX 570 is only between the 6850 and 6870 in performance, thanks to AMD’s compute-heavy VLIW5 design that SmallLuxGPU excels at. The situation is quite bad for the GTX 570 as a result, with the top card being the Radeon 5870, which the GTX 570 underperforms by 27%.

Our final compute benchmark is a Folding @ Home benchmark. Given NVIDIA’s focus on compute for Fermi and in particular GF110 and GF100, cards such as the GTX 580 can be particularly interesting for distributed computing enthusiasts, who are usually looking for the fastest card in the coolest package. 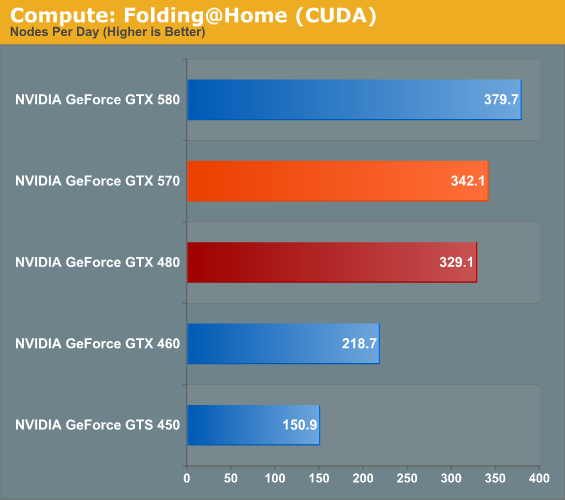 Once more the performance advantage for the GTX 570 matches its core clock advantage. If not for the fact that a DC project like F@H is trivial to scale to multi-GPU configurations, the GTX 570 would likely be the sweet spot for price, performance, and power/noise.

Finally, to take another look at GTX 570’s performance, we have the return of our normalized data view that we first saw with our look at the GTX 580. Unlike the GTX 580 which had similar memory/ROP abilities as the GTX 480 but more SMs, the GTX 570 contains the same number of SMs with fewer ROPs and a narrower memory bus. As such while a normalized dataset for the GTX 580 shows the advantage of the GF110’s architectural enhancements and the highter SM count, the normalized dataset for the GTX 570 shows the architectural enhancements alongside the impact of lost memory bandwidth, ROPs, and L2 cache. 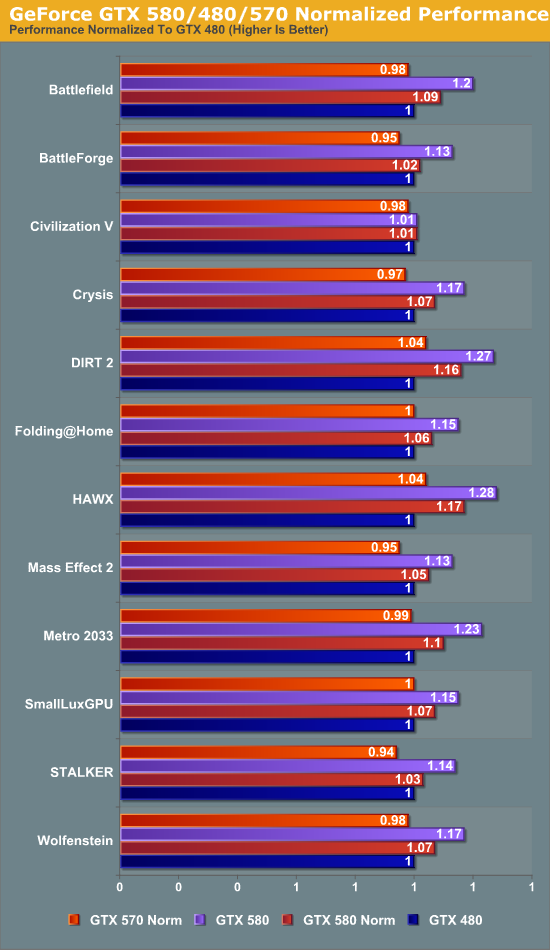 The results certainly paint an interesting picture. Just about everything is ultimately affected by the lack of memory bandwidth, L2 cache, and ROPs; if the GTX 570 didn’t normally have its core clock advantage, it would generally lose to the GTX 480 by small amounts. The standouts here include STALKER, Mass Effect 2, and BattleForge which are all clearly among the most memory-hobbled titles.

On the other hand we have DIRT 2 and HAWX, both of which show a 4% improvement even though our normalized GTX 570 is worse compared to a GTX 480 in every way except architectural advantages. Clearly these were some of the games NVIDIA had in mind when they were tweaking GF110.