Last but not least as always is our look at the power consumption, temperatures, and acoustics of the GTX 570. While NVIDIA’s optimizations to these attributes were largely focused on bringing the GTX 480’s immediate successor to more reasonable levels, the GTX 570 certainly stands to gain some benefits too.

Starting with VIDs, we once again only have 1 card so there’s not too much data we can draw. Our GTX 570 sample has a lower VID than our GTX 580, but as we know NVIDIA is using a range of VIDs for each card. From what we’ve seen with the GTX 470 we’d expect the average GTX 570 VID to be higher than the average GTX 580 VID, as NVIDIA is likely using ASICs with damaged ROPs/SMs for the GTX 570, along with ASICs that wouldn’t make the cut at a suitable voltage with all functional units turned on. As a result the full power advantage of lower clockspeeds and fewer functional units would not always be realized here. 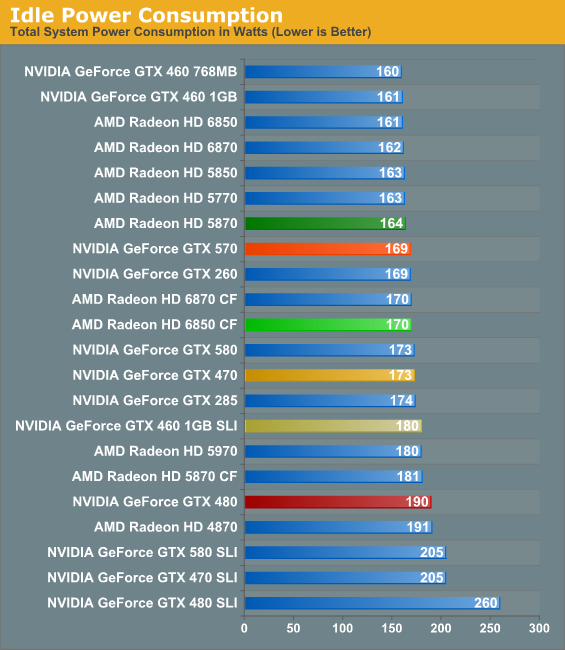 With fewer functional units than the GTX 580 and a less leaky manufacturing process than the GTX 400 series, the GTX 570 is the first GF1x0 card to bring our test rig under 170W at idle. NVIDIA’s larger chips still do worse than AMD’s smaller chips here though, which is driven home by the point that the 6850 CF is only drawing 1 more watt at idle. Nevertheless this is a 4W improvement over the GTX 470 and a 21W improvement over the GTX 480; the former in particular showcases the process improvements as there are more functional units and yet power consumption has dropped. 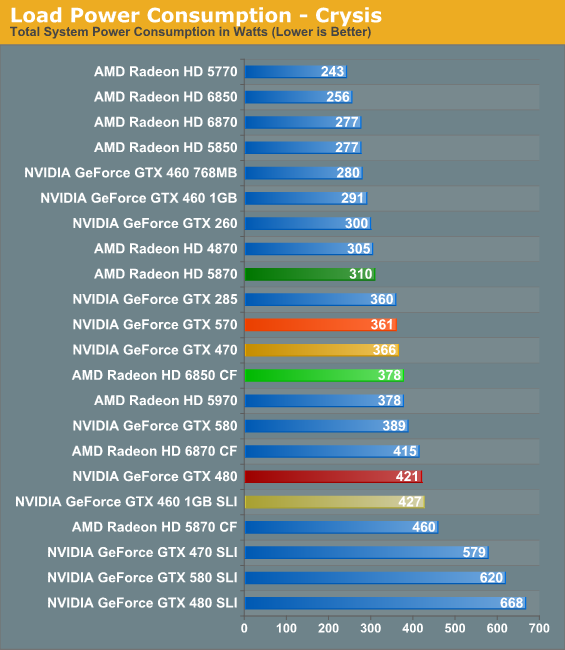 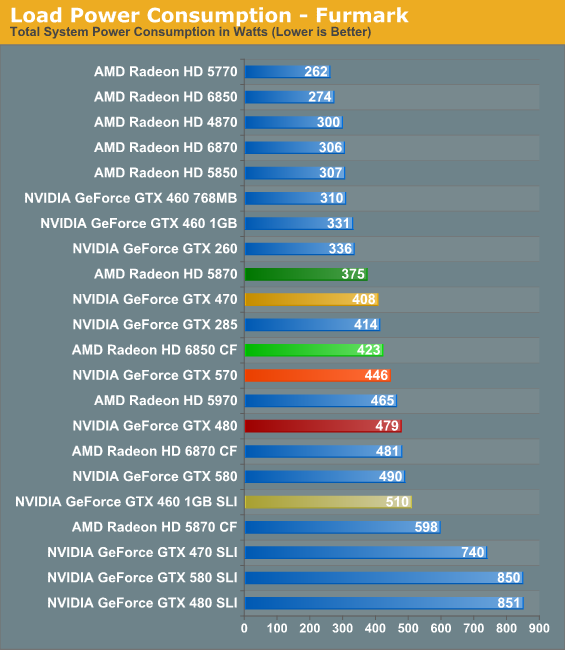 Under load we once again see NVIDIA’s design and TSMC’s process improvements in action. Even though the GTX 570 is over 20% faster than the GTX 470 on Crysis, power consumption has dropped by 5W. The comparison to the GTX 480 is even more remarkable at a 60W reduction in power consumption for the same level of performance, a number well in excess of the power savings from removing 2 GDDR5 memory chips. It’s quite remarkable how a bunch of minor changes can add up to so much.

On the flipside however we have the newly reinstated FurMark, which we can once again use thanks to W1zzard of TechPowerUp’s successful disabling of NVIDIA’s power throttling features on the GTX 500 series. We’ve rebenched the GTX 580 and GTX 580 SLI along with the GTX 570, and now have fully comparable numbers once more.

Of course the stand-outs here are AMD’s cards, which benefit from AMD’s small, more power efficient chip designs. The Radeon HD 5870 draws 50W+ less than the GTX 570 in all situations, and even the 6850 CF wavers between being slightly worse and slightly better than the GTX 570. With the architecture and process improvements the GTX 570’s power consumption is in line with historically similar cards, but NVIDIA still cannot top AMD on power efficiency. 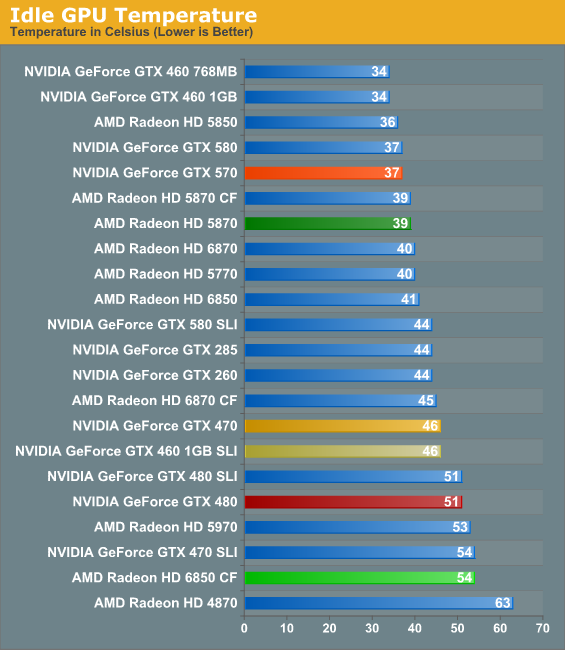 Up next are idle temperatures. With nearly identical GPUs on an identical platform it should come as little surprise that the GTX 570 performs just like a GTX 580 here: 37C. The GTX 570 joins the ranks among some of our coolest idling high-end cards, and manages to edge out the 5870 while clobbering the SLI and CF cards. 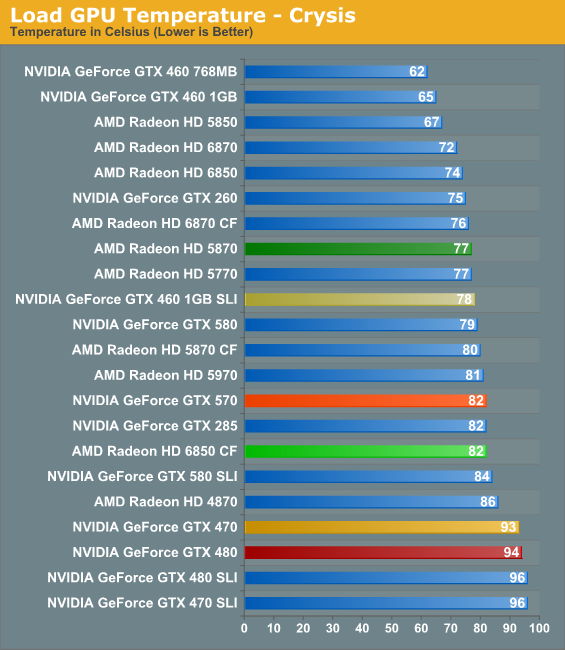 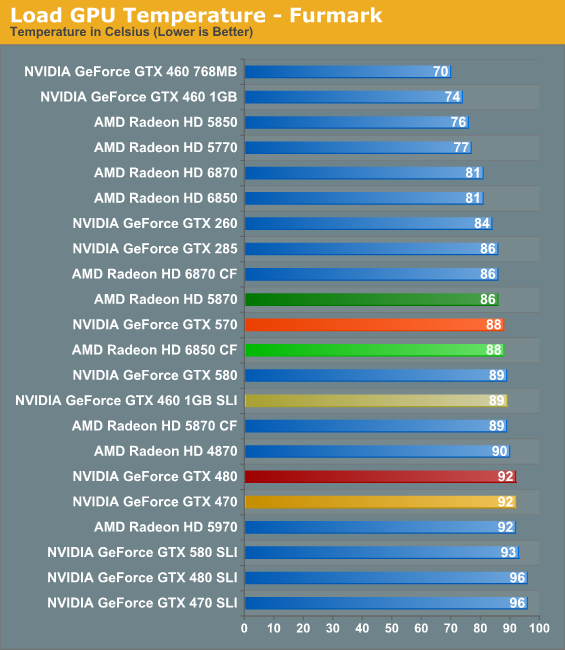 With the same cooling apparatus as the GTX 580 and lower power consumption, we originally expected the GTX 570 to edge out the GTX 580 in all cases, but as it turns out it’s not so simple. When it comes to Crysist the 82C GTX 570 is 3C warmer than the GTX 580, bringing it in line with other cards like the GTX 285. More importantly however it’s 11-12C cooler than the GTX 480/470, driving home the importance of the card’s lower power consumption along with the vapor chamber cooler. Is does not end up being quite as competitive with the 5870 and SLI/CF cards however, as those other setups are between 0C-5C cooler.

As for FurMark, temperatures approach the mid-to-upper 80s, putting it in good company of most other high-end cards. The 5870 edges out the GTX 570 by 2C, while everything else is as warm or warmer. The GTX 480/470 in particular end up being 4C warmer, and as we’ll see a good bit louder. 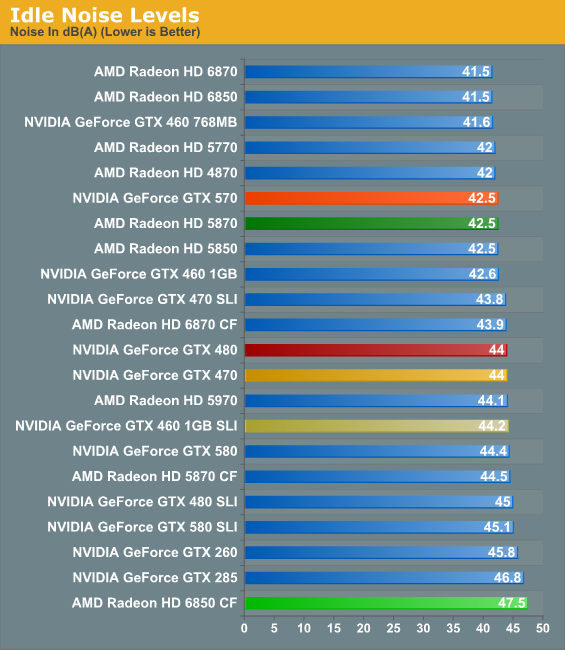 It’s once we look at our noise data that it’s clear NVIDIA has been tinkering with the fan parameters of their design for the GTX 570, as the GTX 570 doesn’t quite match the GTX 580 here. When it comes to idle noise for example the GTX 570 manages to just about hit the noise floor of our rig, emitting 1.5dB less noise than the GTX 580/480/470. For the purposes of our testing, it’s effectively a silent card at idle in our test rig. 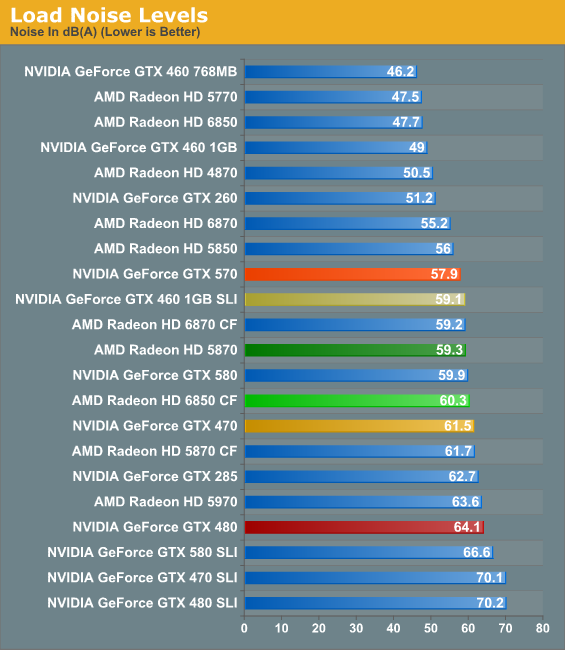