With the variety of card designs it’s the difference in power draw, heat dissipation, and acoustics that truly separate the cards. It’s not just the difference in physical designs that helps set these cards apart, but also how the manufacturer has decided to tune the cards to balance these attributes. A balanced card is usually the most desirable.

As we noted in the introduction, all of our 6850s except the reference card have a load voltage of 1.148v, versus 1.094v. We’re still trying to get to the bottom of the issue, but in the meantime this means all of these cards run worse than the reference 6850 when it comes to power consumption. 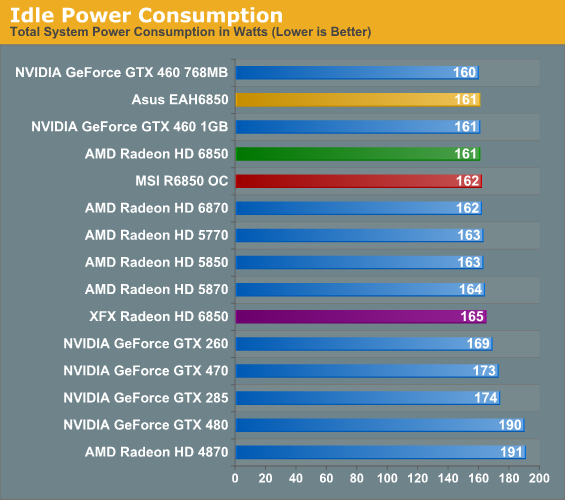 Out of our 3 partner cards and our reference card, our idle power results are tightly clustered among all of the 6850s except for the XFX card which draws a few more watts at idle. We believe this is due to XFX’s fan choice, though we can’t rule out component selection either. 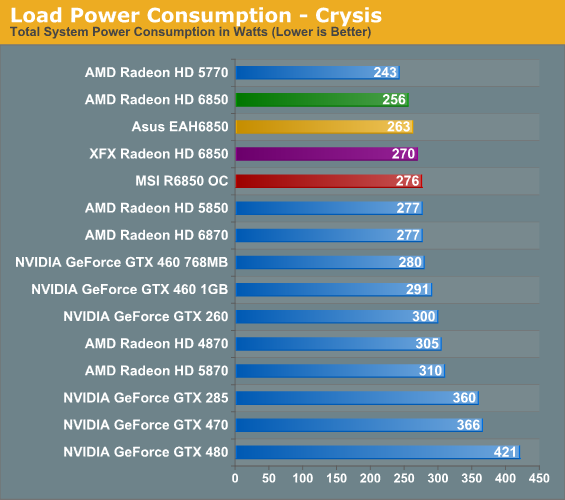 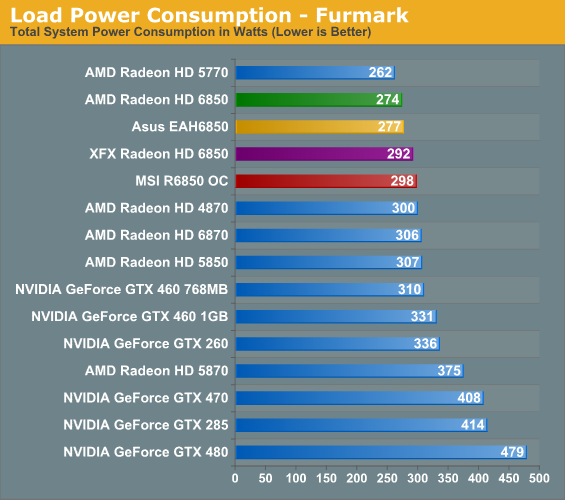 In terms of power consumption the Asus card is closest to the reference 6850, followed by the XFX and then the MSI card. This isn’t particularly good for XFX here, as the other partner cards all have at least a token overclock while the XFX card is doing notably worse than the 6850 reference cards even though it’s operating at the same clockspeeds. Even compared to the Asus card it’s doing worse here.

Meanwhile the MSI R6850 ends up being rather close to the 5850. Given that it achieves 5850-like performance, this isn’t particularly surprising. 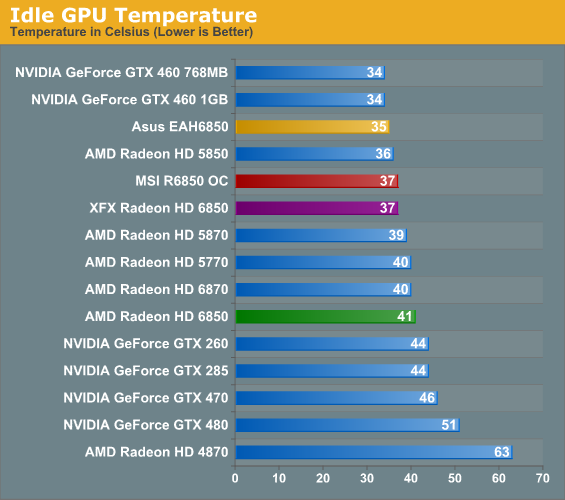 All 3 partner cards do better than the 5850 when it comes to idle temperatures thanks to their open designs. The price of a fully exhausting design is more noise and higher temperatures, which the reference 6850 pays the price for here. 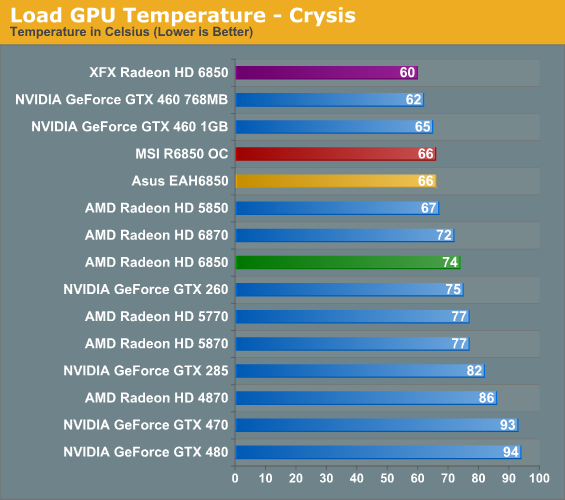 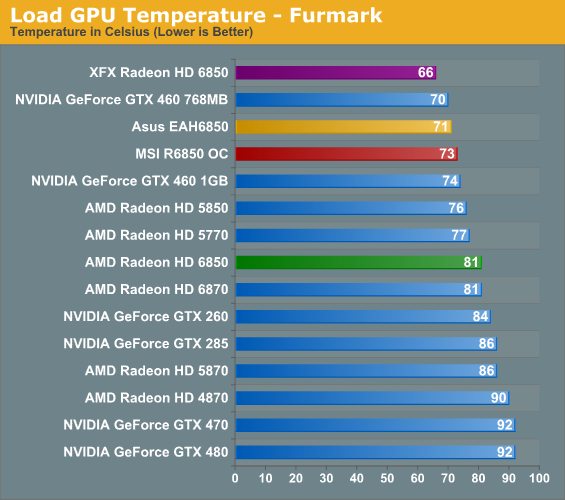 Once again the open coolers on the partner cards give them a significant leg up over the reference card. Even with the reference card’s lower power consumption, it runs hotter than all the open cards as we’d expect. Topping this chart is the XFX card, which with XFX’s extreme focus on cooling manages to hit only 60C on Crysis and 66C under FurMark.  This is followed by the Asus and MSI cards, which are neck-and-neck, which is a reasonable outcome given the similarities between their coolers. All of the partner 6850s end up doing better than the NVIDIA GTX 460 1GB, which uses a cooler similar to the XFX card. 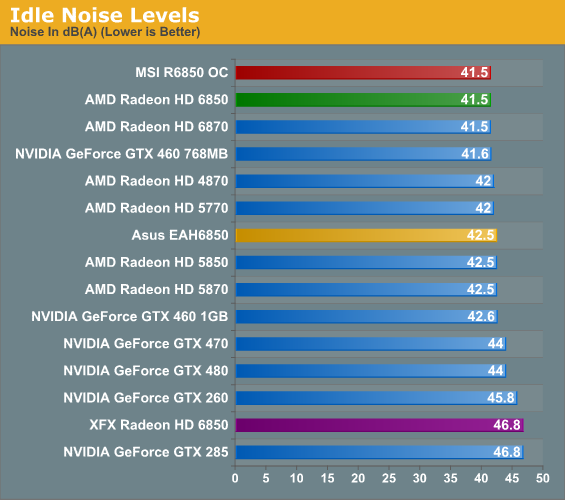 At idle most cards run up against our noise floor. The standouts here are the Asus card, which ends up being a dB over the quietest cards, while the XFX card does significantly worse here at 46.8dB. In practice the Asus card shouldn’t be any worse than the other cards, but the XFX is noticeable (but not distracting) at idle. 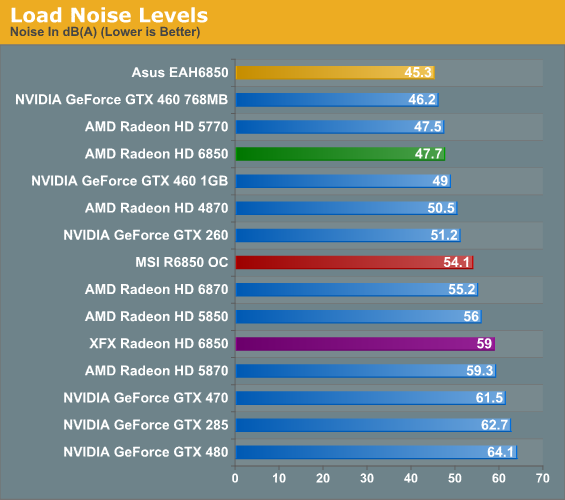 It’s when we move to looking at load noise that we see our 6850 cards significantly separate. The reference 6850 was a tough card to beat here being that it was tuned for noise, but Asus did it, coming in at 45.3dB, quieter than any reference card in its class. Meanwhile the MSI and XFX cards do significantly worse; the XFX at 59dB is outright loud, but this was a conscious design decision on XFX’s part to focus on cooling over noise concerns. MSI on the other hand has a card with similar temperature characteristics as the Asus card, but does significantly worse than the Asus card when it comes to noise. It’s difficult to do a straight comparison here, as while both cards have the same load voltage, the MSI card has a much larger overclock than the Asus card. The MSI card still seems too loud for what it is, even though the amount of noise is comparable to the 5850 and other cards with a similar power draw.