Half of our results focus on our 6850s at their stock clocks, but the other half of our results focus on the card when it comes to overclocking. As a lower clocked Barts card, 6850 cards not binned for poor maximum clocks should have a fair bit of overclocking room as AMD intended for the design to hit 900MHz+. The 6850’s power efficiency pretty much has to go out the window here, but in return we can capture some significant performance gains.

When overclocking, we found 3 things:

While it’s possible to hit 960MHz with enough voltage, in practice it’s not worth the effort. The Asus and MSI cards jumped in power consumption, temperature, and noise by around 20W, 3C, and 2dB each, for a performance difference of under 2%.  On a higher-end card where performance is the only attribute that matters this wouldn’t really matter, but we would not consider this a useful tradeoff on a petite card like the 6850.

As for memory overclocking, we hit at solid wall at 1150MHz as none of our cards could do 1200MHz without artifacting. However 1150MHz didn’t trigger performance degradation due to error correction-induced retransmission, so it looks to be a safe frequency for all cards. The limit we believe lies solely with the memory controller, which was a conscientious decision by AMD to trade memory clocks for a smaller die. As a result the controller reaches its limit before we can even push the 5GHz GDDR5 to spec. 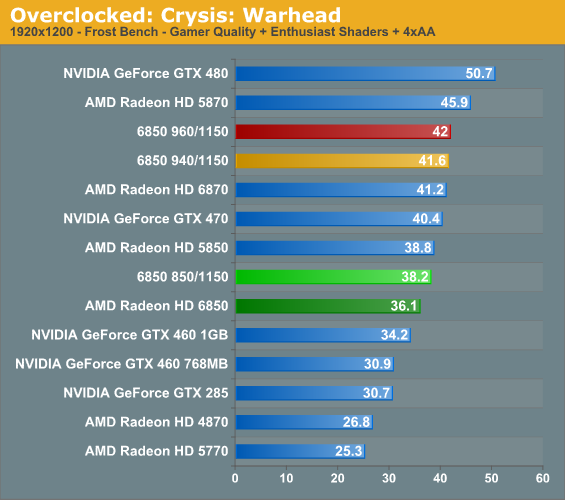 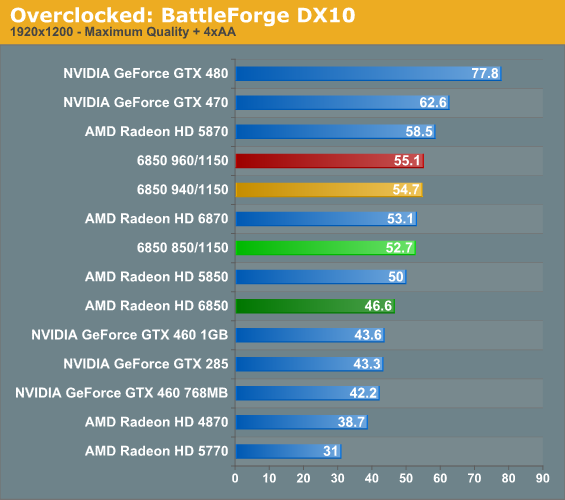 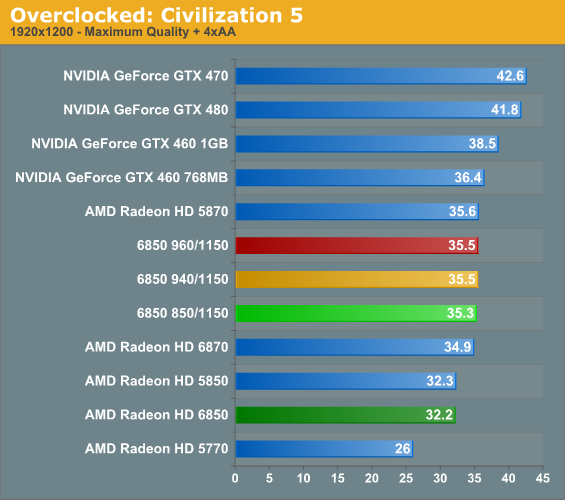 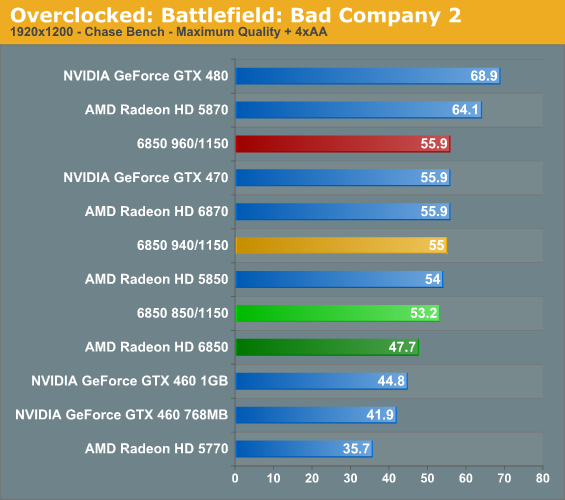 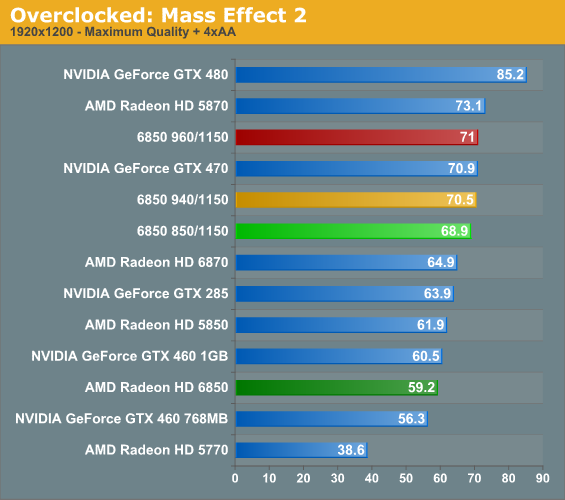 Something that caught us completely off-guard in our results is just how well the overclocked 6850 did. Even at the “mere” speed of 850/1150, it’s faster than the 6870 in 3 out of our 5 games; and the 6870 still has a core clockspeed advantage and more SIMDs! The advantage for our overclocked 6850s is that the memory clock of 1150MHz (4.6GHz effective) is faster than the 6870’s memory clock of 1050Mhz (4.2GHz effective), and this looks to be the reason for the difference. Based on all the data we have, Barts looks to be memory bandwidth starved in around half the games we use. From this it looks like a good memory overclock is going to go a long way on the 6850 and 6870 towards improving performance.

As for how much of an overclock is necessary, this depends on the game. When Barts is memory bandwidth starved, the 940Mhz and 960Mhz memory overclocks provide only a small boost; while on shader-bound games like Crysis there’s a very tangible benefit. Combine the memory overclock with a 940Mhz core overclock and the 6850 can meet or beat the 6870 every single time. The voltage increase necessary to achieve this core overclock comes at a price however. 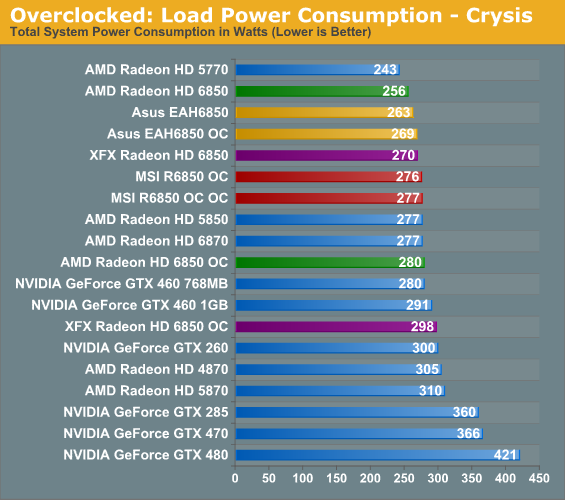 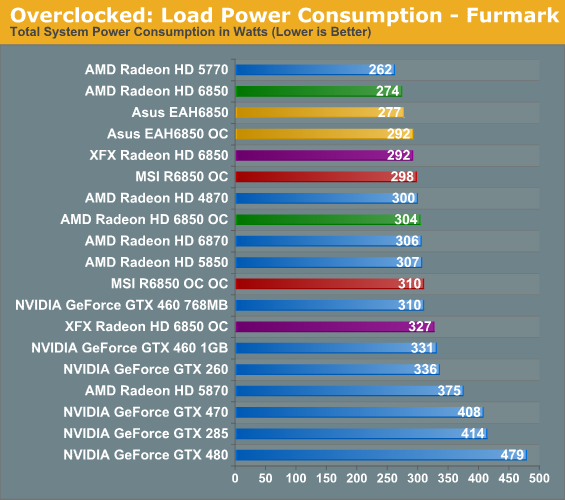 Starting with power consumption, the voltage increase necessary for 940MHz is around 20W-30W under FurMark for our reference and near-reference clocked cards, and less for the MSI card since it already has a notable factory overclock. If nothing else, 1.172v gives up all the power advantages over the Radeon 5850, though as we’ve seen it pays off with a very notable performance advantage over the 5850. 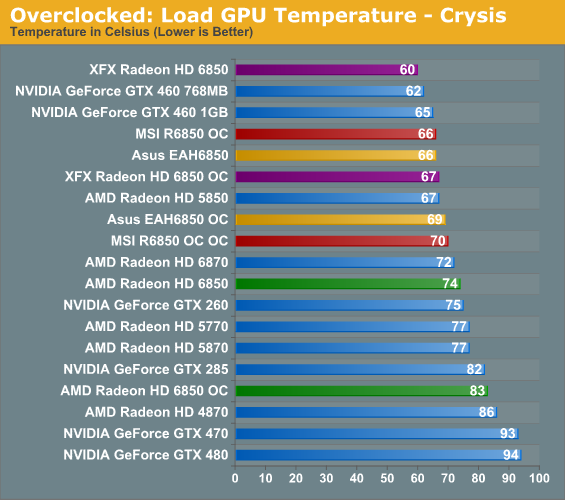 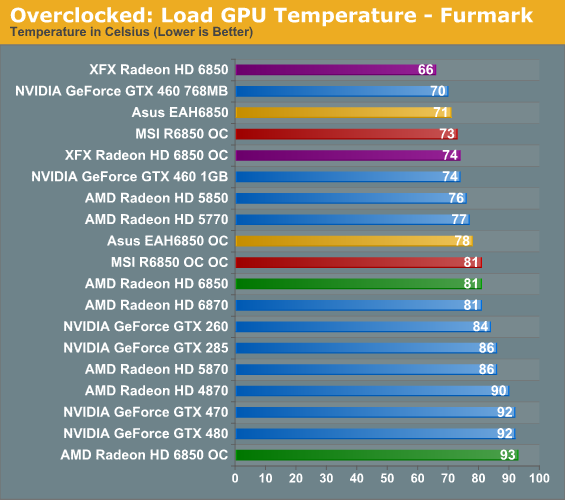 For the partner cards in today’s roundup, the temperature runup from overvolting isn’t too bad, with the worst card only hitting 81C under FurMark and becoming progressively cooler from there. However the reference 6850 is an entirely different story: it hits 93C under FurMark, which is hotter than what we’re comfortable with for Barts, particularly since it’s brand new. If reference-style cards show up on the market, we would not recommend overvolting them, at least not to 1.172v. Meanwhile the XFX card with its focus on temperature tops this chart, still only hitting 74C under FurMark. The cooling on this card is so good that we suspect the VRMs will burn up long before the GPU will when overvolting. 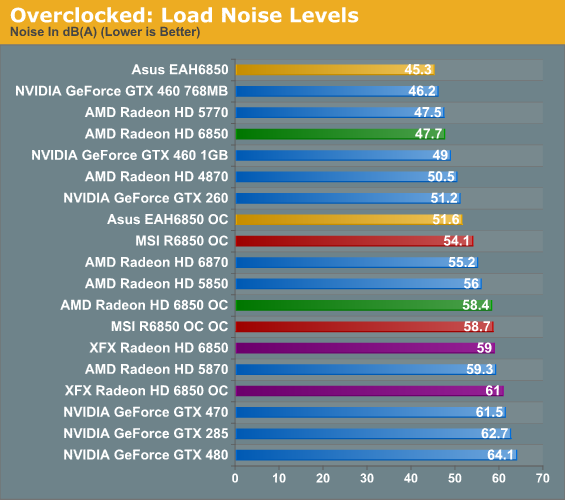 Finally we come to noise. We suspect many buyers will be alright with the power and temperature increases so long as noise remains manageable, so what we have is a mixed bag. Throwing out the reference 6850, we’re left with the XFX card at over 60dB, and while XFX’s focus on temperatures is commendable, it ends up being shortsighted by making the card exceptionally loud here. This is followed by the double-overclocked MSI card, which at 58.7dB is over 3dB louder than the 6870, but is only encroaching on the 5870. It’s too much noise for the performance, but compared to first-gen 40nm cards it’s not the end of the world.

This leaves us with the Asus card. While it does jump by 6dB due to our overclocking, it had such a massive lead at stock that this only makes it about as loud as the GTX 260 and Radeon HD 4870. The idea of a near-silent card has gone out the window at this point, but we would consider it a very manageable level of noise for the performance offed with the 940/1150 overclock. Certainly it’s the most balanced of the cards, as it sacrifices only little in the way of cooling (78C in FurMark) for the lower level of noise generated.