The performance of the three Kingston XS2000 SKUs in various real-world access traces as well as synthetic workloads was brought out in the preceding sections. We also looked at the performance consistency for these cases. Power users may also be interested in performance consistency under worst-case conditions, as well as drive power consumption. The latter is also important when used with battery powered devices such as notebooks and smartphones. Pricing is also an important aspect. We analyze each of these in detail below.

Our Sequential Writes Performance Consistency Test configures the device as a raw physical disk (after deleting configured volumes). A fio workload is set up to write sequential data to the raw drive with a block size of 128K and iodepth of 32 to cover 90% of the drive capacity. The internal temperature is recorded at either end of the workload, while the instantaneous write data rate and cumulative total write data amount are recorded at 1-second intervals.

The 2TB version with additional flash packages consumes slightly more power during active periods than the 1TB version, which in turn consumes more than the 500GB version. Peak power also follows a similar trend - 3.26W for the 500GB, 3.95W for the 1TB, and 4.74W for the 2TB. These are still much lower than the 8W+ for the FireCuda Gaming SSD and the WD_BLACK P50 and the 5.5W+ for the DIY SSD. The XS2000 also enters a deep sleep state with pretty much no power consumption from the host port after around 20 minutes of absence of any host traffic.

The Kingston XS2000 series manages to bring a high-performance native UFD controller-based portable SSD in a compact and attractive package. The most attractive aspect, however, is the pricing structure. The 500GB SKU is priced at $85, the 1TB version is just $135, and the 2TB SKU is at $240. One of the key advantages of a UFD controller-based solution is the reduced BOM cost, and this is brought out in the pricing structure. For comparison, a DIY 1TB solution ends up at around $180, while the WD_BLACK P50 is priced at $190. It can be observed that the single-chip solution ends up around $50 cheaper. In fact, the XS2000 is priced lower than some of the bridge-based USB 3.2 Gen 2 (10 Gbps / 1GBps-class) solutions in the market too. There is no doubt that the Kingston XS2000's value proposition is excellent. 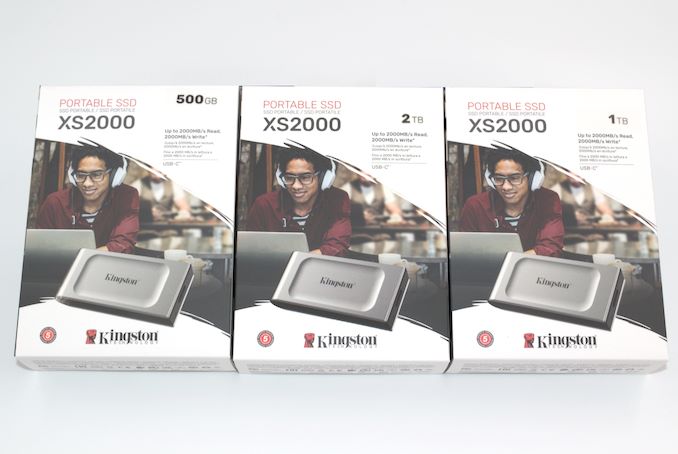 In terms of performance and consistency, the XS2000 SKUs behave similar to a DRAM-less PCIe 3.0 x4 NVMe SSD behind a USB 3.2 Gen 2x2 bridge. The 2TB SKU is perfect for most DAS workloads. Unless the end-user is expecting to work with more than 390 GB of data in one go, the effective SLC cache enables the drive to deliver performance rivaling that of high-end SSDs such as the SanDisk Extreme PRO v2. Obviously, under stressful scenarios with large number of random writes and / or after the running out of the SLC cache, the performance of the drive suffers much more than bridge-based solutions with high-end DRAM-equipped NVMe SSDs. That, however, is part of the price - performance trade-off. Another advantage is power efficiency. The single-chip solution with fewer board components sips power compared to the guzzling of the bridge-based solutions.

The effective SLC cache size and thermal design are major contributors to the user experience with portable SSDs. The limited SLC cache in the 500GB model (20GB - around 4% of the drive capacity) puts a spanner in the works, delivering a SATA SSD-like performance even under moderate stress. Our experience with the 1TB SKU was very similar to the one we had with the SM2320 reference design, with the thermal design managing to keep the SSD cool without extensive throttling. With a SLC cache of around 10% of the drive capacity, the 1TB SKU should tick most boxes for the average consumer. The 2TB version of the Kingston XS2000 is the real winner - It fits the requirements of a vast majority of the consumers without breaking the bank.

With the XS2000 portable SSD family, Kingston and Silicon Motion have managed to bring the benefits of USB 3.2 Gen 2x2 to consumers at mainstream price points. As host support for the standard expands, that is excellent news for the ecosystem.