Out of all of the ambiguously named Aorus series models such as the Elite, the Master, the Pro, the entry-level model in the GIGABYTE Aorus series is the Ultra. Known as typically one of the more affordable entry points onto GIGABYTE's more premium gaming-focused series, the GIGABYTE Z690 Aorus Ultra has plenty of premium features that solidify its position as a bridging gap between the more advanced models and its baseline models. Looking at the aesthetics, GIGABYTE has gone with a modern design with a blend of black and silver heatsinks throughout, with a funky Aorus logo embedded onto the top section of the rear panel cover. 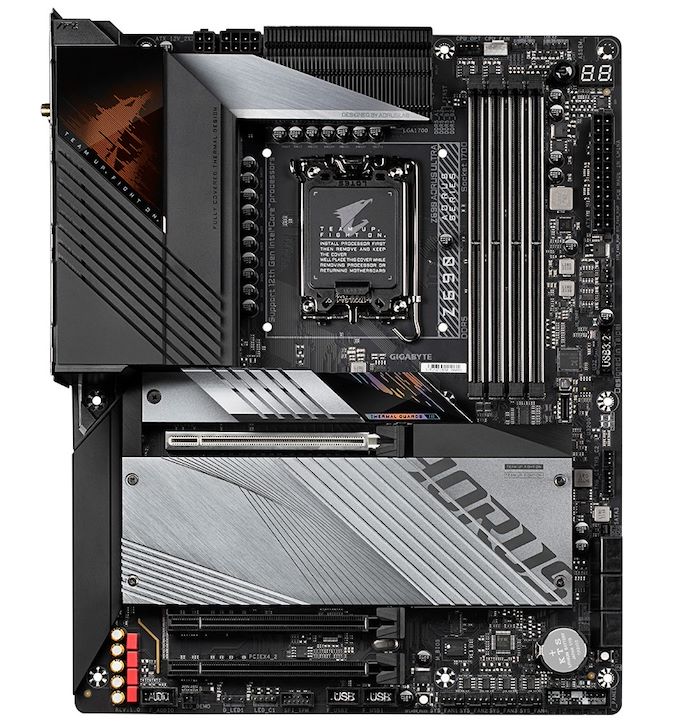 Focusing on expansion support, the GIGABYTE Z690 Aorus Ultra includes one full-length PCIe 5.0 x16, while the other two full-length slots are electronically locked down to PCIe 3.0 x4. For storage, the Ultra has four PCIe 4.0 x4 M.2 slots, with six SATA ports capable of supporting RAID 0, 1, 5, and 10 arrays. Located in the top right-hand corner are four memory slots, with support for DDR5-6200. and a combined total of 128 GB.