The ASUS Prime series of motherboards is perhaps one of its most key ranges. It represents the more affordable and entry-level segment, with functional features, wallet-friendly controllers sets, but all packed into a basic, yet elegant theme. The ASUS Prime Z690-A includes a futuristic black and silver design throughout, with plenty of premium features, and as such, sits more towards the mid-range than the entry-level. It includes a fanciful rear panel cover with the Prime series logo, with a black opaque panel just below this. The same design is present on the chipset heatsink, and the PCB is primarily black with white patterning. 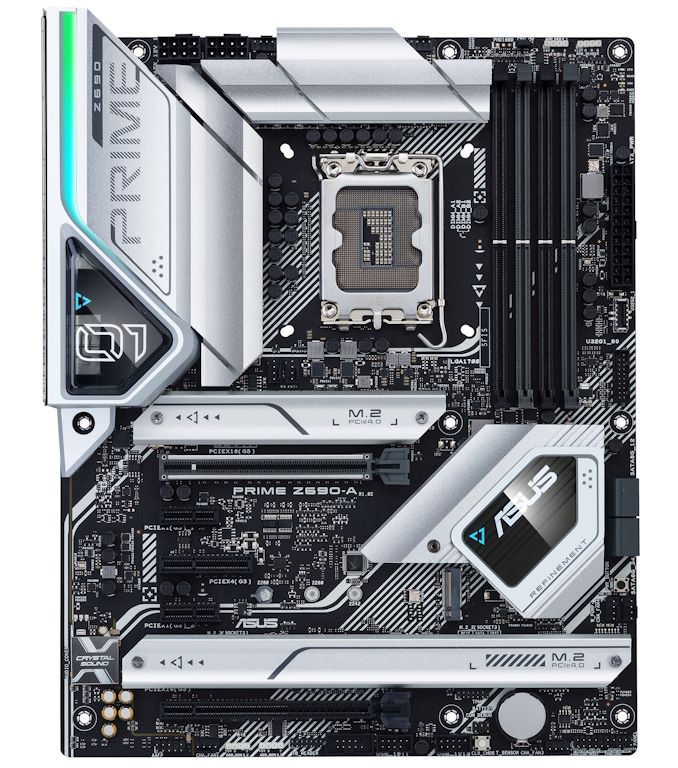 On the lower section of the ASUS Prime Z690-A is a varied selection of PCIe slots. At the top, ASUS includes a full-length PCIe 5.0 x16 slot, while at the bottom is a full-length PCIe 3.0 x4 slot. In between these is a half-length PCIe 3.0 x4 slot, with two smaller PCIe 3.0 x1 slots. For storage, there's a total of four M.2 slots, including three PCIe 4.0 x4 slots, one PCIe 4.0 x4/SATA slot, and four SATA ports. In the top right-hand corner is four memory slots that are capable of supporting DDR5-6000 and have a maximum capacity of 128 GB.