We’ve talked a lot about SVE (Scalable Vector Extensions) over the past few years, and the new Arm ISA feature has been most known as being employed for the first time in Fujitsu’s A64FX processor core, which now powers the world’s most performance supercomputer.

Traditionally, employing CPU microarchitectures with wider SIMD vector capabilities always came with the caveat that you needed to use a new instruction set to make use of these wider vectors. For example, in the x86 world, we’ve seen the move from 128b (SSE-SSE4.2 & AVX) to 256b (AVX & AVX2) to 512b (AVX512) vectors always be coupled with a need for software to be redesigned and recompiled to make use of newer wider execution capabilities. 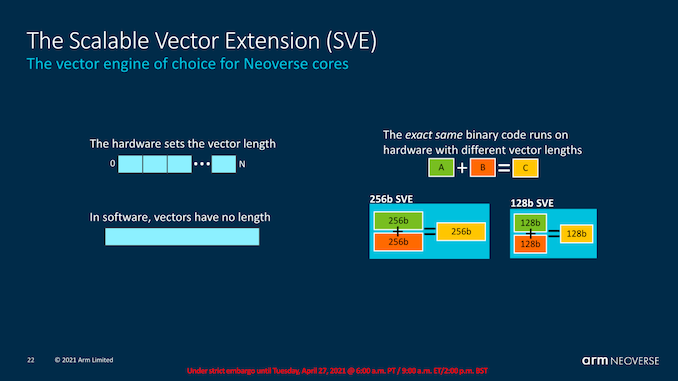 SVE on the other hand is hardware vector execution unit width agnostic, meaning that from a software perspective, the programmer doesn’t actually know the length of the vector that the software will end up running at. On the hardware side, CPU designers can implement execution units in 128b increments from 128b to 2048b in width. As noted earlier, the Neoverse N2 uses this smaller implementation of 128b units, while the Neoverse V1 uses 256b implementations.

Generally speaking, the actual execution width of the vector isn’t as important as the total execution width of a microarchitecture, 2x256b isn’t necessarily faster than 4x128b, however it does play a larger role on the software side of things where the same binary and code path can now be deployed to very different target products, which is also very important for Arm and their mobile processor designs. 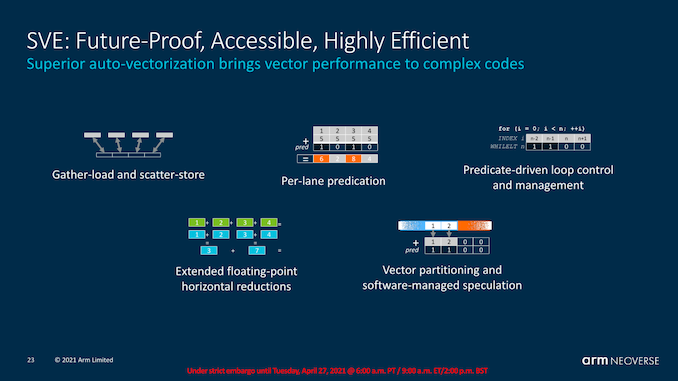 More important than the actual scalable nature of the vectors in SVE, is the new addition of helper instructions and features such as gather-loads, scatter-stores, per-lane predication, predicate-driven loop control (conditional execution depending on SIMD data), and many other features.

Where these things particularly come into play is for allowing compilers to generate better auto-vectorised code, meaning the compiler would now be capable of emitting SIMD instructions on SVE where previously it wasn’t possible with NEON – regardless of the vector length changes. 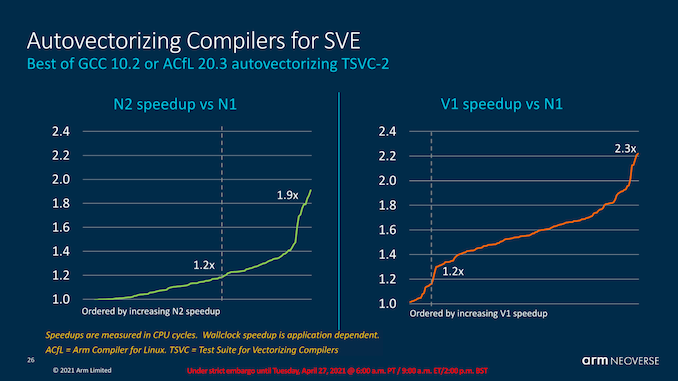 Arm here discloses that the performance advantages on auto-vectorizable code can be quite significant. In a 2x128b comparison between the N1 and the N2, we can see around 40th-percentile gains of at least 20% of performance, with some code reaching even much higher gains of up to +90%.

The V1 versus N1 increase being higher comes natural from the fact that the core has double the vector execution capabilities over the N1. 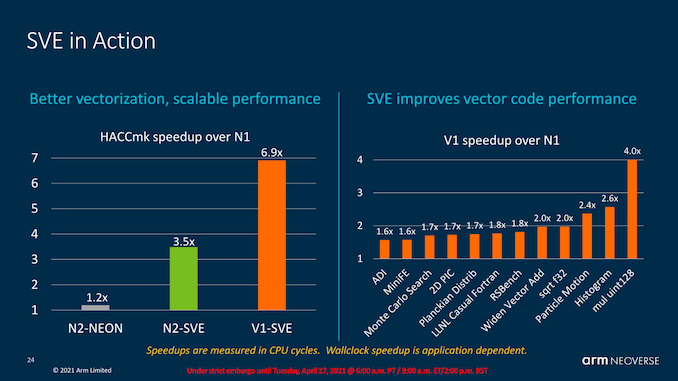 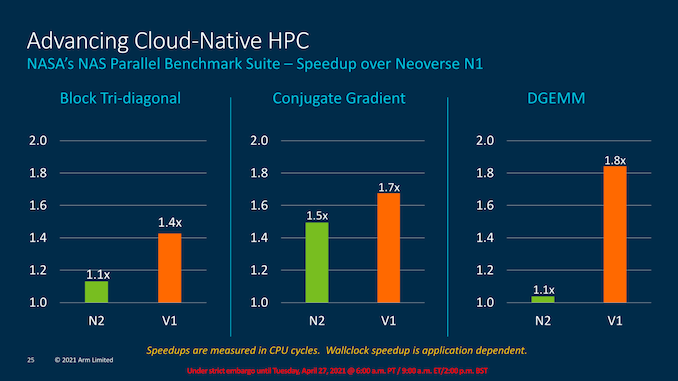 In general, both the N2, but particularly the V1, promise quite large increase in HPC workloads with vector heavy compute characteristics. It’ll definitely be interesting to see how these future designs play out and how SVE auto-vectorisation plays out in more general purpose workloads.