Another series of micro-ATX motherboards within ASRock's B560 stack includes the B560M-HDV-A and the B560M-HDV. Both models are visually identical with grey and black patterned printed PCBs, with a small silver chipset heatsink, but includes no heatsinks for the power delivery. The only difference between both models is that the B560M-HDV-A comes with an M.2 Key-E slot for users to install a wireless interface. 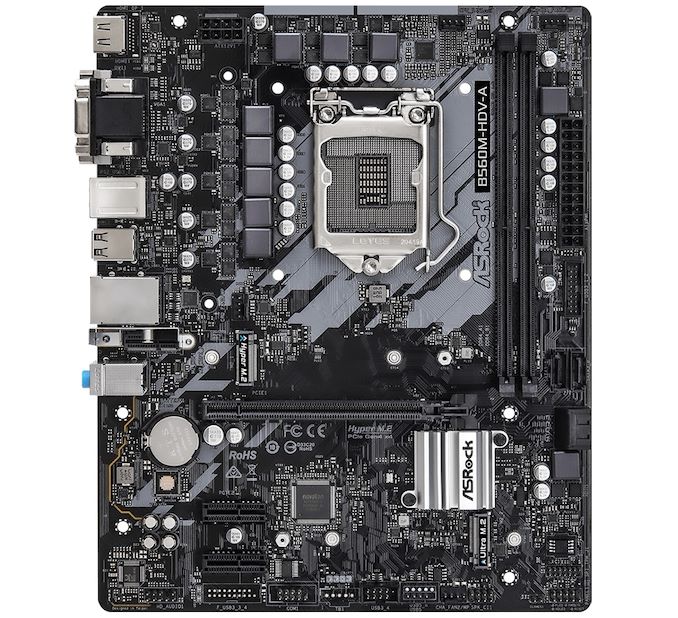 Both models include just one full-length PCIe 4.0 x16 slot, with two PCIe 3.0 x1 slots, as well as two M.2 slots. One of the M.2 slots is PCIe 4.0 x4 enabled, while the other includes support for both PCIe 3.0 x4 and SATA drives. ASRock also includes four SATA ports, two with straight-angled and two with right-angled slots, with all four featuring support for RAID 0, 1, 5, and 10 arrays. The ASRock B560M-HDV-A and B560M-HDV have just two memory slots, with support for up to DDR4-5000 and a total capacity of up to 64 GB.

The rear panel of both models includes four USB 3.2 G1 Type-A and two USB 2.0 ports. The only difference is that the A version includes an M.2 Key-E slot for users to install a wireless interface, which is located next to the three 3.5 mm audio jacks which are powered by a Realtek ALC897 HD audio codec. ASRock also includes three video outputs including a D-sub, DVI-D, and HDMI, with one PS/2 combo port for legacy keyboard and mice. Last on the rear panel of both boards is one Ethernet port driven by an Intel I219-V Gigabit controller.

At the time of writing, ASRock hasn't given us any information on the price of the B560M-HDV-A, although we do know the B560M-HDV has an MSRP of $75.